Antoine Fuqua’s Infinite elicits excitement — not for the film itself, but for Lana Wachowski’s untitled Matrix sequel arriving this year. The Mark Wahlberg–starrer reveals just how stuck Hollywood sci-fi is in 1999, when The Matrix cemented ideas of digital consciousness in the Western mainstream (with a bent of pan-Asian spirituality). Whatever the fourth Matrix entry brings, at least it won’t be a conceptual rehash of a movie that’s now old enough to order a drink.

Fuqua’s film starts out just fine. Wahlberg’s narration, while expectedly droll, quickly explains the premise amidst a propulsive car chase: Reincarnation is real, one group of re-incarnates (“The Believers”) are the ostensible heroes who help humanity, while the other (“The Nihilists”) are the villains. It’s simple enough to remember, and uncomplicated enough that when a trio of anonymous, attractive heroes mentions an item called “The Egg,” you can tell everyone is going to spend the rest of the movie chasing it, and you know who to root for.

And chase it they do, in a fun highway romp through Mexico City that rivals a Fast & Furious movie, but the film isn’t about any of the people we meet in this opening scene. This car chase is but a past-life memory for Wahlberg’s Evan McCauley, a lonely, out-of-work restaurant manager diagnosed with schizophrenia, who also has a photographic memory and knows a number of skills he shouldn’t — like how to craft an authentic katana from the Tokugawa period of Japan. McCauley has a lurking anger about him, which manifests as shaky, unstable close-ups when he’s provoked, either by the drug dealer who supplies his medication, or by a restaurant owner who holds his apparent mental illness against him. None of this visual panache carries over to later scenes.

Before long, McCauley is tracked down by a mysterious man named Bathurst (Chiwetel Ejiofor), who places a number of ancient items in front of him and asks him to recall which ones belonged to him in a past life, like he’s a Dalai Lama. To no one’s surprise, it turns out his hallucinations weren’t hallucinations at all. At the same time, McCauley is also tracked down by another group led by Nora Brightman (Sophie Cookson), which leads to yet another car chase before any of the story or stakes have been clarified. The action is amusing enough that this doesn’t matter — at least, not yet — because the film is at its best when dealing with heavily armed highway pursuits. Conversely, it’s at its worst when focusing on hand-to-hand combat and reincarnation lore, which, unfortunately, takes up most of the film’s runtime beyond its first half hour.

Ejiofor has an intriguing presence as the scenery-chewing Bathurst, the first movie villain in ages whose end-of-the-world scheme actually has a compelling rationale. That said, his function is entirely to drive the plot forward, and the film rarely stops to consider him as a character with real psychology. Sadly, he isn’t alone. McCauley, similarly, is beholden to the film’s mechanics and the late-in-the-game introduction of Assassin’s Creed–like concepts, involving digitally diving into past lives to learn new information and skills. Meanwhile Nora, like most of the other characters, doesn’t have any meaningful motivation beyond vague notions of allegiance to an existing clan.

The film grinds to a halt when McCauley arrives at Nora’s island hideout, The Hub, a temple-dojo adorned with Buddha statues and populated by re-born warriors, or “infinites,” whose cars and private jets are stamped with infinity symbols like they’re representatives of 8chan. You would think the group’s wealth and resources would lead to a meaningful thematic dilemma for the down-on-his-luck McCauley (or at least warrant an explanation), but The Hub chiefly serves to populate the background with cutouts resembling a real and diverse group of people. There’s the Scandinavian brawler, Kovic (Jóhannes Haukur Jóhannesson), who gets a few fun throwaway lines. There’s the tech expert, Garrick (Liz Carr), a wheelchair-user who resembles Edna from The Incredibles and disappears after a couple of scenes. And finally, there’s Japanese fight-trainer Trace (Kae Alexander), Hollywood’s umpteenth East Asian woman whose only distinguishing characteristic is brightly colored hair, and whose near non-presence rounds out the film’s bizarre relationship to Asia and Asian-ness.

Modern western sci-fi lives in the shadow of Asian ideas and aesthetics, from Blade Runner’s Tokyo-inspired cyberpunk to the vaguely Buddhist, Taoist and Hindu philosophies that birthed Star Wars and The Matrix. These are well-worn genre tropes by now, but the problem arises when such properties and their descendants continually offer mish-mash versions of these ideas while centering the journeys of Caucasian heroes, without meaningfully contextualizing either their settings or their characters.

Infinite, for instance, frames its version of reincarnation as unique, wherein the characters’ actions in their past lives have ripple effects on their present circumstances. McCauley, a more well-read character than Wahlberg’s doltish performance suggests, is surprised by this version of rebirth and suggests Buddhists, Hindus and Sikhs “believe each life begins with a clean slate,” which is untrue. This is the entire basis for the concept of karma. The film also reduces Angkor Wat, a Cambodian temple with significance to both Hinduism and Buddhism, to a romantic destination across several lives for two characters portrayed by white actors. The only past avatar of McCauley we’re shown is a Japanese blacksmith, and while having his present incarnation be a white man it isn’t inherently a problem, these nagging issues — in which whiteness is constantly centered, and Asian ideas and characters are brushed aside — add up to a frustrating whole. This is made all the more unsettling by the fact that McCauley is played by an actor who once attacked two Vietnamese men while yelling racial slurs. The best thing you can say about the film’s optics is at least it only borrows Cloud Atlas’s themes, rather than its yellowface.

Whether or not these optics offend one’s sensibilities, the way they manifest in the story ultimately makes it less engaging. Once the film moves past its initial action — and once it finally establishes its actual premise, some 40 minutes in — it half-heartedly attempts to weave together religious notions of the soul with ideas of digital consciousness, the way The Matrix did, but it devotes practically zero time to them, or to the way they influence McCauley as he learns about his past. Its philosophy is all window-dressing.

Worse yet, the film is fully aware of its Matrix influence. It telegraphs as much via a slow-motion shot of bullets passing over a character’s shoulder as he holds up a spoon, seemingly for no other reason than The Matrix had similar effects and a famous spoon-centric scene. Infinite, of course, deals with none of the same themes of illusory reality, and copies the Wachowskis’ ideas only superficially, like a protagonist who learns to control and manipulate his surroundings. While Neo learned kung-fu and other skills when they were downloaded into his brain, his self-actualization was entirely his own. Infinite, on the other hand, treats these concepts as one and the same, resulting in a lead character whose most important beats are born of remembering the experiences of someone else entirely.

Fuqua does what he can to sprinkle garnishing on cold leftovers, adding dolly-zooms and digital wobbles to imbue the action with momentum. However, the script (by Ian Shorr, based on a story by Todd Stein) barely holds together, and seems to emanate from an alternate reality where no other sci-fi films or games were released in the last 25 years. Perhaps Infinite suffers from some studio-mandated trimming — every scene feels shorter than the last, as if the film were being rushed to its conclusion, and an important character played by Rupert Friend is all but relegated to an extra — but the finished edit also hints at some unfixable structural oddities. Certain events, like the villains invading the heroes’ hideout, seem ordered to minimize tension, while conversations about characters “recognizing’” each other from past lives don’t gel in the slightest with what the film presents: different actors playing these new avatars, who have no deeper spiritual connections between them.

This is ultimately the film’s biggest dramatic problem. No character is lit, shot or even performed like they have a real history with anyone else; they’re all strangers, when they should be more. The most they have by way of ethos is when they yell words like “friendship!”or “cynicism!” at each other ad nauseam like they’re in a Meisner class. McCauley, despite finally being surrounded by other “infinites” like himself, continues to feel isolated the way he did when his story began. Nora, the closest thing the film has to a supporting character, serves only an expository function, as she guides McCauley through the plot, and micro-doses him with information the audience has already learned. Not every film needs an obligatory heterosexual romance, but Nora already has a romantic subplot built-in, concerning a character who doesn’t really appear on screen; retooling her romance to be with McCauley would have given them both something to do.

However, like so much of modern Hollywood, Infinite isn’t just a movie, but the creation of franchisable intellectual property. There are plenty of setups for future stories, and hints about characters having richer lives outside the frame, but none of their interactions with McCauley carry over that supposed richness. The one exception to this is a seemingly gender-nonconforming “infinite” played by Jason Mantzoukas, who brings so much life to his brief screen-time that he feels out of place amongst the film’s dead weight (to say nothing of its unconfronted gender essentialism, with the same souls conforming to the same kinds of bodies over thousands of years).

Ultimately, even Mantzoukas’ character exists to set up a sequel that may never happen. This closing tease is much more interesting than the rest of the film, one of many unfortunate traits Infinite shares with The Old Guard, Netflix’s less-than-stellar Charlize Theron vehicle about immortal warriors protecting humanity throughout time (both films, oddly enough, have the exact same clunkily written joke about characters misunderstanding which century someone refers to). Infinite was originally scheduled to come out a month before The Old Guard, but now that it’s been unceremoniously dumped on Paramount+ a year later, it not only has the misfortune of resembling a better film from 1999, but an equally poor one from just last year. 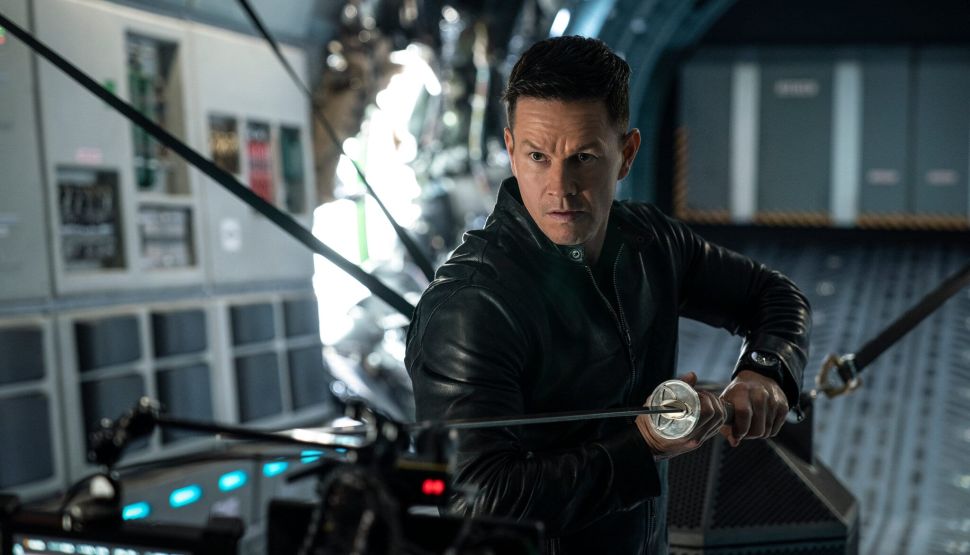