The globally famous French artist JR has been particularly prolific within the last couple of years, and now, the ambitious creative has a new project on the horizon: JR announced that he’ll be creating a new project at the iconic Pyramids in Giza, Cairo in October. Only just recently, JR recaptured attention for his installation at the Eiffel Tower in Paris. For that particular project, JR created a massive trompe-l’oeil beneath the iconic tower that makes it appear as though a canyon is opening up underneath it. However, it’s as yet unclear what JR will be doing with the Giza pyramids.

“This is not a photomontage…but the art work in October might be a photo collage,” the artist wrote on Instagram. Of course, JR has long been known for his large-scale collages; the artist and his team put together a billboard in San Francisco in 2019 that featured a compilation of photographs of faces seen all around the city. Plus, in tandem with his Brooklyn Museum exhibition “JR: Chronicles,” the artist put together a monumental work called The Chronicles of New York City that was similar in format to the San Francisco billboard.

If collage is one theme that runs consistently through JR’s output, proximity to gigantic pyramids is certainly another. In 2019, the artist also arranged thousands of pieces of paper in the Louvre’s iconic Paris courtyard; this created a visual effect that transformed the museum’s pyramid entrance into a gigantic, ancient-feeling structure that receded into the crust of the Earth’s surface.

Like KAWS, whose latest project involves taking his enormous Companion hot air balloon all around the world, JR seems to thrive in a maximalist sphere, and he trades in bombast rather than subtlety. “I’ve never been so excited to work on a project, this is an incredible site and I can’t wait to come back to the Pyramids for the installation,” JR told The Art Newspaper when discussing his upcoming Giza outing. 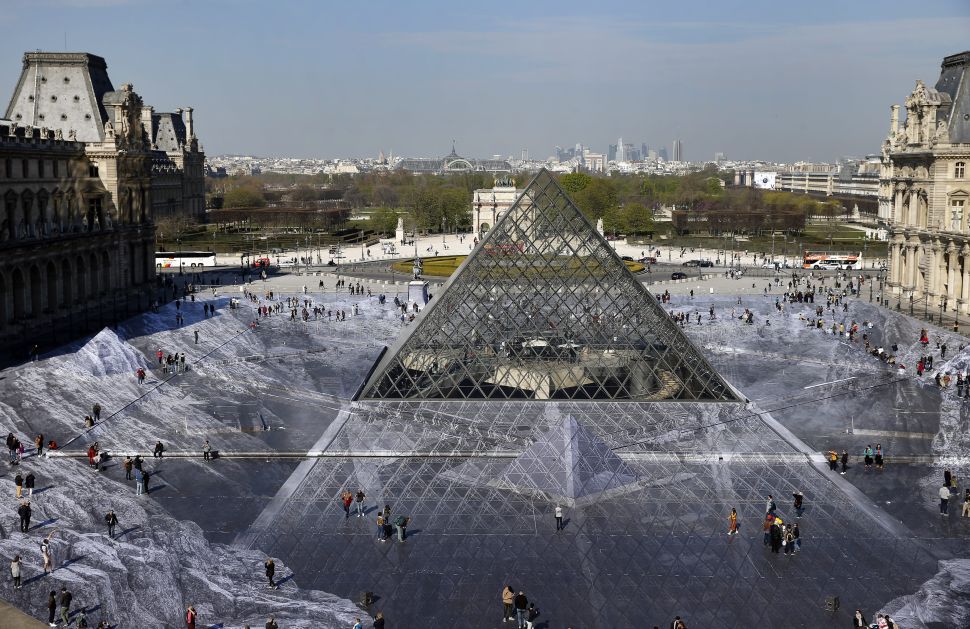