From WandaVision‘s 4th-wall-breaking deconstruction of sitcoms, to Legion and Doom Patrol‘s extra-dimensional weirdness, superhero TV is becoming as varied and unafraid to go full comic-book, but there are few shows as successful in their strangeness as DC’s Legends of Tomorrow. In six seasons on The CW, the show has gone from just another Arrow spin-off to staging a teddy bear fighting a demon, a unicorn biting a man’s nipple off, and now, the show pulling off its best and craziest stunt yet: an animated Disney Renaissance-style animated sequence.

This season finds the titular Legends having to seek out and capture a group of aliens who have escaped captivity and spread out across the timeline. In the meantime, they are also looking for their leader Sara (Caity Lotz, who also directed the latest episode), who was kidnapped by aliens. The latest episode finds Astra (Olivia Swann) getting duped by occultist Aleister Crowley into performing a magic ritual that backfires and turns her into a ’90s Disney princess, together with talking furniture and an inability to speak without singing.

Though the scene is not that long, it still makes an impact. It’s funny, bonkers, beautifully animated and is somehow both completely out of place and also a perfect fit for the show. What makes the episode interesting is that returning director Caity Lotz had never worked with animation before.

I called some TV directors I know and asked, ‘Hey, uh, do you know how this works?’ And everyone was like, ‘Oh, I’ve never done that before. I have no idea!’

“I was definitely surprised when I read the script, and I was quite nervous,” Lotz tells us. “I had no experience whatsoever with animation, so I called some TV directors I know and asked, ‘Hey, uh, do you know how this works?’ And everyone was like, ‘Oh, I’ve never done that before. I have no idea!’ So that was challenging, but as soon as I started working with the animation team, I felt much more confident and secure.” That animation team from Warner Brothers Animation was led by industry veteran Tony Cervone, who has worked on everything from Animaniacs and Duck Dodgers, to directing the animation in Space Jam and the recent Scoob! movie.

Even though she wasn’t as experienced as the animation team, Lotz had a clear idea of what the animated sequence should do and look like. As Astra gets transformed by an evil Crowley, we see her slowly turning into an animated Disney princess, while the rest of the room remains in live-action for a brief moment, until everything else turns into a cartoon.

“Tony and his team have been doing this for so long that they pretty much knew what to do from the beginning,” Lotz explains. “I basically got to do the fun part, like asking if they could add a few shots here and there. The biggest thing was that I’ve always loved live-action animated hybrid films like Space Jam, so I wanted to have a moment where we got to see cartoon Astra in the real world. So we came up with that transition for when she first gets hit with the spell and starts transforming, but before everything else follows suit.”

“I also wanted to make sure we got some input from Olivia [Swann] who plays Astra so I wanted to be sure we got her freckles right because Olivia’s got these great freckles,” Lotz added. “It was also about making sure her skin tone was right and matched what her actual skin tone looks like.”

The sequence has a clear WB animation look to it, especially in Crowley’s evil “prince,” who is less angular than he is made out of slightly more straight lines. Still, there is no mistake that this is a Beauty and the Beast homage, with the character designs and the animation itself resembling the Disney Renaissance period more than the hand-drawn meticulousness of the Golden Age. This was important for Lotz. “The amount of money and time was limited and rushed, but I like that we did more of the Disney animation that I grew up with. So it’s not like a Pixar, life-like movie, but old-school, Beauty and the Beast-like animation which I love.” That being said, Cervone and his team also added their own homages and nods to other periods of Disney animation history, including having Crowley turn into a giant, Chernabog-inspired demon and almost eat Astra.

Speaking of Beauty and the Beast, the segment is full of references and homages to the Gary Trousdale, Kirk Wise, and Don Hahn classic. From the melodies of the songs Astra sings, to talking household objects (the rest of the Legends team, who got turned into talking objects by an angry Astra). Even before the episode goes animated, we still get puppetry animation for the talking objects, like a wheel of cheese, the obligatory chandelier, and a talking painting where Crowley’s soul is trapped.

“That took us a long time to figure out how to animate,” Lotz explains. “How should their mouths move? Do we go full CG or do we try practical and then add CG on top? Do you make a fork move and jump around? And then you have to figure out blocking and how to make the movement interesting since these are objects that can’t do that much.” The end result uses practical objects, with CG touches to aid with the animation. As the actor/director explains it, “After the props were built and we had done the first CG tests, I felt this was going to work.”

Of course, animation takes a long time, and with actors shooting different episodes at different times, it meant a more arduous and out of order planning schedule. According to Lotz, they had to shoot the transitions to and from the animated sequence first so they could get that to the animation team so they could use that footage as a base for the animation.

The end result is pure Legends of Tomorrow magic; a bonkers, bizarre, funny experiment that still delivers the deepest and best character moments of the season. Back in season 3, we got a Groundhog Day-inspired time loop episode that properly turned a new character into a member of the team. Season 4 had a meta TV episode where the show parodies everything from Mister Rogers’ Neighborhood to Star Trek and Friends, which served to have the members of the team work out their inner conflicts.

This time, an animated Disney princess sequence also serves to juxtapose Astra’s past as part of a fantastical world of magic and power, and the mundane, boring life she’s living as a mortal. Many shows can do “special episodes” or parody segments, but Legends of Tomorrow constantly shows how to do it while not sacrificing character moments.

DC’s Legends of Tomorrow is available to stream through The CW. 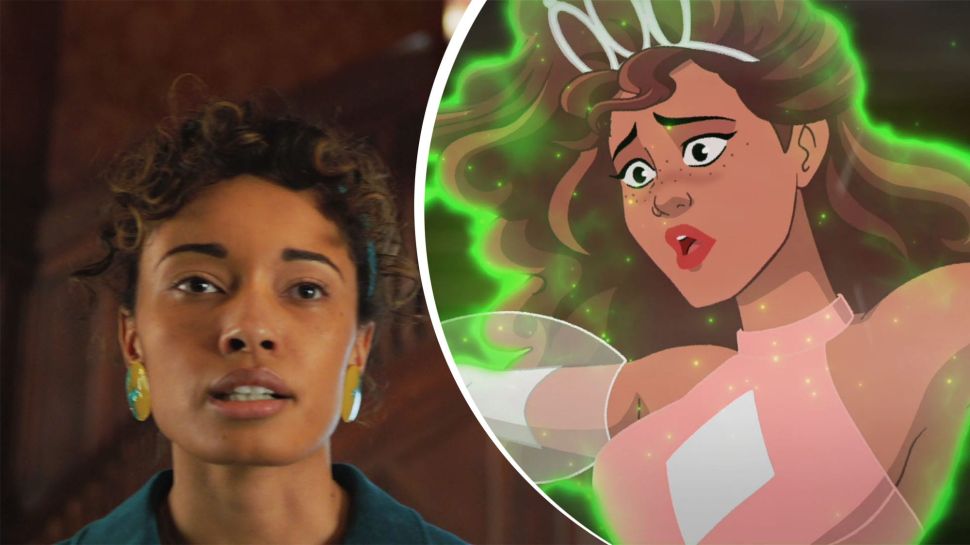