June is Pride Month, a time to celebrate the LGBTQ+ community. Pride takes place in June because it’s the anniversary of the 1969 Stonewall Riots, a watershed moment in the fight for LGBTQ+ equality. This year, President Joe Biden issued an official proclamation recognizing June as Pride Month, and reiterated his administration’s promise to fight for equality for the LGBTQ+ community to be codified into law.

Now that the world is starting to open up again (just in time for summer), this year’s Pride celebrations will surely be bigger than ever, and there’s never been a better time to go all out with festivities.

You’ll surely want to dress accordingly, but before you go out and buy the first rainbow-splattered item you see, make sure you’re shopping with purpose. While many brands release Pride collections in June, not all of these designers actually give back to the LGBTQ+ community. Instead of contributing to this kind of performative activism, this year, take the time to ensure you’re shopping from brands that support the LGBTQ+ organizations.

Below, see the fashion and style brands that are giving back to the LGBTQ+ community for Pride Month.

The celeb-adored athleisure brand, which counts Hailey Bieber, Kaia Gerber and Kendall Jenner as fans, launched its first-ever Pride Collection this year, with 100 percent of sales from the limited edition drop donated to The Trevor Project, a nonprofit that provides crisis counseling and suicide intervention for the young LGBTQ+ community. Alo Yoga.

Polo Ralph Lauren released a perfectly preppy Pride collection this year, and is donating 25 percent of net proceeds from each purchase to the Stonewall Community Foundation. Polo Ralph Lauren.

Coach launched its second-ever Pride Collection on May 27, with plenty of ’70s-inspired apparel and accessories. The brand’s Coach Foundation also donated to its longtime partner the Hetrick-Martin Institute, in addition to the Albert Kennedy Trust, Point Foundation and CenterLink Community of LGBTQ Centers. Coach.

Toms is releasing a two-drop Unity Collection this year, with Pride-inspired rainbow-themed shoes and sunglasses. The brand gives a third of net profits to grassroots programs including Brave Trails, a summer camp for LGBTQ+ youth. Toms.

The sustainable jewelry brand is donating 100 percent of the proceeds from their new Equality collection to The Trevor Project. With Love Darling.

Ugg just launched a cozy new rainbow-colored collection for Pride, with plenty of fuzzy slippers, socks, sweatshirts and more. Starting May 20, the brand is donating $25 from every purchase of the Disco Stripe slides to GLAAD. Ugg.

Fashion designer Christian Siriano partnered up with Burst Oral Care on a custom-designed, limited-edition Expanding Floss kit and rainbow-accented face mask; $25,000 of the proceeds from the collection will be donated to The Trevor Project. Burst Oral Care.

The chic and comfy shoe designer has partnered up with the It Gets Better Project, and is donating 100 percent of the net profits from the newly launched, limited edition Ollie Heart sneakers to the nonprofit, which works to empower and connect LGBTQ+ youth all around the world. Stuart Weitzman.

Versace and Lady Gaga’s Born This Way Foundation have partnered up on a limited edition collab for Pride, as well as in honor of the 10th anniversary of the Grammy Award-winner’s Born This Way album. A portion of all sales from the collection, including this rainbow-inspired tee, are donated to the Born This Way Foundation, which supports the mental health of young people and its longtime allyship with the LGBTQ+ community. Versace.

Throughout the month of June, handbag brand Brahmin will donate 10 percent of the purchase price from their brightly colored Pride collection to GLSEN, a nonprofit foundation that works to end bullying and discrimination of the LGBTQ+ community. Brahmin.

Gap just launched a new Pride capsule collection; the items feature messages of unity and love. The brand is donating $50,000 to GLAAD. Gap.

Modern Picnic collaborated with Zac Mathias on a limited edition Pride Collection, including this adorable vegan leather tote with a special insulated snap pouch, and is donating 20 percent of proceeds to The Trevor Project. Modern Picnic.

For Pride Month, Awe Inspired released a new Goddess Necklace in honor of Marsha P. Johnson, with 100 percent of the proceeds donated to the Marsha P. Johnson Institute, which works to help protect and defend the rights of the Black transgender community. Awe Inspired.

Rue21 just released their rainbow-covered Pride Collection in partnership with The Trevor Project, and the clothing brand is also donating $50,000 to the nonprofit. Rue21.

This cozy and stylish rainbow sweater is perfect for this time of year, and the brand is donating 15 percent of sales to The Trevor Project. Ellsworth + Ivey.

Michael Stars relaunched their Love tee for Pride Month, and the brand is donating 25 percent of the proceeds to Lambda Legal, a civil rights organization that fights for the LGBTQ+ community. Michael Stars.

Teva recently released a new collection of gender-inclusive sandals for Pride, and is donating $35,000 to the Human Rights Campaign. Teva. 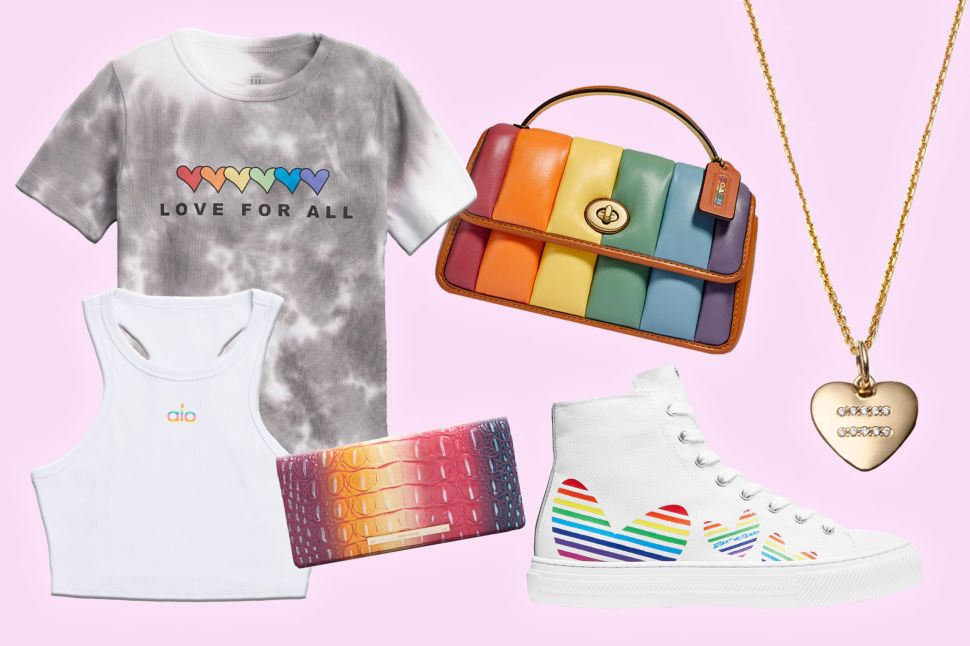