DJs for Pride, take note: the hottest song for this season’s playlist isn’t a dance bop or a breakup banger. It’s a jam about sperm.

Kate’s part of an all-lesbian commune in Montana, and she’s come to New York City to give her broke and estranged nephew Judy (Bowen Yang) an opportunity: help her steal the powerful men’s sperm, sell it to well-paying Russians, and use the money to build a new all-queer island paradise, New Lesbos.

The sperm is kept under lock and key in a government bunker fathoms beneath the Space Needle. Judy’s not sold on the task; it’d be a lot to pull off, and security’s tight. (“The facial scanner is a bit out of date,” Kate recounts, “but the password is case sensitive.”)

Still, what else does meandering and unemployed Judy have to lose? Judy becomes the series’ unwilling protagonist and enlists a potpourri of queers to help get the job done: Toby (Bianca del Rio), a drag queen who’s a master of disguise; Eve (MJ Rodriguez), a hacker extraordinaire; and Ben (Cheyenne Jackson) and Sam (Abbi Jacobson), bisexuals who are in an opposite-sex relationship, live in the suburbs, and—most importantly—have a car. Heigh-ho, Seattle!

What follows is a fast-paced and darkly gleeful caper that features tip-top voice performances from a host of queer celebrities including Jane Lynch, Shannon Woodward, Margaret Cho, and Brian McCook as Katya Zamolodchikova. Even Angels in America playwright Tony Kushner makes a cameo, rhapsodizing on the role of sperm in high art. The podcast is impeccably produced (sound designer and mixer Jeremy S. Bloom masterfully places us in airports, city streets, and corporate offices), and the original music is highly cinematic—you can envision diagonal split screens during scene transitions when Charlie Rosen’s spy thriller scoring roars in.

Hot White Heist is a feast for the ears and a workout for the abs. For moments of comedic gold, look no further than Katya’s Russian-agent line reading of, “’allo, this is the lesbians?” and the pitch-perfect name of Toby’s gay bar (Surrender Dorothy). Jokes resurface, compound, and gain depth: that “out of date” facial scanner? Toby contours his way past it.

Goldman packs the script with his signature biting, New Yorky sense of humor. When Judy agrees to fly to the Montana commune, it’s under one condition (“We’re not flying out of Newark; I’m not an animal”), echoing another Goldmanism found in his trend-setting and sparkling web series “The Outs.” When that series’ similarly sardonic protagonist asks his coworker where people land after getting fired from their day jobs, the coworker quips, “Queens.”

Hot White Heist features zany gags by the wad-load, but beneath the froth is a cutting exploration of queer people profiting off of heterosexuals. Normally, it’s the other way around: straight people adopt fashions that queer people popularize, get awards and big paychecks for playing LGBTQ+ characters, and even garner followings on social media by engaging in homoerotic acts without having to move through the world as a queer person.

The podcast, then, serves a tale of straight cum-uppance: heterosexual culture is weaponized against its tastemakers. To buy time mid-break-in, Toby asks some guards to explain blockchain. Later, Judy begrudgingly enlists an old flame, Edward Lewis (Jonathan Bailey), who surrenders to the police tailing the crew. “I’m a conventionally attractive white gay man with a sexy accent who can pass,” says Edward, a white-collar corporate drone. “Laws don’t functionally exist for me.” For queer people who have felt at sea over the past year—with gay clubs shuttered and inclusive events postponed—we might be craving a trip to our own idealized New Lesbos. And who wouldn’t steal the straights’ goods for a taste of paradise? A vibrant queer haven in its own right, Hot White Heist might be its own audial utopia. 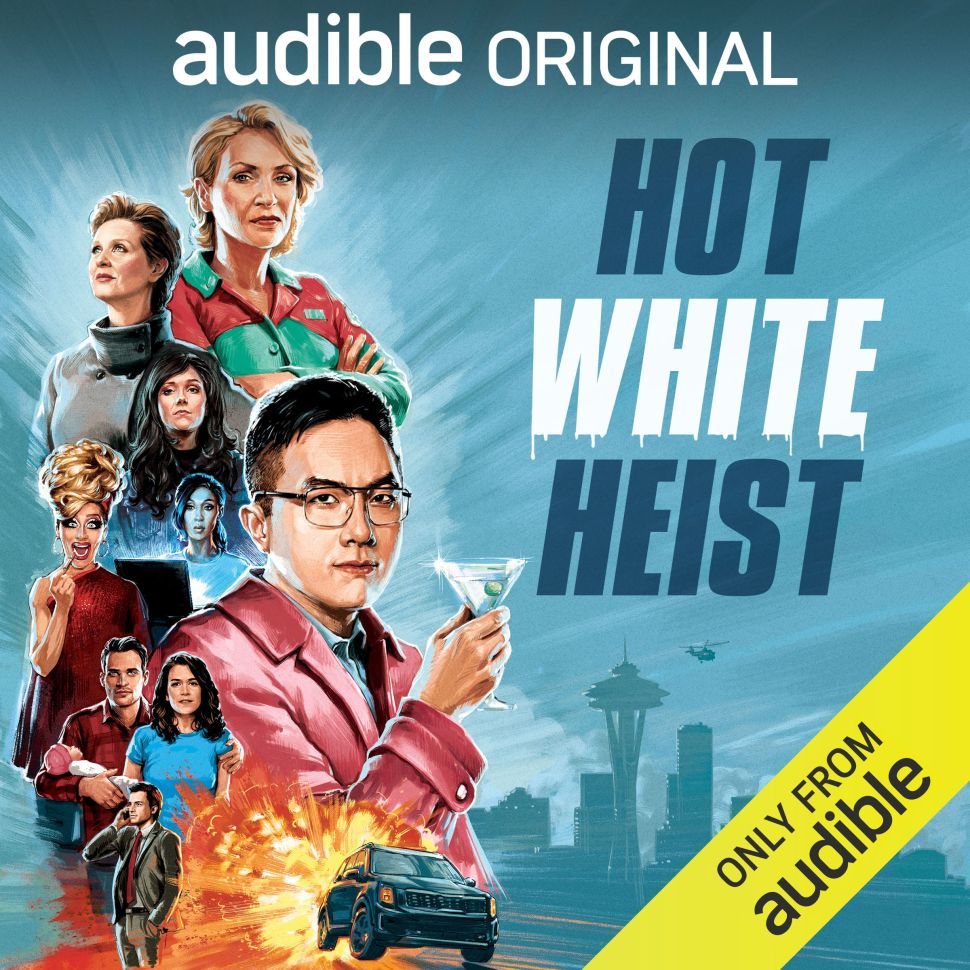