Dancers sweat and breathe heavily; opera singers blast their voices at audiences with incredible force — that’s why we love them. But for the past year and a half, admiring their skills in enclosed spaces has carried a potential health risk. Well, 133 million-plus Americans have been fully vaccinated. I’m guessing a lot of them include aficionados of the performing arts. I don’t recall the CDC saying vaxxed folks can’t enjoy ballet or opera together, given precautions.

Like every arts organization, dance and opera companies have adjusted to the new normal of digital and streamed options. Some of these events are online exclusives, captured in California at Palm Springs, up in Buffalo, New York or here in the city. Others are blessedly in-person and local. Wear a mask, show proof of vaccination and let the perspiration and fortissimo commence.

Stellar presented by Baryshnikov Arts Center (June 7–21)
Afrofuturism and jazz are two touchstones for this “speculative fiction” work by choreographer Kyle Marshall. The dance maker says he wants audiences to free the cosmos within us. The piece was captured on location at the Jerome Robbins Theater with performers Bree Breeden, Kyle Marshall, and Ariana Speight.

The Road We Came presented by On Site Opera (through July 31)
On Site Opera combines site-specific opera, Black history, and app technology in this unique event. You purchase pre-recorded content that streams to your phone and take a walking tour of historic sites in three locations: Lower East Side, Midtown, or Harlem. Landmark stops on the tour include poet Langston Hughes’ home, the gentrification zone of Lincoln Center, and the African Burial Ground National Monument.

Trisha Brown: In Plain Site presented by Wave Hill (June 8–9)
Iconic modern choreographer Trisha Brown brings a selection of work to the scenic gardens of Wave Hill in the Bronx. Audiences stand and follow performers who share an excerpt from Another Story as in falling (1993), as well as Accumulation (1971), Leaning Duets (1970), Solo Olos (1976), and others. Between bows, your eye may be drawn to breathtaking views of the Hudson River and Palisades.

Alvin Ailey American Dance Theater presented by Cal Performances at Home (premieres June 10)
The legendary company presents an online concert, including the world premiere of Holding Space, a newly commissioned work by resident choreographer Jamar Roberts, along with films celebrating the 50th anniversary of Alvin Ailey’s Cry and his signature masterpiece, Revelations. The program can be subsequently streamed through September 8.

Virtual DUMBO Dance Festival presented by White Wave Dance (June 10–13)
Get ready for a four-day marathon of dance from around the world. White Wave Dance has curated a digital smorgasbord of movement: 60 troupes, over 350 artists from Mexico, Hungary, China, and Korea doing solo, chamber, and full-scale works. All are streamed, so get comfy on the couch. Or at the barre.

The Second Sight presented by Sotto Voce Vocal Collective and Nickel City Opera (June 26–27)
Fascinating young composer Jessie Downs explores supernatural themes and the bond between mother and daughter in this mystical new opera. A clairvoyant woman who foretells a child’s death tries to intervene and thwart tragedy. Mezzo-soprano Ola Rafalo plays the heroic Diskana, and the production is co-directed by Valerian Ruminski and Samantha Morrow. If you’re not in Buffalo for the world premiere, it will be captured for later broadcast.

You Are Here presented by Lincoln Center (July 14–31)
Here’s an excuse to check out designer Mimi Lien’s radical redressing of the Lincoln Center campus — and to wander through a dance installation. Conceived and choreographed by Andrea Miller, this mix of public sculpture, sound, and dance is an attempt to process the events of the past year. If nothing else, live performance is a step toward healing.

King Arthur presented by Bard SummerScape (July 25–August 1)
If you can drive to the Hudson River Valley, this is a lovely day trip for opera fans. Strapping baritone Norman Garrett plays the legendary English monarch in French composer Ernest Chausson’s luscious 1903 opera. Come with your own personal Guinevere or Lancelot — but not both! — for this rare revival.

The Barber of Seville presented by Teatro Nuovo (July 27–28)
Rossini’s bel canto rom-com about an overworked hairdresser, a rich guy in love, and a whole lot of disguises comes to Damrosch Park for two performances. Teatro Nuovo will use an orchestra of 35 players —the number employed at Barber’s 1816 premiere in Rome — for this alfresco concert that focuses on the essentials: gorgeous music and soaring voices. 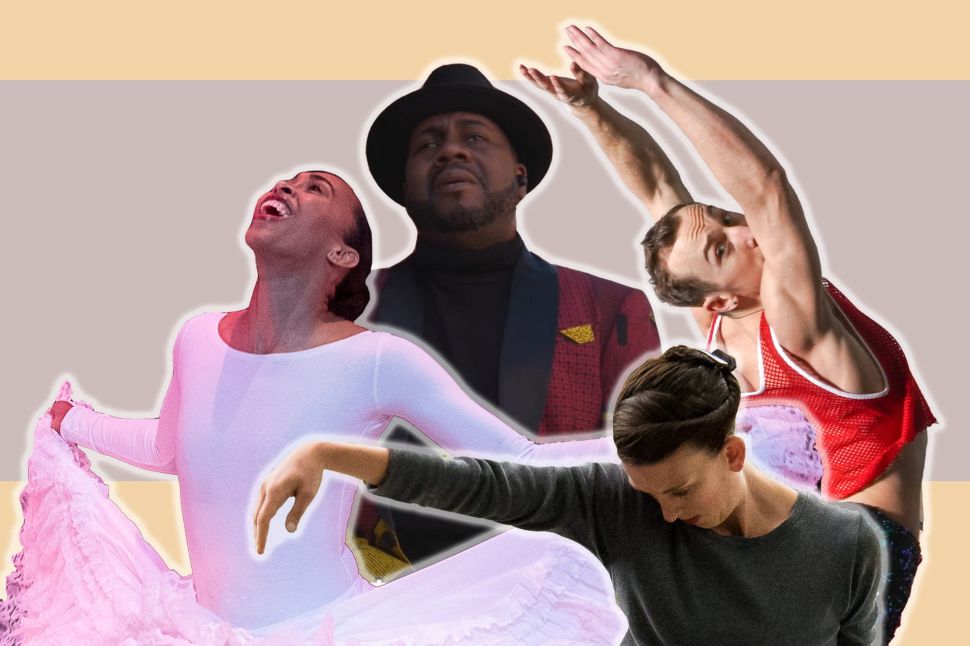