We pass them all the time. Some are woven into our daily lives, others are unexpected bright spots in a different part of town. They are the backdrop as we run errands, grab the subway, walk through a neighborhood. Public murals are part of the city’s fabric; landmarks around which our lives unfold. Over time, they fade and crack, succumb to the elements or new development or fresh coats of paint.

These public murals – dotted throughout all five boroughs — are unique in their scale and site-specificity, reflecting a community’s engagement not only with physical space but also their environment. World-famous artists like Keith Haring and Kobra have adorned city buildings with large-scale works, but most of the murals we see day-to-day are not tagged with names that would bring in seven figures at an auction house. Instead, these projects are realized by local organizations dedicated to creating art that uplifts and empowers. But these works don’t just crop up overnight; they are built through community cohesion and an investment of time and resources.

There are many organizations behind the works that color our urban landscape, and they all execute different objectives through their investment in public art. Hundreds of public murals can be credited to organizations such as Groundswell, the New York City Housing Authority (NYCHA), The National Audubon Society, the Department Of Transportation (DOT) and more. The means by which these works come to fruition varies by organization, but for each it is a labor of love.

The process begins, of course, with a site. For government organizations such as the DOT, potential project sites are selected in partnership with various civic organizations including the Borough Commissioner’s Offices and relevant internal DOT units. Locations are then reviewed based on specific criteria such as size, safety, accessibility and significance. Once a site is identified, it can take anywhere from six months to two years to implement a project. Artists are invited to submit proposals during an open call window, after which a shortlisted group is invited to an interview and, eventually, a list of finalists is decided. Since the founding of the DOT Art Program in 2008, over 350 temporary public works have been created through this system.

Zara Fina Stasi, an artist selected for a barrier beautification project during the DOT’s 2020 open call, was charged with painting a bike lane barrier of 3,000 square feet. With a team of volunteers, she worked over two weekends to complete Oranges from Durazzano, a mural inspired by her grandparents’ immigration from Durazzano, Italy to New York City. While she was selected based on a design she conceived of herself, it was the collaborative installation process that Stasi found particularly meaningful. “I don’t think people realize, if they don’t do art all the time, how powerful picking up a paintbrush can be,” Stasi said to Observer. “Not only for you personally because it’s such a cathartic experience, but also how quickly your work adds up with all these other folks… every little brushstroke builds and every person who came to volunteer was an artist involved in this experience.”

This idea of collective creation is at the root of Groundswell’s work as well. Dedicated to using art for social change, they have created nearly 600 murals throughout all five boroughs since 1996, with many works still in place today. “We have a great rate of long-standing murals,” Robyne Walker Murphy, Groundswell’s Executive Director, told Observer. “I think part of the reason why is because of the ways we include the community. They are invested because they had a voice in the creation.”

The key element of Groundswell’s efforts is promoting art within a neighborhood, not bringing art from outsiders in. This is done through special projects such as 2016’s Public Art/Public Housing collaboration with NYCHA as well as through the organization’s general operations. To achieve this, they unite local stakeholders, youth and artists to design and implement murals that not only brighten a space but address community issues. Groundswell hosts visioning sessions to discuss what community members want to highlight and what is important to them. Based on these discussions, a group of young volunteers creates a design and submits it for feedback. The community responds with revisions and, once a final design is approved by all stakeholders, a Groundswell artist grids out the wall for painting. Anyone who wants to can join on ‘paint day,’ and the young artists are credited for their part. “Groundswell tells the story of a city from the perspective of people that don’t always get a chance to share their narrative,” said Murphy. “We like to think of our young people and community members as storytellers and think of these murals as pieces of text that live throughout the five boroughs of our city.”

While Groundswell’s mission is rooted in social justice, other organizations seek to address different issues. The Audubon Mural Project began as a means of documenting species of birds threatened by climate change. In partnership with Gitler &_____ Gallery, the project commissions artists to paint bird portraits throughout the neighborhoods of upper Manhattan, where John James Audubon himself once lived and is buried. The project has completed 90 murals to-date, with plans to document all 314 threatened species over time, raising awareness and building community consciousness in the process.

Whatever the motivation behind these works, their presence throughout our city is more than a splash of paint on a building facade. The arts are big business, drawing millions of tourists to the city each year and generating roughly $120 billion in economic output statewide. However, the cultural sector is not just an economic boon. According to a study conducted by the Social Impact of the Arts Project, the presence of cultural assets in lower income neighborhoods was linked to better health, lower crime rates and higher academic achievement for local residents. Public art is an opportunity for bold statements, protest, celebration and motivation, but it is also an opportunity for growth. Community murals provide a window into the character of a place, shifting always as our city does, but reminding us that we are lucky to have treasures that aren’t just confined to gallery walls. 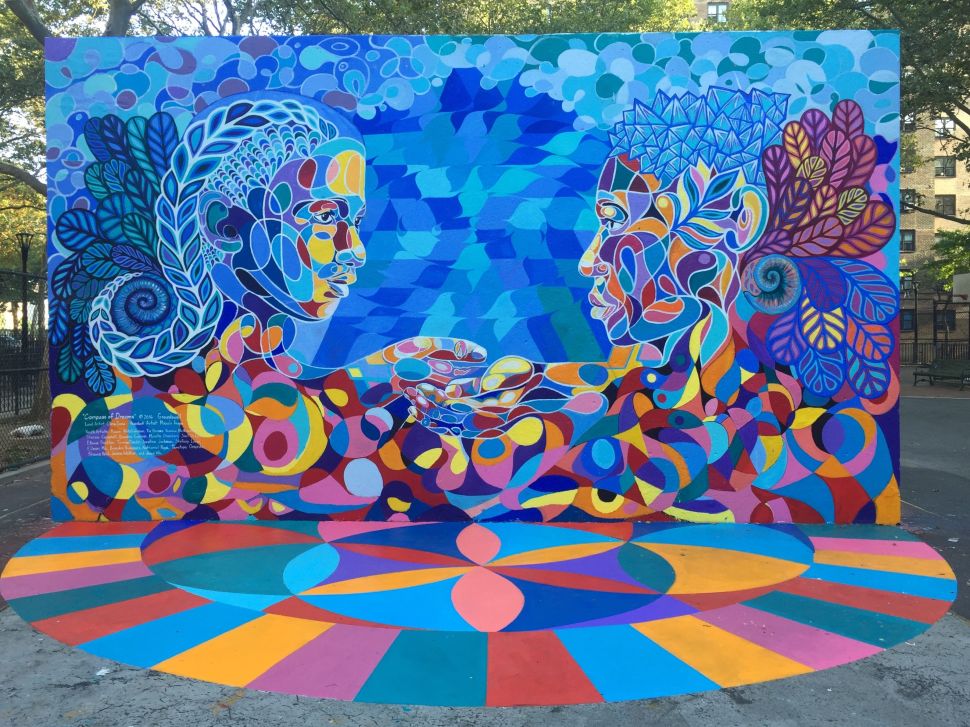