I feel kind of sorry for Ann Dowd at the Park Avenue Armory. The somber character actress that Hulu watchers know as Aunt Lydia, brutal patriarchal enforcer of The Handmaid’s Tale, stars in a solo distillation of Henrik Ibsen’s An Enemy of the People. Why pity her? There Dowd is, marooned on an elevated catwalk that spans the football-field acreage of the Armory, declaiming a rather novel-ish script as we sit far away wearing headphones. In essence, she’s shouting in dead space to a room of muffled ears. We hear her words, we see her image on large video screens, but her live presence is diluted through technology.

Granted, the corruption of truth due to human frailty is a keynote in writer-director Robert Icke’s didactic critique of democracy’s discontents. Among the many characters Dowd summons up, the catalyst is Joan Stockman, a scientist from a small town called Weston Springs. Famous for the healing properties of its natural hot- baths, the town is having an outbreak of odd symptoms among tourists and locals: mysterious rashes, hair loss, migraines. Joan has already deduced the cause in an unpublished paper: lead poisoning from corroded, century-old pipes. Those healthful waters are in fact hurting people.

Eager to tell the world (and get credit for stopping a health emergency), Joan demands that her older brother, Peter — the town mayor — let her go public. He, fearing economic chaos, urges delay. Decades of sibling rivalry between the brash, defensive Joan and the cautious, sensitive Peter infect what should be a disinterested civic response. Their animosity eventually turns a town meeting into a messy plebiscite on the arrogance of elitist experts versus pig-headed provincial ignorance. (Take that, Fauci!) It doesn’t help when the voice of reason and science (Joan) starts sneering that dum-dums ought to shut up and be sterilized.

Icke’s Enemy of the People retains the bones of Ibsen’s 1882 social drama, but otherwise it’s a gut renovation with choose-your-own-adventure alternative scenes. The original Dr. Stockmann was a man (not surprising), and his father-in-law ran a mill whose runoff was causing the chemical contamination of the town springs. Icke snaffles up this prestigious public domain (free IP!) and delivers a novelized update, full of “he said” and “she said” attributions, smartphones, and omniscient narration. Dowd recites this theatricalized audiobook stationed at various points on Hildegard Bechtler’s intersecting bridgeways, gazing at a map on a spin table, placing model houses now and then to set the scene. Audiences distanced around the vast Wade Thompson Drill Hall sit, cabaret-style, in pods where they vote on key plot points.

Yes, there’s voting. This audience-participation aspect of Icke’s production is a non-starter, to be honest. Should Joan’s report on lead levels go public or to the board? Is Peter the real enemy of the people? Hit the X or O button and be heard. Votes are tabulated and displayed on monitors, and Dowd has memorized alternative text, depending on which way the vote goes. I suspect that the director included this element to implicate the audience, but he doesn’t really make the moral stakes complicated enough to indict a room of rich, white, liberal New Yorkers. If anything, the Our Town via American Idol shtick leaches energy and tension from the story. We slide off our headphones, confer laughingly, and vote without much seriousness.

The 34-year-old Icke has been wowing London since his cool, punk-emo reboot of the Oresteia six years ago. Classic drama’s most prolific house-flipper, Icke has stripped down and glossed up the Greeks, Chekhov, Schiller, and Schnitzler with edgy, blunt language and modern-minimalist directorial vocab borrowed from Ivo van Hove and Thomas Ostermeier. It’s a clever formula, and his writing is punchy and assured. But Icke probably won’t make many converts with this archly dour bid at relevance. Dowd is a solid performer, but such dry, self-satisfied text needs a more mercurial talent. Likewise, a less enervating space, a warmer director, and rethinking the voting device would benefit the piece considerably.

It’s too bad, since the material is ridiculously timely for 2021: a public health disaster bungled by political cowardice. Enemy is Ibsen at his most evergreen, with greedy corporations preying on human fear and stupidity to hide their crimes. In Ibsen/Icke’s tussle between science and democracy, your mind flashes on the toxic cronyism behind the Flint crisis; America’s Covid self-slaughter; citizens who have to be bribed with a lottery to get vaccinated. Even the January 6 Capitol mob gets a nod when Mayor Pete becomes an accidental casualty of a bloodthirsty crowd. (My audience voted him the enemy of the people, so you could say we killed him.) But in the end, this glib polemic is satisfied to point fingers in all directions. The enemy of the people is misanthropic technocrats! No! It’s selfish, amoral politicians! No! The enemy of the people is…people?

Which brings us back to the simple, human joys of theater: being in the presence of living, breathing organisms creating whole worlds in air. You get a spoonful of that primal pleasure at this socially distanced remix of a classic, but so watered down as to leave you parched.

Correction: This originally stated that Icke was 32, he is actually 34 and it is corrected. 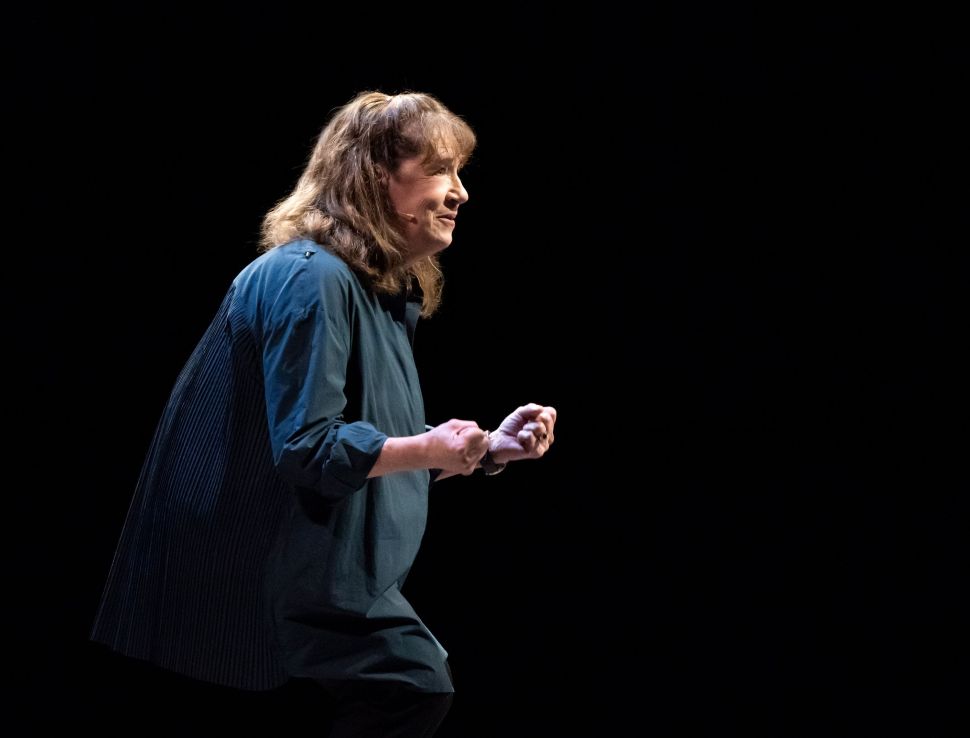