Catherine Foster knows how to tap in. As a 40-year-old dancer, she trusts herself and doesn’t question her choices.

She now understands the world more than she did at the start of her career over 20 years ago, and it translates into her work — artistic depth is embedded in her bones. She infuses choreography with her full physical and emotional essence. She is the more dynamic version of her younger self, and can quickly flip between subtlety and strength, always creating with intention.

Some critics have noticed. When Foster danced in Camille A. Brown and Dancers’ “ink” at the Joyce Theater in 2019, Siobhan Burke wrote in a New York Times review, “Catherine Foster revels in her own power.” Marina Harss of DanceTabs described Foster’s solo as “a gulp of pure air.”

In her own words, Foster said to Observer, “I am no longer in the space of people pleasing. I have agency now. I have discovered new territory within myself.”

But she also added this: “Unfortunately though, just based on how society is structured, people aren’t going to look at dancers like myself as someone in their prime.”

And therein lies the problem.

Dancers are typically expected to transition into a new career when they reach their early 30s. There is a general assumption that this is around the time the body must get tired, and we need to usher in a new generation.

According to data collected by the National Endowment for the Arts, the median age of a dancer is 26, while the median of all other artists is 41. Data USA, which uses numbers from the Census Bureau, doesn’t reference dancers over 35 at all.

The common narrative of  “dancers have a short lifespan” is unnecessarily perpetuated by the media. Just look at the New York Times’ two most recent features about dancers during the pandemic. Or this one from the New Yorker. That phrase is always plopped in, like a requirement for readers to understand the general idea of dance. But if those lines were removed, the articles would be just as effective.

Who are we to determine the appropriate length of someone else’s career? In what other field is that the case?

There are some incredible dancers still performing into their 60’s and beyond. Proof that culturally-motivated timelines and stereotypes are arbitrary. Particularly dancers in their 40s, who have whizzed past the expected “transition point” within their last decade, can serve as a bridge between what is predicted and what is possible.

Despite a body’s natural, inescapable tendency to change over time, many dancers have grown more knowledgeable about their physical instrument as the years go by, and along with that comes refinement — a beautiful quality to experience.

At 43, Peter Chu, a former member of the company Kidd Pivot and now a performer and creator with his own company chuthis, told Observer he feels like “the lightbulb has finally clicked on.”

“There is something about age, the body’s intelligence when you’re over 40… a heightened sensitivity and awareness is completely there. And when you approach things differently, there’s a quality that exudes the body, that comes out of the skin, and you can sense that in the space. It’s something that can’t be taught,” he says.

Juel D. Lane, 41, also dances with Camille A. Brown, and his dance film Touch & Agree has recently been dominating the festival circuit. Over time, he’s learned to channel his energy more efficiently, allowing for clearer meaning in his movement. He told Observer, “It’s like I’m micromanaging my energy levels when I perform, rather than when I was younger, it was just about hitting the step. Now it’s still about hitting the step, but also about discovering, and unwrapping, and breaking down what something means on my body and how I can make it work for myself.”

Currently a dancer in Moulin Rouge! on Broadway, Bahiyah Hibah, 46, has reevaluated her focus. When she was younger, it was on what company she was in, what would garner recognition. But now, it’s shifted. “The focus is just on me as an artist. That’s what allows me to continue to grow and evolve,” she confided to Observer, “I think of how the music can inform me, and how I can inform the music. I’m not just a fixture making shapes and trying to match the person next to me anymore.”

And emerging artists are hungry to apply these lessons to their own practice. Stephanie Troyak is a younger dancer who joined Pina Bausch’s Tanztheater Wuppertal a few years ago when she was just 21. The German company is known for its use of dancers of all ages, many in their late 50’s and upwards.

“What I have learned from people like Nazareth Panadero, Jo Ann Endicott, Julie Shanahan, Daphnis Kokkinos… They’re bringing the weight of years of life experience, and it all sinks in so deeply. They’re not having to do all the bells and whistles. It’s simplicity mixed with clear choices,” she wrote to Observer. “I think often younger dancers learn things fast, which is a great skill, but many details are lost along the way. Viscera is often celebrated, but without life experience, groundedness, and attention to detail, it can become just cool moves and explosive energy.”

And the benefits of maturity aren’t just physical. They’re energetic and psychological, both communal and internal all at once.

Jermaine R. Rembert, 49, is a performer in Chicago on Broadway. Throughout the years, he’s gained clarity on the importance of teamwork in a creative space. He told Observer, “It’s no longer just my thoughts, my moments, my show. This is our show, our moments, our connection.”

Chu has also adjusted his way of thinking and communicating. He’s comfortable stating his demands in a respectful, compassionate way, and he’s not afraid of supporting silently. “I know how to listen, how to pick up on cues. I also realize when it’s important to stand there and just observe and sometimes not offer energy at all. When are you leading? When are you following, when are you standing still? I can sense the space and try to offer what I think is needed,” he says.

Especially in musical theater, the industry could help crush ageism in dance by also using seasoned dancers to the advantage of a production. Identify their distinctive qualities, articulate them, and highlight them instead of hiding them in the back corner. See the possibilities sophisticated artists present.

As Rembert says, “The misconception most people have is that the older the dancer, the less skill. But it’s not that they can’t do it, you just need to tap into their unique skill sets and start making more work for them.”

Outside the creative room, it comes back to the problem of language. When we stop using terms and marketing that put dancers in an age box, the pool of accessible talent will expand tenfold.

Patch Schwadron is the senior career counselor in The Actors Fund’s Career Transition for Dancers program. She works with dancers tackling some sort of change in their lives — from injuries, to parenthood, to new career goals — and ageism is a common theme.

She told Observer, “The perception from the outside world is that dance is an athletic pursuit, and like football, basketball and all other athletic pursuits, you can only be a professional up to a certain point. After that you become a broadcaster or a teacher, right?”

It goes back to societal narrow mindedness. “What people are bumping up against is still this Eurocentric notion of what a physical dancer is and should be,” says Schwadron. “This all needs to be a larger, intergenerational conversation.”

In order to erase the conventional way of thinking, Lane acknowledges it also needs to be a personal mission. “I need to stop saying I’m old, because I’m not. I think I’m just conscious of what I am ‘allowed to do’. Language is powerful. I know I’m getting older, but I don’t want to limit myself and say that as a crutch. We can take on experiences that challenge us at any particular age,” he says.

Silvia Vrskova, 44, has been a longtime performer with Cirque Du Soleil, and she agrees. “I’m so aware of the words, the vocabulary we’re using,” she said to Observer. “We need to not judge each other, but learn from each other instead.”

After 15 months away from the stage, many people are wondering how these dancers have managed during the shutdown. The public conversations tend to be hung up on whether or not their bodies will return to their pre-pandemic physicality. But with a deeper sense of self and an increased awareness of the world already developed, most mature dancers have surpassed these anxieties and can view the situation with a level head.

When a dancer realizes they will be better artists on the stage when they are more well-rounded humans off of it, work can be approached with appreciation, and the clock in the background stops ticking so loudly.

Although it was a jarring shift at first, Hibah has enjoyed the opportunity to focus on her home life. “When Broadway shut down, even though I fully identified with that part of who I was, there was a whole other, very important, part of my existence that I had not given as much attention to,” she says. “And both sides lend to each other.”

Lane has used this past year to turn inwards, work on his craft, and revamp his goals. “We’re so much on-the-go, but having this year to just sit still, to figure out what your next steps are, was very eye-opening. It was almost like a watering for something new to blossom.”

For Catherine Foster, the pandemic wasn’t an excuse for a looming retirement either; it was an opportunity for expansion in new ways. She has already come so far, yet she has only just begun.

She’s thankful for her mentors who have helped her see value in herself at every stage. But more importantly, she realizes this topic is bigger than herself.

“We have to be seen. Younger dancers need to see artists dancing into their forties and fifties. Then they can be smarter and strategic about how they approach the career so they will have longevity,” she says. “Just keep moving. Don’t put a time limit on everything.” 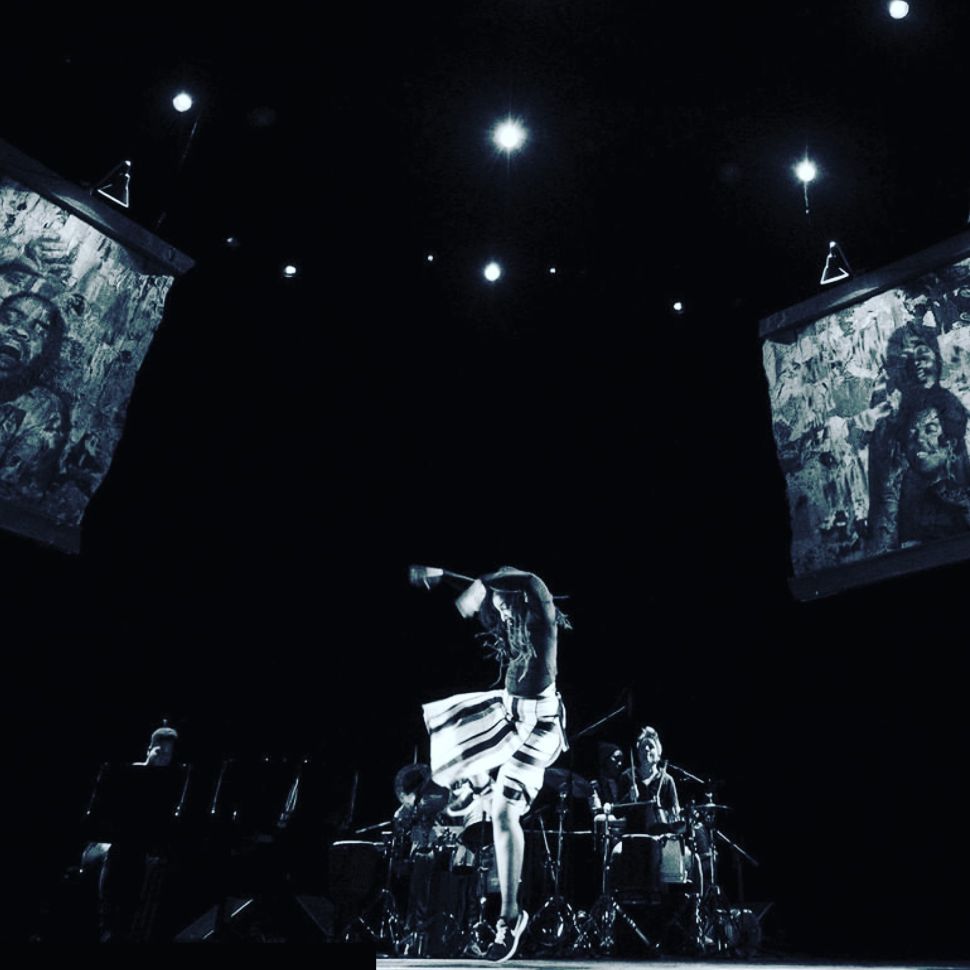