His portrait may be on the back wall of the gallery, but the heat of blues legend John Lee Hooker’s stare in Alex Harsley’s portrait of John Lee Hooker (1980) is enough to make a viewer think they did something to piss him off. Everything about the composition makes Hooker seem poised for a fight: the downward angle of both his gaze and hat, how he sits at a slight diagonal, his fist raised over his guitar. That fist’s intensity may be slightly dulled by motion blur, but I still hoped the photographer wasn’t on the receiving end of it.

Fortunately for visitors to “Alex Harsley: The First Light From Darkness,” on view at Pioneer Works in Red Hook through August 22, both Harsley and his ability to capture that intensity and create a visceral reaction for viewers, remain not only unharmed, but thriving. He’s as talented at celebrity portraits as he is at streetscapes and nature, and moves seamlessly between the composed and the spontaneous.

Harsley began his career as a photographer for the Manhattan District Attorney’s office in the 1950s, until he eventually became a street photographer. In 1971 he started an organization called Minority Photographers that offers training and mentorship to photographers from a number of communities, housed in his gallery, the Fourth Street Photo Gallery. The gallery, organization, and Harsley himself, are still on East 4th Street, against all the fickle odds of East Village gentrification. He’s collaborated with or mentored artists like Robert Frank, David Hammons, Dawoud Bey, and Cynthia MacAdams, but hasn’t reached their fame.

The exhibit, curated by Vivian Chui and Harsley’s daughter, Kendra Krueger, and spread over two of Pioneer Work’s spaces, is an important step in introducing Harsley’s work to a wider audience.

The exhibit is divided into two sections. In a rectangular second floor gallery, arranged on all four walls with a case of Minority Photographers memorabilia in between, is a tightly edited collection of fifty years of work that deftly captures the breadth and depth of Harsley’s practice, including street photography, celebrity portraits, landscapes, and cityscapes. On the third floor is a long form video work, The First Light (2000-2020).

Harsley was inspired by Henri Cartier-Bresson’s concept of the “decisive moment,” a  spontaneous event or moment, where the image captures the essence of the event itself. In Harsley’s street photography, that moment is often the person or the object that’s going just slightly against the grain of everyone or everything around it.

In Harlem Father’s Day Bike Race (c.1970s), spectators line up to watch the titular race. Almost every person is looking with anticipation in the same direction, except for one woman, standing just in front of everyone else, and a little to the right, face and eyes sideways, reflecting wariness, and skepticism in just a small change of angle in her head and eyes. In Rhythm on the Court (1959), it’s the man on the handball court, one foot kicking in the air, the other planted, urgent where the other subjects are still.

Sometimes that decisive moment doesn’t involve a person. For Death of the Messenger (1970), it’s the small boat at the edge of a frozen creek, adding a small suggestion of humanity across a frozen space. The boat looks like it’s run aground and perhaps been abandoned. This work is also an example of Harsley’s ability to conjure textures in black and white, and multiple hues in grayscale. The creek is almost all frozen, and lit just enough to show the variations in topography: where it’s a solid block of ice, where the tree branches are thin and prickly, the boat black on the outside, and filled with snow that’s a brighter shade of white than that on the creek’s edges.

Harsley also has a knack for capturing a subject’s personality even when their eyes are closed, as in Coltrane at the Apollo, (1964) which depicts Coltrane, eyes scrunched in a combination of concentration and ecstasy. Without the focus on the eyes, we notice the tension in his fingers, the concentration in his forehead, the way his sax looks like it might take flight. The same is true of Family, (1980) which shows two children, one seen only from the bottom of their body, holding another girl, eyes shut, lips pursed, as if on the edge of tears.

Where the second floor exhibit is tightly edited, the video work on the third floor is sprawling and loose. The First Light (2000-2020) is a 90 minute experimental film completed over twenty years, layering, dissolving, and collaging images. These images include outer space, a dance performance, New York City streetscapes, martial arts competitions,  the Statue of Liberty, waterfalls, and bridges.

The design is at times reminiscent of a Geocities webpage, with lots of animated flames rendered in red, black, and blue. Almost every scene becomes a kaleidoscope, and then folds in on itself, birthing a new, colorful, flashing image.

Just when you think the film has settled on a location or scene, a river will expand and then shape shift into fire, out of which there’s what looks like two tiny humans grow larger and larger together, perhaps referencing Adam and Eve.

It’s exciting, frenetic, and a little dizzying after twenty or so in a row. My brain craved a narrative anchor, a repeating motif or guidepost to tell my eyes and mind where to go. For the video to be shown in a room big enough to contain it, or broken up into a series, with pauses to reflect and absorb. Still, it made me eager to see more of Harsley’s work, video and photography alike.

In 2012 Holland Cotter wrote, in a New York Times review of another Harsley show, referring to the video work, “It would be good to see some of that work, in addition to photography, in an institutional career survey. And surely the time has come to put a history of that career between the covers of a book.” Nine years later, and especially on the occasion of the 50th anniversary of Minority Photographers, Harsley is even more ripe for a career retrospective. Hopefully this show at Pioneer Works will encourage another large gallery or museum to commission one, and hopefully a lot sooner than another 50 years. 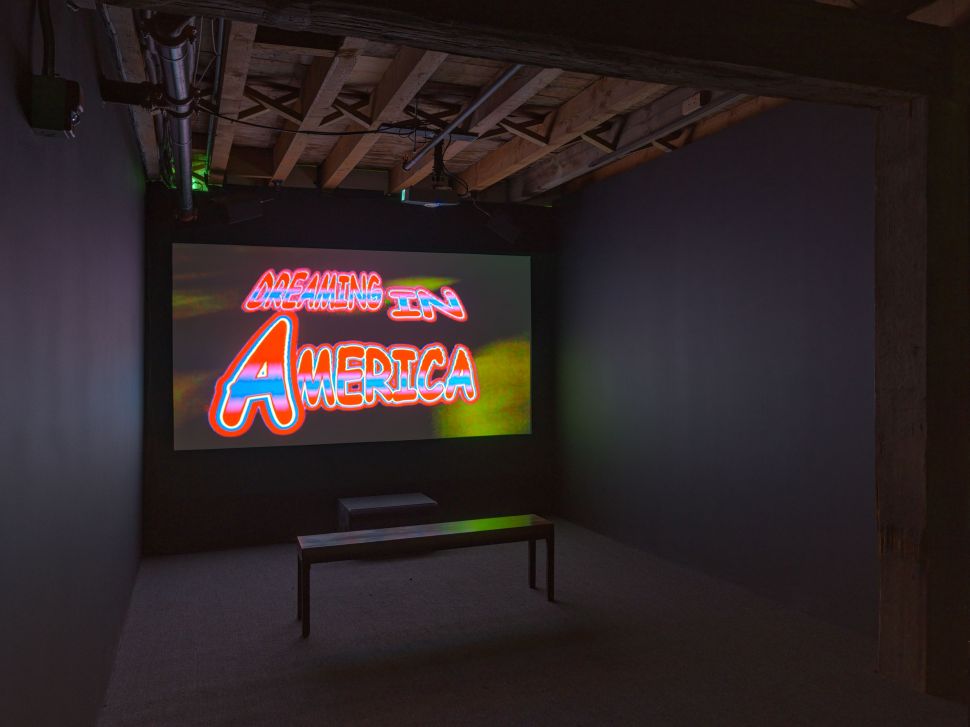