James Cameron’s Aliens, which is 35 years old this week, is a movie about a tragic last stand against colonialism and genocide.

Admittedly, that’s not how most viewers or critics have seen the film. It’s usually thought of as a big, fun Hollywood action blow-out, with creepy horror elements and a compulsively quotable script. (“Game over, man! Game over!”)

But look at it from the perspective of the ugly, two-mouthed, acid-blooded aliens. They’re supposed to be the disgusting, feral, monstrous overwhelming foe. The movie is exhilarating because our heroes defeat the undefeatable. But if you’re an alien, that just means you’re defeated—and your entire people, down to the children, wiped out by fire.

Aliens starts with Ripley (Sigourney Weaver) being rescued from suspended animation more than 50 years after Alien (1979). In the first movie, a small corporate exploratory craft investigates a signal on planet LV-426. They find an alien spaceship with a cache of alien eggs. In the spirit of rapacious colonizers past, they try to salvage one of the aliens for biological experimentation, but the infant bravely fights back, killing all of the crew except Ripley.

If you’re an alien, that just means you’re defeated—and your entire people, down to the children, wiped out by fire.

Once informed of the alien’s existence, the Company is determined to harvest them. Since Ripley was last awake, a human colony has been established on LV-426 to terraform the planet. The colonists are sent to the alien ship, at which point the Company loses touch with them.

A military invasion is planned. Ripley agrees to serve as an advisor, but only on one condition: “You’re going out there to destroy them. Not harvest them. Not bring them back.” That’s the central conflict of the movie; whether humans will enslave and exploit the aliens, or whether they will exterminate them.

The tough, heavily armed marines are equipped with machine guns, flamethrowers, grenade launchers, an armored transport and air support. The aliens, now ensconced in the former human colony, are massively over-matched. But through superior knowledge of the terrain and sheer determination, they manage to hold their own. They set up their main camp in a part of the complex where gunfire may set off a nuclear explosion. When the humans barricade themselves behind welded doors, the aliens climb through service panels to attack them from the ceiling. And the aliens repeatedly sacrifice themselves to damage the invaders, spraying their acid blood on their attackers in a final, gallant act of defiance.

The fierce resistance grows more desperate as the humans decide to nuke the entire planet from space, killing all living things because, “It’s the only way to be sure.” But ultimately the fight is futile. Ripley finds the nursery, where the alien infants sleep in their eggs, and destroys them all. Then the facility explodes.

“You’re going out there to destroy them. Not harvest them. Not bring them back.”

The alien mother manages to climb aboard the escaping human spacecraft, and, enraged at the wanton murder of her children, tries to take revenge. But even that is denied her. Ripley shoots her out the airlock into space. The entire alien encampment is wiped out, just as American soldiers wiped out the Vietnam village of My Lai in 1968.

James Cameron, in fact, has said that Aliens was inspired by the Vietnam War—or by the American War, as the Vietnamese call it. Human “training and technology are inappropriate for the specifics, and that can be seen as analogous to the inability of the superior American firepower to conquer the unseen enemy in Vietnam,” Cameron said in one interview. “A lot of firepower and very little wisdom, and it didn’t work.”

Of course, Cameron made some important alterations to his Vietnam analogy. In the first place, the Vietnamese are human beings. They are not nightmarish fanged monstrosities who impregnate Americans with progeny which, when grown, claw out through the chest cavity.

The Vietnamese also weren’t animals, nor were they limited to bows and arrows as Francis Ford Coppola would have it in Apocalypse Now. Vietnamese forces had sophisticated anti-aircraft guns, among other resources; the Americans had superior weaponry but not that superior. And, even more tellingly, the United States lost the war, whereas Ripley and her companions win.

That’s the real tragedy of Aliens, perhaps. Yes, humans exterminate aliens, rather than the other way around, but that’s fiction. No real aliens were harmed during the creation of this film. But the American War really happened, and real people died in it.

Usually, we think that the winners get to write history. But America’s technological advantage, overstated in military matters, is unmatchable in cultural ones. “All wars are fought twice,” Vietnamese-American novelist Viet Thanh Nguyen writes, “the first time on the battlefield, the second time in memory.” The United States couldn’t conquer Vietnam. But it could conquer the memory of Vietnam and create movies in which the war was not an embarrassing and bungled exercise in imperial overreach, but a victorious struggle against inhuman adversaries.

No doubt some humans will read the alien account of Aliens and have some objections. The human colonists on LV-426 didn’t know the Company wanted to exploit alien biological material. The aliens wiped them out unprovoked—and then used human biological materials for their own twisted purposes. And how can you blame the humans for wanting to kill each and every alien? This is a species which does nothing but attack, kill, and plant its eggs in doomed human hosts. Negotiation doesn’t really seem like an option.

But how much of that is true, and how much is propaganda? The Company has all the cameras; if there are alien filmmakers, their work doesn’t get much mainstream distribution. Three and a half decades later, Aliens still feels relevant and up-to-date. That’s in part because it’s well-written and imaginatively visualized. But it’s in part because Hollywood still isn’t very interested in letting us see through xenomorph eyes.

Correction: An earlier version of this piece included the incorrect anniversary for Aliens. We regret the error. 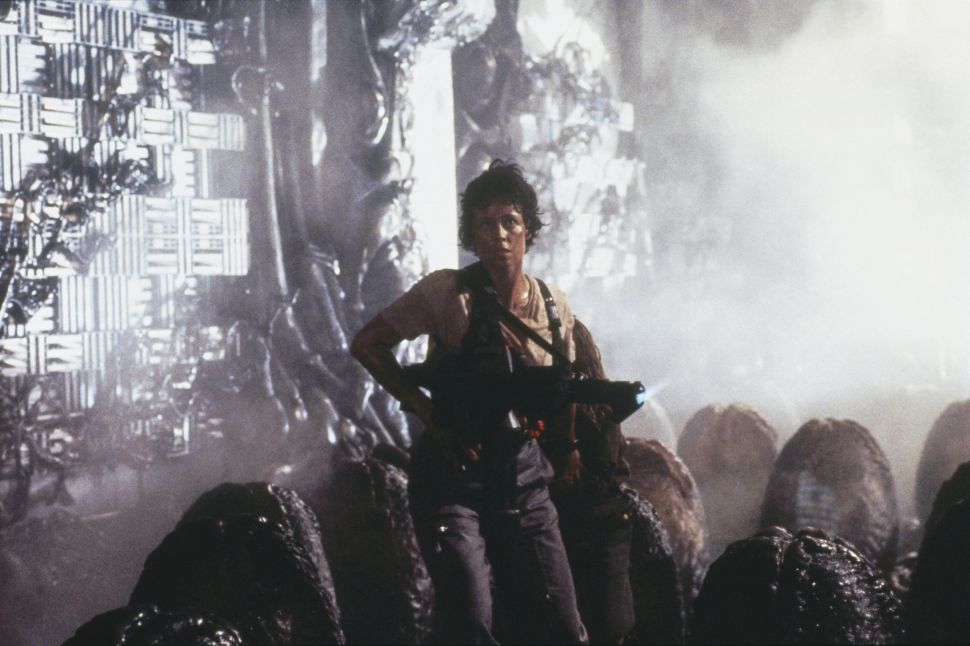