“It’s a tough story,” director Morgan Neville admits of his new documentary, Roadrunner, who traces the life and career of Anthony Bourdain. “It strikes people differently, but it’s definitely heavy. There’s no way around it.”

Neville began working on the documentary, subtitled “A Film About Anthony Bourdain” and in theaters July 16, after Bourdain’s death by suicide in mid-2018, originally unsure what direction the story would take. He was given access to hundreds of hours of unused and behind-the-scenes footage from Bourdain’s popular TV shows, including CNN’s Parts Unknown. The filmmaker also interviewed numerous people from the late chef’s life, from Éric Ripert to his ex-wife Ottavia Busia to producers and directors he worked with. The film, which traces Bourdain’s rise to fame following the release of his 2000 memoir Kitchen Confidential to his tragic death, isn’t afraid to examine its subject’s flaws or missteps, including his final, doomed relationship with Asia Argento.

Just saying to people “Hey, I’m making a film about Anthony Bourdain,” the reaction I’d often get was a heavy sigh.

Ultimately, Neville, who previously made the acclaimed documentaries 20 Feet From Stardom and Won’t You Be My Neighbor?, wanted to examine a man whose life changed so dramatically mid-way through his life. Here, the filmmaker speaks to Observer about how he came to that story, what the film reveals about Bourdain and why the beloved TV host may not have been the guy he seemed on camera.

Observer: When you started making this documentary, did you have a vision for what shape you wanted it to take?

Morgan Neville: No. I mean, at the very beginning, I just had what got me excited about the film. Which was that Tony was someone who was always an interesting character to me. He’s somebody who felt like a fellow traveler. He felt like one of the good guys. Somebody who was just using his platform to show more of the world to people than anybody else. He was such an humanist, but also so fucking funny — and dark. He was a complicated, interesting person, so initially I was like, “Oh, that would be really interesting.”

Had you ever met him?

We had mutual friends, but I never met him. I knew about what he meant to whole the alternative food media scene and all the people he supported. That was all the stuff that got me excited in the beginning and then right as I was starting the film I was like, “Oh, this is also a film about suicide.” The suicide was the thing I was kind of in denial about, at the beginning. And then it was just trying to figure out what that story was and how to handle it and how to balance it with the rest of his life. As I would talk to people, both in the film and also just saying to people “Hey, I’m making a film about Anthony Bourdain,” the reaction I’d often get was a heavy sigh. People feeling like it’s so tragic. There was a heaviness around how people thought about him and I started to realize the film could help people get beyond that. Or, at least, to process that in some way.

How long did you spent going through footage and doing all the interviews for the film?

The whole thing was about 20 months. And we were going through footage almost the entire time. There was so much stuff to go through — I mean, it was kind of a bottomless pit of footage. And we had two editors, two assistant editors, two producers and me all looking at stuff, all the time, trying to find stuff. Somebody would say, “Hey, look what I just found in the raw footage of Bhutan!” Or whatever episode it was. It was a lot of looking for needles in haystacks. But also every time I talked to people who knew him or worked with him I would ask them about scenes or trips that stood out to them. And there was a lot of that, a lot of people pointing me to [things]. “Look at this trip, Tony went through a lot on this trip” or “You should really look through this.”

He was such an humanist, but also so fucking funny—and dark.

So there was reacting to the mountain of footage, but also figuring out what the story was I wanted to tell. There were so many ways you could tell this story. And it’s such a good story — you could do a miniseries about him. I decided, early on, that to me the story is what happens when his life changes. It’s the explosion of Kitchen Confidential and how that changes his life. To have a character whose life changes in their 40s, in an unimaginable way, which is very uncommon, to have that life-changing success that late in life, is interesting. And then it becomes a question of how exciting that is, but ultimately how non-transformative it was.

No matter much your life may change, does getting everything you ever wanted ultimately give you happiness? Spoiler alert: No, it doesn’t.

It’s interesting to see so much footage of him behind-the-scenes. We were all so inspired by him, but this documentary feels like a reminder of the idea “Heavy is the head that wears the crown.”

It was a weight [for him], but, at the same time, he was not going to relinquish the crown. I talked [in the film] about his feeling of agoraphobia and that feeling that he became a public figure that everybody had a relationship with. It’s not like being a movie star. Everybody felt they knew him and could talk to him and could buy him a beer or approach him. And he had utter imposer syndrome, always, where he always felt like it could just all go away. Part of that is that if people came up to him he would always engage and talk to people and be friendly, and if you’re as famous as he was that becomes a weight on a person. But I think he felt like “I spent 25 years standing on my feet in front of a deep fryer all day. I need to be grateful for this.” So I think he rarely let himself relax.

The more I got into it, the more I understood that underneath it he was really that shy nerd guy who people knew him way back when would say he was.

When you’re dealing with a figure who is this beloved and where everyone does feel like they knew him, how much pressure was there to get this film right?

It was like with Mr. Rogers [in Won’t You Be My Neighbor?]. Everybody felt very protective and everybody had this idea of him. But I think at the end of the day I wasn’t making this film for the public. And I did very little fan service. I don’t like fan service, meaning “Remember that episode?” or “Remember that time he did that thing?” It’s not a highlights reel. It was really me trying to tell a narrative story about the journey of this man and what he went through and embracing his complications.

In my mind, certainly in the beginning, I was thinking of the audience being Tony. Part of that was really getting into his music he loved and the movies he loved and the books he loved, and trying to infuse all that DNA into the film so that if he saw he would constantly be surprised by how close it felt to him. There are all kinds of Easter eggs in there I think only he would get.

You’ve made several films about rock stars. Did you see any correlations here?

One hundred percent. That leather jacket Tony. He had that kind of attitude. And, of course, he loved people like Keith Richards and Iggy Pop — and I made documentaries about Keith Richards and Iggy Pop. But there’s a significant difference here. There was a New Yorker profile about [Bourdain] years ago that I read, when doing research, that said “He’s Apollo dressed in drag as Dionysius.” That’s both a little pretentious and a little true. And the more I got into it, the more I started to see that.

For somebody like Keith Richards or Iggy Pop, they’ve survived because they don’t care about anything, in a way that is enlightened. They don’t care what people say about them. They don’t care how they come off. They care about the people in their lives and, as Iggy says in the people, the people who love him. They are family people. But they have a relaxed way of being in the world. It’s carefree, which is enviable. And Tony was the opposite. He cared about everything. Every tweet. Every review. Every episode. As much as he tried to walk the walk, constitutionally he was not a Dionysian figure.

In making this film, did you learn anything about Anthony Bourdain that really surprised you?

The sense of his shyness surprised me. He seemed so gregarious. But the more I got into it, the more I understood that underneath it he was really that shy nerd guy who people knew him way back when would say he was. So smart, so curious and could talk about everything, because he read books about them, but he’d never been anywhere. [Before Kitchen Confidential] he wasn’t worldly, except in his taste. What’s interesting is to see somebody like that actually, then, be given the world. And to see what they do with it.

Roadrunner: A Film About Anthony Bourdain premieres in theaters July 16, 2021. 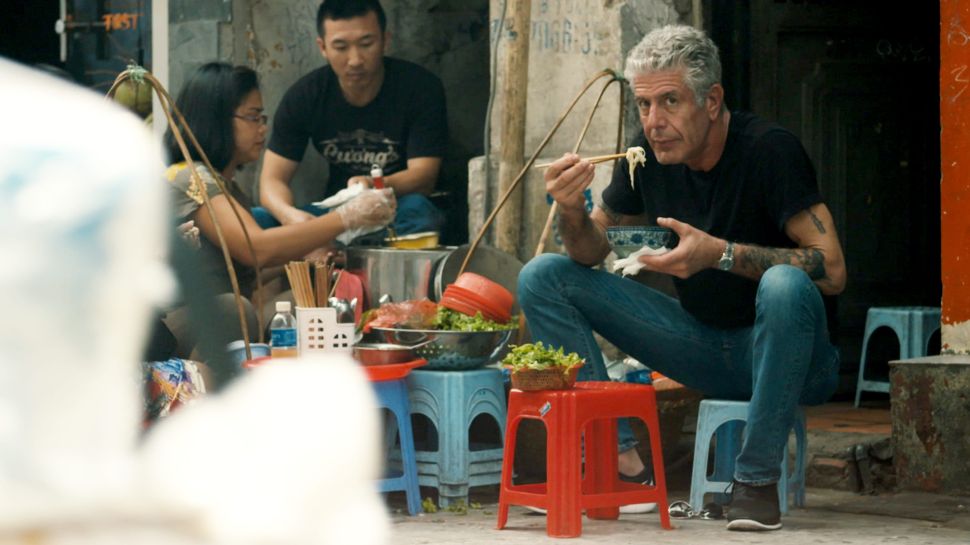