On Monday, Apple said a whole lot about Ted Lasso‘s Season 2 debut without saying much of anything. In typical streaming industry fashion, the tech giant announced a litany of impressive-sounding tidbits to prop up the arrival of the highly-hyped second season without providing any real hard data to back it up.

According to Apple, more Apple TV+ accounts streaming the Season 2 premiere on Friday, July 23, and over its opening weekend, than any previous launch, per Variety. The company said the Season 2 premiere increased its viewership by 6x over Season 1 and that over the premiere weekend, Apple TV+ expanded its number of new viewers by a record-breaking 50% week-over-week. But a 50% increase over zero is still zero. Without any firm understanding of the show’s actual audience size, these are merely vague platitudes meant to elicit “oohs” and “aahs.”

So how popular is Ted Lasso really? According to Parrot Analytics, a data company that sifts through social media, fan ratings and piracy data to represent audience demand, which reflects the desire and engagement expressed for a title within a market, Ted Lasso is a surefire hit both in America and worldwide.

The show is largely credited with Apple TV+’s growing demand share growth in the U.S. and worldwide over the last year, even as the streaming service continues to roll out impressive originals such as For All Mankind and Schmigadoon!. With Ted Lasso‘s weekly release schedule, a strategy that has proven to build audience demand over time, Parrot Analytics expects to see the numbers grow further in the coming weeks.

Season 1 became a word-of-mouth phenomenon last summer at the height of the pandemic. Season 2 has leveraged that goodwill to deliver not only another heartwarming season of television, but a more buzzed about season as well.

Season 2 debuted to 38.7x the demand of the average show in the U.S., a full 20 times more demand than the series’ Season 1 debut (1.9x). Season 1 of Ted Lasso — released on a weekly schedule — steadily grew in demand during its first season, as audiences sought a positive refuge in the face of lockdown life and daily COVID news, topping out at 30.0x average demand the day after its season one finale. It was a slow burn build that was aided by home confinement and a cultural need for a morale booster. Season 2’s debut demand was 29% higher than the peak demand during Season 1 with American audiences, indicating new audiences kept discovering the show between seasons. Everyone seemed to have at least one friend raving about the show and pushing it to their social circles.

Globally, Ted Lasso is performing even better, though we likely won’t get any firm confirmation from Apple TV+ any time soon.

Season 2 debuted to 41.4x demand of average show worldwide, while season one debuted to just .5x the demand of the average show globally. Even folksy midwestern characters can resonate with overseas audiences if the heart and humor is present. That’s something co-creator Bill Lawrence (Scrubs, Cougar Town) knows a thing or two about.

Global audience demand during Season 1 of Ted Lasso peaked at 32.9x. Global demand for Ted Lasso’s Season 2 debut was already 25.8% higher than its peak demand during its rookie run, showing new global audiences also discovered the show in between seasons.

Parrot Analytics also tracks demand share for digital originals across the streaming spectrum, which is often a quality indicator of subscriber growth. The demand share for Apple TV+’s digital originals has grown significantly, both domestically and globally, since Ted Lasso debuted in August 2020. This sets the company up well for Q3, particularly as incumbent market-leader Netflix sees its growth slow in the first half of 2021.

In Q2 2021, Apple TV+ had 5.4% of the global demand share for all digital originals. This was fifth best of the major streamers, just behind Hulu (5.6%) and ahead of HBO Max (4.8%). This represented a 54.3% improvement over Q3 2020, when Ted Lasso debuted, and when Apple TV+ was at 3.5% global demand share. Of course, Apple TV+ has been steadily adding to its library of original films and series in that time. But Ted Lasso has quickly emerged as its flagship series, with expanded episode orders for a second and third season.

Whether or not Apple is interested in buying one of the main studios or production companies available to further pad its library and programming infrastructure remains to be seen. But for now, despite the company’s lack of transparency, Apple TV+ can rest easy knowing Ted Lasso Season 2 is off to an impressive start. 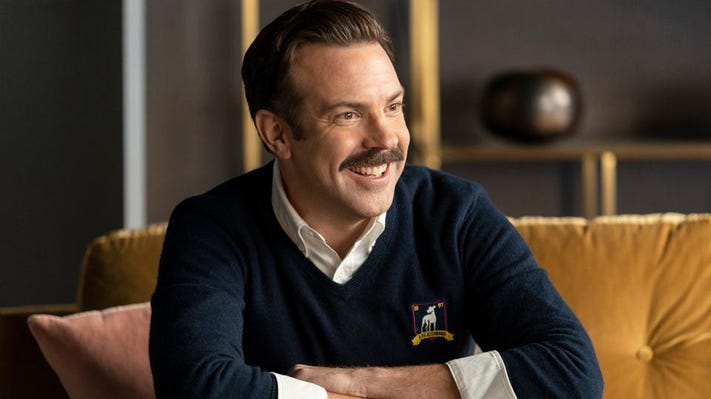