On a summer day in 2016, Cuban artist Harold García V was walking home on South Beach when he noticed a great white heron eating French fries. To him, the bird seemed foreign in an otherwise urban environment. After investigating the bird’s history, he learned the bird that was now scavenging for scraps in the midst of nightclubs and fluorescent lights was once a prized target of Victorian era plume hunters. With no laws to protect the birds in the late 19th and early 20th centuries, plume hunters descended upon the Everglades and killed the native herons to make luxury hats with their feathers, rendering them nearly extinct.

“The feathers were in high demand, so the Everglades were the main supplier,” García explains to Observer, “it was a nightmare for these birds.”

García explores the issues of colonization and the commercialization of the Everglades, advocating for conservation, in his exhibit “Welcome to the Everglades” curated by Grethell Rasúa at Thomas Nickles Project in New York City on view through July 11. The show, which features 11 color paintings of indigenous and non-native women dressed in Victorian garb, a short video, and additional multimedia pieces, juxtaposes the millinery industry’s abuse of herons from nearly 100 years ago, to the ongoing rerouting controls of through levees and canals in the interest of development and luxury real estate.

“It’s the same corporate interests making a profit, all in the name of man’s greed,” García said to Observer. “Integrity right now in the Everglades is completely compromised.”

García, who was born and raised in Cuba and immigrated to Miami when he was 19 in 2005, had never even thought to venture into the wetlands until the encounter with the heron made him realize everything related back to the Everglades, and this one central “swamp” was actually a crucial source of and livelihood for his community.

“The first thing we need to make it possible to get the Everglades in a better state of health is letting people know the Everglades exist and we’re part of it and we depend on it,” he said to Observer.

García’s show skillfully weaves together viral imagery with concise historical and ecological context, and was accompanied by the United Nations Documentation and Division Lecture Series. Guests can scan a QR code to learn more about each piece.

“One piece is linked to another one and by making those links you start to understand the significant negative factors that are affecting the Everglades,” García said to Observer.

On a late afternoon in June, during an ominously dry start to Florida’s usual wet season, the rain finally trickled along Tamiami Trail. The first state road to cut across the Everglades’ slow-moving “River of Grass” runs south from Central Florida’s Lake Okeechobee to a Limestone Basin in the Florida Bay, acting as a dam, blocking the natural north-to-south flow of . Built in the 1920s, the road’s interruption of nature’s intrinsic cycle depleted food sources for native wildlife, forced the indigenous Miccosukee Tribe to leave the wild, and caused vast ecological harm. But, on this late afternoon in June, after 100 years since its construction, and with 50% of the original Everglades already lost to urbanization and development, a confluence of man-made canals and recently built control structures run adjacent to the historic road, intentionally attempting to restore the historic flow of .  After years of advocating for this, Miccosukee leader, activist and artist, Reverend Houston Cypress, is claiming this a step in the right direction.

In their recent short film, “…what endures…” commissioned by the Institute for Contemporary Art in Miami, Cypress juxtaposes the man-made canals with natural marsh, highlighting the ephemerality of man and their creations, asking the central question: what really endures?

The staggering concrete S-333N control structure that looms over the vast Everglades swamp, was built in under two years, and doubles the amount of that can be moved south through the area of the Central Everglades and into the National Park, while decreasing harmful estuary discharges. Though a highly technical project, the intrinsic goal for Cypress and their colleagues in restoration work is simply to support the Glades’ natural cycles.

Cypress, who co-founded an arts collective called Love the Everglades, and is part of the Miccosukee Tribe’s environmental advisory committee, holds the resiliency of nature at the core of his advocacy work.

“As long as we can support the natural cycles and the natural flows and do what we can to conserve, things will bounce back,” they say. “This is what the Miccosukee and others have been saying, support the natural cycles, let the rise and fall, don’t be afraid of low levels, that’s what nature does, it has a cycle. So when I think about a diminished Everglades, that’s what gives me hope, that things can come back quickly if we support nature in her cycles.”

While most South Floridians and tourists may not initially understand the delicate nature of their central ecosystem, Cypress and other artists hope to use art as a mechanism for advocacy and education, inviting the public to engage with the Glades.

“I hope that the art that comes out of the Everglades whether we’re involved with it or not, helps people feel that it’s an invitation, like wow this is inspiring let me stop and take a look and consider this,” they say.

Deep in a cypress dome surrounded by alligator holes and epiphytes, Dominican-born and Miami-based artist Franky Cruz embodied the heron through a ritual of connection. For Cruz, the connection to land was critical during his time at the Artists in Residency in the Everglades (AIRIE) program in 2015. After months spent away from his home in Miami, he realized he needed to intentionally reconnect to his roots. During his residency he ingested information about the plume trade and two weeks after, he decided to honor the bird and all it had endured by embodying the prized heron. In the performance piece and photo series “Some Type of Heron” Cruz transformed himself into a heron using mostly recycled materials and ventured into a cypress dome in the National Park.

“I went in as this human but embodying the bird, like a shaman would for a ritual,” Cruz says to Observer. “There are moments when I was touching the and sitting in the . Before, I was a human worried about stepping on snakes and after I worried maybe I was getting too comfortable.”

South Florida artist and photographer Lisette Morales also hopes her work will inspire a deeper reverence for the Everglades, and a connection with nature. Her intimate portrait of Miccosukee grandmother Betty Osceola praying amidst Cypress trees and cupping will be presented on a Bushwick billboard beginning June 21 as part of a public art collaboration called “I AM ”.

“Only when you create a personal connection with land will you know how important it is to protect it,” Morales said to Observer.

Morales, who is a member of Love the Everglades, met Osceola during a four-day prayer walk in 2016 through the wetlands. The walks, which Osceola organizes routinely, serve as a way to deeply connect with the land while educating participants about its history and raising awareness about potential threats to the area.

“We need to listen to the indigenous communities, let’s follow their lead,” Morales said to Observer. “In the photo, Betty is showing us the is important, is life.”

As the rain dissipates, Cypress walks across the control area, noticing an anhinga perched on a bridge. The levels are lower than usual for this time of year.

They wonder aloud what tomorrow’s meeting with Burnett Oil Company, who applied to drill for oil underneath and across Big Cypress National Preserve in January, will bring. Cypress’ Love the Everglades movement has been participating in Osceola’s prayer walks to oppose the drilling, for the detrimental effects it would have on quality, historical sites, and places of sacred rituals. After months of action, Burnet Oil took notice and contacted the Tribe for a consultation.

“One scenario is that they feel compelled by the passion of our science and opinions and they withdraw,” Cypress informed Observer. “I’m sure the tribe will probably talk about how they oppose it in many ways and how their project might negatively impact the lands we care for.  So I’m not sure which way it’ll go, but if [the drilling] goes under our reservation we have something to say about that too.”

The great white heron may have survived after years of overhunting, and the ’s natural flow may slowly be returning in spite of literal roadblocks, but the Everglades can only recover if society follows the lead of indigenous leaders, activists, and artists who are already intimately listening to the land, and learn to value natural cycles over profit. 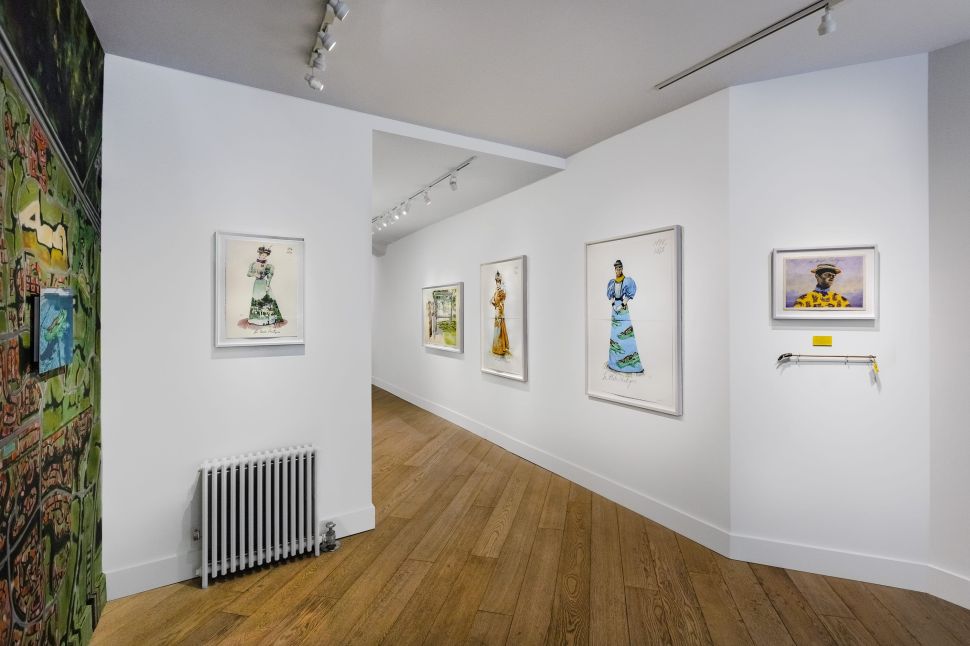