Dildos and convents and plague, oh my! Desperate nuns become lesbian lovers amid the frenzied backdrop of a 17th century Italian pandemic in Benedetta, Paul Verhoeven’s gleefully lurid period-piece look at sapphic lust and religious rot. The Danish director of Total Recall, Basic Instinct, Showgirls and Starship Troopers has never been one for subtlety, but this queer thriller and anti-Catholic screed sets a new high in lowbrow revelry. It’s smart smut, a witty, louche provocation that never takes itself too seriously. Does a child almost get crushed by a toppled Virgin Mary statue? And does she then start suckling its bared breast? Yes. Yes, she does.

From the first few moments, when a traveling performer lights his farts on fire while being chased by skeleton-clad agents of death, Benedetta signals its devotion to corporeal impulses. “Your worst enemy is your body,” says one of the convent denizens, among the many who try to ignore the sins of the flesh in the clamor for celestial bliss. But some nuns are more practical than others. “We’re all entitled to a sin,” shrugs another. “What’s yours?”

Sold off at a young age to a Theatine nunnery in Pescia after her family makes a 100-scudi “donation,” Benedetta Carlini (Virginie Efira) is a devoted servant of God. She’s also an eager bride of Christ, prone to vivid hallucinations of Jesus—at times deftly wielding a sword to protect her. But all that changes when a feral young peasant woman named Bartolomea (Daphne Patakia) barnstorms through the gates of the convent, begging for shelter from her sexually abusive father and brothers. There’s an electric charge when she and Benedetta meet, and soon carnal urges stir within both of them that lead to flirty disrobing, furtive fondling and a clandestine kiss.

Benedetta is conflicted and confused, forcing Bartolomea to stick her hand in boiling as a sort of public penance for their secret transgressions. But a vision of a crucified Christ bleeding profusely leads to Benedetta’s own stigmata, which bestows upon her newfound status as a holy seer and eventually elevation to Mother Superior. “Remove what separates us,” Christ tells her as she takes off his loincloth—revealing female genitalia. Newly empowered, and sexually emboldened, Benedetta embraces her sapphic trysts as a holy right. “There is no shame under the protection of God,” she gloats, enjoying multiple orgasms with abandon. Bartolomea takes it a step further: she whittles down Benedetta’s ruler-sized wooden Virgin Mary icon and turns it into a phallus.

Verhoeven’s profane titillation only spirals further outward, as the defanged Pescian Abbess Felicita (Charlotte Rampling) enlists Nuncio of Florence (Lambert Wilson) to help her expose Benedetta as a power-hungry fraud. The Nuncio knows a thing or two about exploitation: he’s a comfortably corrupted church elite whose servant mistress is heavy with child. (The pregnant underling even pulls out a breast and squirts milk at Felicita.) The only problem is that the Nuncio must travel to Pescia and risk exposing himself to the boil-covered populace outside the church walls. Their world is rife with pestilence both physical and spiritual.

Benedetta revels in bad behavior, from flesh-tearing flagellations to vaginal torture instruments like the Pear of Anguish. An angry mob beats a man to death, a woman jumps onto a burning fire and self-immolates. There are imaginary serpents and gushing decapitations. One climactic scene involves a heated discussion with two completely naked women standing outside. Why are they naked? Why not? It’s blood-drenched devilry and a satyr’s-eye view of sex. Religion is to blame, says Verhoeven, as it controls basic human desires and encourages base power abuses. The hysteria is hysterical. It’s also a bit thought-provoking—but only a little bit. 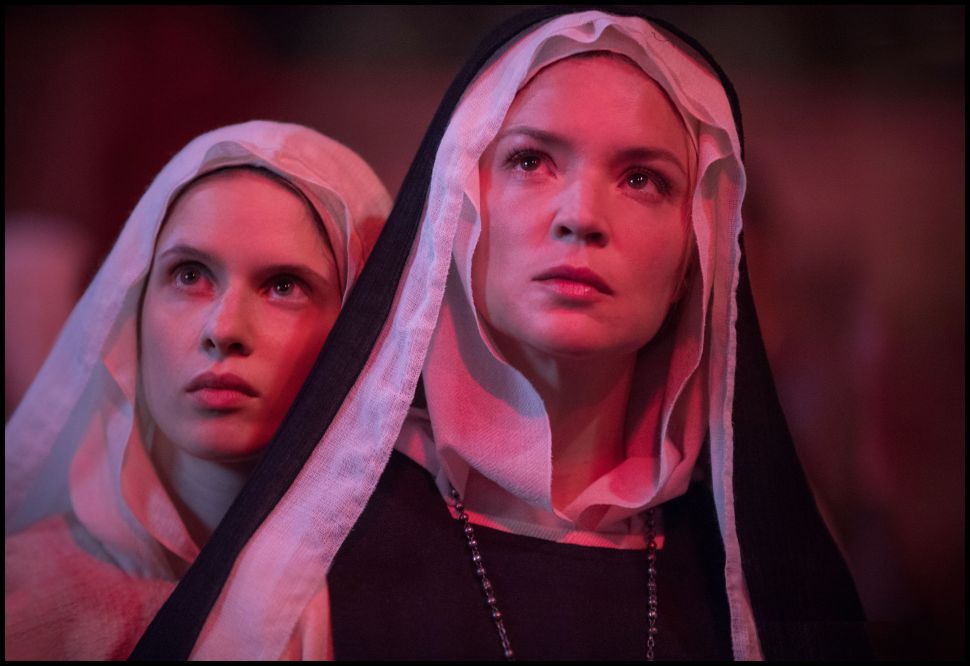