Benedetta is inspired by the 1987 non-fiction book Immodest Acts: The Life of a Lesbian Nun in Renaissance Italy by Judith C. Brown, and focuses on Sister Benedetta (a magnificently campy Virginie Efira), who seems to have a special connection to God and the Virgin Mary and is promised as a bride to Jesus by her father, who pays a large amount of money to have his daughter enter a covent in Pescia, Tuscany. Almost immediately, Benedetta’s absolute devotion and the strange ways her prayers seem to be answered creates conflict between her and the cynical Mother Superior Felicita (Charlotte Rampling in her best performance in years), who seems more interested in collecting dowries than spreading the word of Christ.

Like Martin Scorsese in ‘Silence,’ Paul Verhoeven looks at the crux between devotion and suffering, both psychological and physical.

Of course, things get even more complicated with the arrival of a new nun, Bartolomea (Daphne Patakia) who enters seeking sanctuary at the convent from her abusive father and brother. As soon as Bartolomea arrives, Benedetta starts getting very hot visions of her very hot husband Jesus decapitating would-be rapists and CG snakes in a cartoonishly violent fashion. All her visions culminate in Jesus asking Benedetta to make out with him, which results in her getting stigmata in her dreams. While most of the people in the convent take this miracle as a sign that Benedetta is some sort of chosen one, the Abbess Felicita isn’t so sure. “No miracles occur in bed,” the abbess argues, delivering one of the biggest laughs in a surprisingly funny film.

Like Scorsese in Silence, Verhoeven looks at the crux between devotion and suffering, both psychological and physical. The stigmata — the appearance of bodily wounds in places corresponding to the crucifixion wounds of Jesus — is interpreted as a divine sign, and the more Benedetta exhibits excruciating pain, the more that is seen as proof of her devotion. But her suffering at having to hide her love and lust for Bartolomea is just proof that she may be a false prophet.

For a director so interested in the history of Christianity that he published a book about the life of Jesus Christ a decade ago, Verhoeven’s ‘Benedetta’ has a rather secular focus.

Though much has already been made of the lesbian nun sex scenes, Benedetta is so much more than that. For a director so interested in the history of Christianity that he published a book about the life of Jesus Christ a decade ago, Verhoeven’s Benedetta has a rather secular focus, being more interested in the idea of the church as a place to gain power when society wouldn’t give you any. Take Abbess Felicita, an antagonistic character in whom Verhoeven places the most sympathy for most of the runtime. She doesn’t show an ounce of love for the church or God compared to Benedetta, but she has devoted her entire life to the convent in order to gain political power in an organization that doesn’t give a shit about women.

Then there’s Benedetta herself, played magnificently by Efira, who should be in discussion come awards season. She gives a performance you cannot take your eyes off, even if we never truly know whether Benedetta is a false prophet or the chosen bride of Christ with the powers to stop the plague from hitting the town — there’s a comically and terrifyingly timely subplot about lockdown measures against the plague. A major theme in Benedetta revolves around asking who decides what God’s will is, who decides what is blasphemy and what is divine intervention. When Benedetta suddenly starts convulsing and her voice changes, those around her instantly recognize it as a sign of God intervening through her (even if the scene plays out more as something out of The Exorcist) but it doesn’t matter what they think, but what the church’s representative says.

While the book that the movie is based on touches upon Benedetta’s visions, Verhoeven greatly expands their role and at times even frames Benedetta as a Christ figure in her own right. That the film takes place during the time of a widespread plague and just as a comet illuminated the sky with blood red colors only helps increase the paranoia and superstition of the town, and Verhoeven wastes no time weaponizing this for all its thematic power.

Benedetta is not a subtle movie. It literally wears its message on its wrists, and forehead and feet. But it still manages to entrance you with hypnotic performances, hilarious camp and unabashed commentary to make this a worthy addition to Paul Verhoeven’s polemic oeuvre. 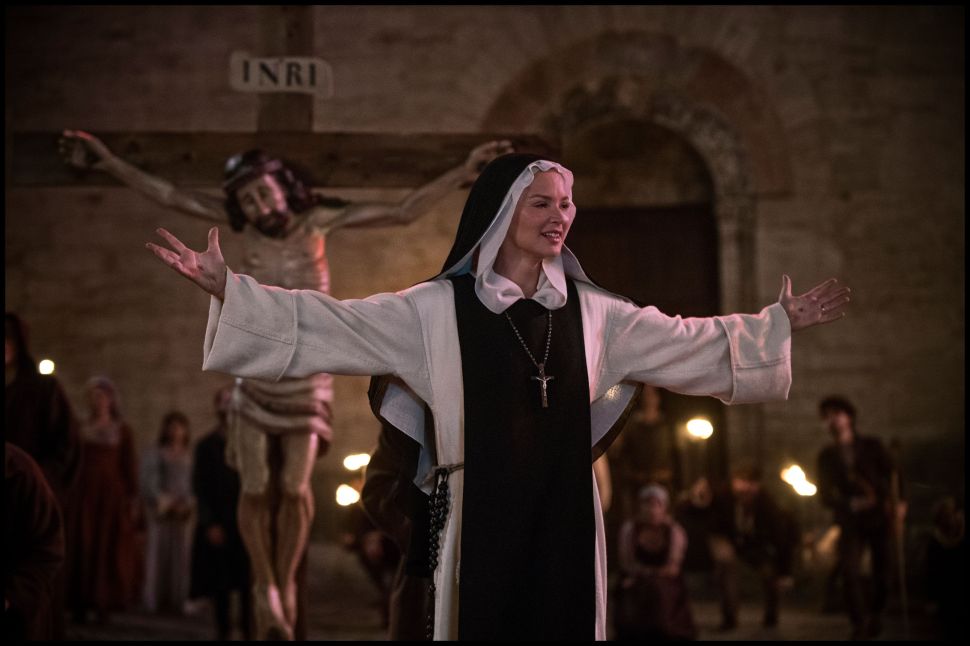