Scarlet Johansson is one of Hollywood’s most famous Jewish actors. She’s rarely thought of as such, though, because, with her blonde hair, she doesn’t look stereotypically Jewish, and because she usually doesn’t play Jewish characters. Assimilation is a Jewish experience too, though, and many of Johansson’s roles play with the tension between embodying mainstream white Americana and embodying something, or someone, slightly different. Black Widow, the story of a standard middle-American suburban family who turn out to be Eastern European infiltrators, is very much in that tradition.

In 2001’s Ghost World, Johansson’s first major film, her blonde-haired WASP character is literally described as “Aryan” in contrast to her dumpier, funkier Jewish friend. From there, the actor went on to play a series of roles in which she embodied a perfect white American beauty ideal—and also, sort of, didn’t. In Lost in Translation (2003), she plays an American woman out of place in Japanese society, a story of failed assimilation echoed in a less artful, more egregiously racist manner when she played a Japanese woman in a white body in Ghost in the Shell (2017).In Under the Skin (2013), she plays an alien who looks like a perfect Hollywood star to lure men to their deaths. Most critics read the film as a feminist parable, and it certainly is that. But it’s also, arguably, about (not quite) assimilating—about wearing someone else’s skin.

Johansson has also appeared regularly in Marvel Cinematic Universe films over the past decade, playing Natasha Romanoff, aka the Black Widow. Created by Italian-American Don Rico and Jewish-Americans Stan Lee and Don Heck, the character in the comics was originally a Russian super-spy. In the films, she’s a defector, and we first meet her pretending to be billionaire Tony Stark’s secretary to keep an eye on him for the secret agency SHIELD. Again, she’s an outsider who is expert at appearing to be bog standard American normal.

Not a single character is even identified as Jewish in the script. But that’s telling in itself.

The new Black Widow film, directed by Australian Jewish convert Cate Shortland, takes that conceit and flies about in various jets with it. Most of the movie is set during the events of Captain America: Civil War (2016). But it starts in the mid-’90s, when Natasha was a child living with her family in suburban Ohio. That family, though, isn’t her real family—they are Russian spies impersonating boring Americans. After super-soldier dad Alexei (David Harbour) and super-scientist mom Melina (Jewish actor Rachel Weisz) complete their mission, they abandon the States, and Natasha and her faux sister are sent on to a La Femme Nikita like assassin program, where they have their uteruses cut out and are trained to kill.

As with most MCU films, this one is mostly devoted to fight choreography, car chases, explosions and foiling the plot of a standard-issue would-be world conqueror. The emotional core of the movie, though is the relationship between Natasha and her family, particularly her “sister,” Yelena. The two remember their three years in Ohio as a kind of idyll, the one time they had a real family and real bonds.

The Disney+ series WandaVision is ambivalent about the violence that goes into creating American suburbia’s vision of bland happiness—violence that at least for a while included exclusion and segregation of Jewish people, and still includes exclusion and segregation of Black people. But Black Widow is less conflicted. Natasha’s assimilated, ersatz self—when she leaves behind Eastern European ethnic identity and becomes American—is her most authentic self. The film starring a Jewish-American actress makes an unabashed case for embracing America’s own vision of itself, even when that vision is obviously false.

Part of what’s entertaining and moving about Natasha’s false family is that it is false.

At the same time, though, no one is watching Black Widow for the scenes of suburban happiness. As Yelena says, despite all the trauma and brainwashing and wading through blood, being a super-spy assassin hellbent on destruction and vengeance is often “fun.”

Part of what’s entertaining and moving about Natasha’s false family is that it is false. Her dad is much more interesting as a blustering superhero with a thick accent than as a typical midwestern dad coming home from some boring job, just as Natasha herself is the focus of the story precisely because she’s clambered out of that mid-American identity, leaving it behind her like the discarded flesh suits in Under the Skin. The super-team the Avengers are wholesome and decked out in red, white and blue. Natasha is an Avenger sort of and sometimes. But as she tells one of her pursuers, her history goes back further than that.

Obviously, Black Widow isn’t about the Jewish-American experience in some direct or intentional way. Not a single character is even identified as Jewish in the script. But that’s telling in itself. Both America, and Hollywood, are obsessed with how those who don’t belong are subsumed by normality, and with how the normal retain the residue of not belonging. American identity is created—sometimes for better, often for worse—through highlighting and erasing difference, as assimilation is embraced and repudiated. Thus the popularity of all those Jewish-created superheroes: oddly powered and garbed weirdos who fight for the status quo by donning double identities. 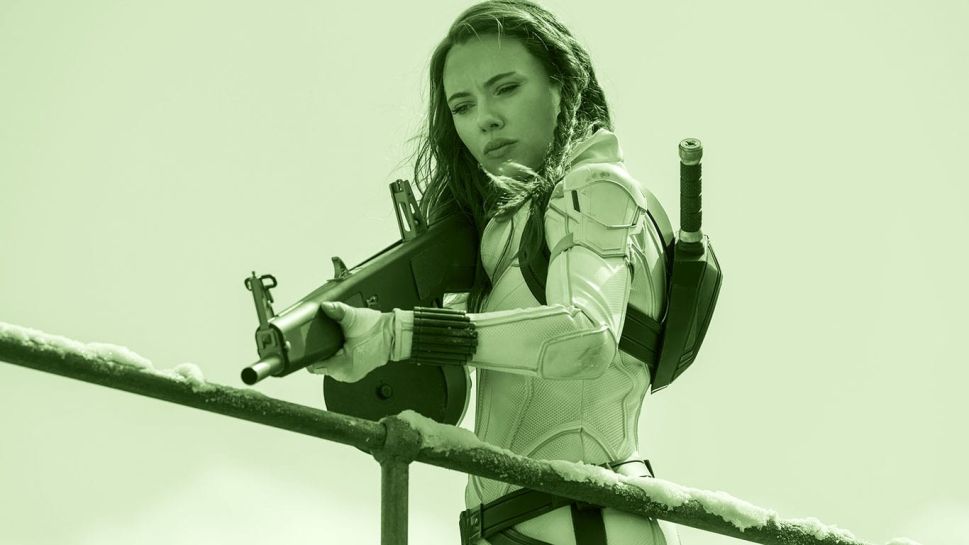