While the Cannes Film Festival is renowned around the world for being the premier destination for cinephiles, where the best motion pictures from all over the globe make their debut, the festival has historically overlooked the animation medium — even if it is still much better than most major festivals. Though such classics as Pixar’s Up, Peter Pan, The Tale of Princess Kaguya and, yes, even Shrek, all premiered at the festival, most of these play out of competition or at the adjacent competitions that aren’t technically a part of the main festival. This year was no different, as wonderful works of animation made their debut at the festival to show the best of what the animation medium has to offer, even if none of them are eligible for the Palme d’Or.

From retellings of classic French fairy tales, to adaptations of manga and the most famous Holocaust story, to a moving documentary, there was something for everyone in and around the Palais des Festivals this year. Here’s what we saw.

Satoshi Kon is one of the most celebrated animation directors of all time, a man responsible for the best horror animated film ever made (a big feat given how near-impossible it has proven to combine the genre with the medium), who influenced everyone from Christopher Nolan to Darren Aronofsky, before leaving us too soon when he passed in 2010 at the age of 46.

French director Pascal-Alex Vincent offers an emotional tribute to a master of the craft, recounting Kon’s career while providing context for what made each of the director’s main works so memorable and influential, via dozens of interviews with scholars, fans and fellow directors like Mamoru Hosoda, Rodney Rothman and Aronofsky himself, who recount how much Kon’s work meant to them.

Sadly, the documentary ends up being a little bit too much like a Wikipedia entry rather than a documentary. With most of the runtime devoted to the talking-head interviews that take us beat by beat through Kon’s best known works, the film spends too much time on broad, relatively shallow readings on those works. This results in a film longtime fans or even those with basic knowledge of Kon’s work, or even anime in general, won’t get much out of. It is also disappointing to see that, despite spending time recounting Kon’s time as a manga creator, there is rather little in the documentary about the filmmaker’s screenwriting career. Though not nearly as known as Paprika or Perfect Blue, it is a shame that there isn’t even a mention on Kon writing the first adaptation of the massively popular JoJo’s Bizarre Adventure, or a nod to the time he finally got to work with his hero Katsuhiro Otomo in the fantastic anthology film Memories.

That being said, as a tribute to a legendary filmmaker, Satoshi Kon: The Illusionist delivers, especially when discussing Kon’s unfinished project Dreaming Machine.

Where Is Anne Frank

Oscar-nominated Israeli director Ari Folman makes a much-deserved comeback with yet another animated movie that defies any stupid assumption that “animation = Disney,” as he adapts The Diary Of a Young Girl by Anne Frank for a new generation, all while calling out how unfortunately timely and timeless her story really is.

Set “one year from today” in an Amsterdam filled with monuments to the teenage Jewish girl, from the Anne Frank theater, to the Anne Frank school, to the Anne Frank theater. Yet when Kitty, the imaginary girl Frank dedicated her diary to, comes to life, she is dismayed to find that very few people actually know that there was a person behind the name. As Kitty reads the diary to try and find out what happened to her friend, she also has some adventures of her own, even developing a crush with a Peter of her own.

Folman recreates the story of Anne in beautifully lush and cheerful flashbacks to contrast the monotone grey of modern-day Amsterdam, not only subverting tropes of historical movies but also bringing home the point that we are still living in the dark repercussions of past atrocities. The animation is beautiful, with the camera distorting perspectives in order to place us in our young protagonist’s viewpoint. Though Nazis are present, they appear as voiceless, cloaked malevolent creatures with pale white masks, always standing in a phalanx, ready to strike.

First conceived by the Anne Frank Foundation to address the rise in Holocaust denialism and antisemitism, Where is Anne Frank does a marvelously poignant job in updating Frank’s story to the modern day. Folman draws direct parallels in the persecution of Jewish people and today’s refugee crisis in Europe. What the film lacks in subtlety it makes up for by repackaging Anne’s stories and memories into a lesson for today’s teenagers, who should not only know Anne’s story, but also how it relates to Otto Frank’s belief in the importance of saving the life of even one child.

The Summit of the Gods

Patrick Imbert adapts the Jiro Taniguchi’s manga The Summit of the Gods into an engrossing, nail-biting animated drama/thriller about mountain climbing, obsession, and plain beautiful landscapes. The film follows a Japanese photographer who becomes obsessed with the search of a long-lost Japanese mountain climber who may have found a camera that could prove whether or not English mountaineer George Mallory reached the top of Mount Everest three decades before the official first expedition to reached the summit.

Imbert captures the obsession and passion that drives these men and women to embark on incredibly dangerous treks in order to be the first at something. Though not a documentary, The Summit of the Gods takes a meticulous approach to technical accuracy in its portrayal of mountain climbing, showing you every single instrument being used, closing in on every step, every pick of the ice axe, every moment of planning in excruciating yet fascinating detail. The film also uses silence and space in a way few Western movies do, employing the Japanese concept of ma (negative space) to accentuate the feeling of being alone in nature. There are long stretches where we hear nothing but the cold wind and the long, arduous breathing of the climbers while grandiose vistas are gorgeously recreated with expressionistic colors. Employing a mix of masterfully crafted 2D and 3D animation, and aided by a poignant script that doesn’t shy away from the dangers of what it is portraying, The Summit of the Gods rivals any live-action to deliver one of the best movies about mountain climbing ever.

Mamoru Hosoda, who at more than one point was declared “the new Miyazaki” is back with what may very well be his best movie since Wolf Children. The filmmaker reuses his idea of a virtual world where people have online avatars to give us a film where five billion people inhabit projections of their inner strengths in a virtual reality called U — a place where everyone gets to reinvent themselves and everyone’s greatest fear is to have their real persona being revealed to the world. We meet Suzu, a teenager who discovers a world beyond her provincial life when she inadvertently becomes U’s great new sensation, Belle, a pink-haired Disney princess-like avatar designed by veteran Disney character designer Jin Kim. Her Beast is a a virtual fighting game champion with a bad reputation and a dark secret.

Hosoda steps up the visual splendor of his previous films to give us a world unlike anything we’ve ever seen with Belle. Boasting mind-blowing particle and background animations, U is home to hundreds upon hundreds of background avatars of increasingly inventive designs, as Hosoda swaps art styles to reflect the endless possibilities of his virtual world. The 3D backgrounds give way to 2D painting-like landscapes, a gothic castle that evokes the royally magnificent designs of Gankutsuou: The Count of Monte Cristo and even Suzu’s social circles being represented by a game of Clash of Clans.

While the Beauty and the Beast storyline feels like retreading old ground, Hodosa updates the tale as old as time by adding a poignant story of bullying, abuse and how the internet allows us to form unique human connections, evoking not only anime series like Serial Experiments Lain, but also Kyoto Animation’s celebrated film A Silent Voice. The result is a film that becomes true as it can be thanks to relatable characters, an emotional story set in a fleshed out and beautifully animated world, and also a parade of catchy J-pop bangers that are sure to become additions to your daily playlist. 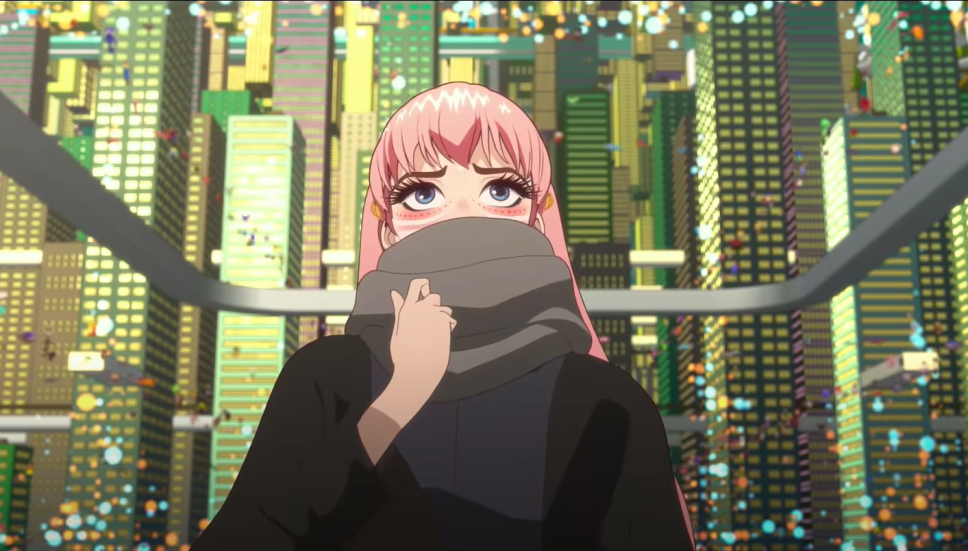 Filed Under: Movies, Entertainment, belle, The Summit of the Gods, Satoshi Kon: The Illusionist, Where Is Anne Frank