It is almost impossible to talk about Han Jae-rim’s Emergency Declaration without spoiling at least one of its many surprises. The disaster film, which premiered out of competition at the Cannes Film Festival, hits both at allegories for our pandemic nightmare by taking place mostly on board a contained, confined airplane full of strangers, but also at our literal nightmares of catching a deadly virus.

Emergency Declaration stars Lee Byung-hun as a man trapped in an airplane where a terrorist is threatening to release a deadly virus, while Parasite star Song Kang-ho plays a detective in a race against the clock to stop the attack, or at least find out more about what the virus is. As tensions rise onboard the plane, so do they on the ground, as people start to discover and fear what might happen when the plane lands.

When I finally decided to embark on this movie it was right before the coronavirus pandemic broke out, so it became scary timely.

The film checks all the boxes of a good disaster movie, introducing high stakes in a small, confined, very fragile space floating thousands of feet in the air, while also including intimate, emotional stories both on the air and on the ground. Director Han also makes sure to shoot the film almost as a documentary, favoring handheld cameras that get close and personal to the action and the performances, resulting in a thrilling disaster movie with nail-biting set pieces that never skimps on the feelings.

Shortly before the world premiere of Emergency Declaration spoke with director Han and Lee Byung-hun about the scary timeliness of the movie, acting on a practical spiraling plane, and more.

Observer: It’s been a while since we’ve got a good airplane thriller, how did the idea for the movie originate?

Han Jae-rim: It was actually a concept I had about 10 years ago, that of a terror attack on a plane. There was a production company that proposed me this project, but unfortunately, I couldn’t do it. So I went on another project, but weirdly I couldn’t forget about this project because I also suffer from airplane phobia. And when I finally decided to embark on this movie it was right before the coronavirus pandemic broke out, so it became scary timely.

Lee Byung-hun: When I read the other script, it was interesting because was really realistic. I thought that you could be completely immersed in the movie, and that’d be the biggest strength of the project.

Was the virus attack aspect always part of the script or did that come in later?

Han Jae-rim: It was always part of the script, but for me, that wasn’t the important part. For me what makes the movie is the terrorist aspect and how sudden it is. Nowadays when there is a terror attack, there is not any human reason or justification. It just happens and you don’t know why. So, for me what was interesting was to have all these people who are experiencing fear in an airplane, because it’s a space where you cannot escape. When the pandemic occurred, I was quite embarrassed and surprised because I didn’t expect that coincidence, but the most important part of the film isn’t the coincidences to today but the human beings on the plane confronting the virus and the terror attack.

How did you shoot the plane scenes, particularly when the plane starts spiraling out of control?

Han Jae-rim: The airplane was actually made in Hollywood, but all the rest for the technical aspect, everything was done in Korea. We had a circular gimbal with six corners that allowed us to have a real set that could rotate 360 degrees. Of course, the director of photography and all the actors were strapped in so they wouldn’t get hurt. We also used a handheld camera so it was a really analog way of making the movie, we did it almost all practical, with only a little CG.

Lee Byung-hun: In the beginning, I was really tense and nervous because of the shoot. And even in Hollywood, someone told me that they already had an experience with a small plane rotating completely at 360 degrees. But apparently, it hadn’t been done with such a big plane, it was the first time someone had done it. So we were actually like a pioneer. Still, we were all quite anxious because if a seat just falls down, it could really lead to a big disaster. Thankfully after the second or third full rotation, I just felt that I was on a roller coaster. So I felt more relaxed.

How much of the plane did you build?

Han Jae-rim: We build separately business and economic class, because if for example, you have a complete whole plane, you can not actually move. But we scaled it from real 777 planes because that’s the kind of plane you’d take from Seoul to Honolulu.

The film walks a fine line between drama, thriller, and also has a lot of comedy to it. How do you balance that?

Han Jae-rim: The movie is technically a disaster movie, but as much as possible, I wanted to shoot it like a documentary. During the filming, I was focused on my actors, on following all their emotions. My goal was to make it as realistic as possible, so you could feel both the more comic side of the actors and also the sadder scenes like you were there.

With a movie mostly concealed to the same place, how do you make the shots feel varied?

Han Jae-rim: That was also one of my anxieties. That’s why we use the handheld camera and with the director of the photography, we really wanted it to be very precise in the storyboard because we needed to know from what angles and from what point of view we would shoot. We also used a lot of previz with the model of the airplane so we could plan all the lenses to be as precise as possible.

You mentioned that the virus aspect was always part of the script, but what’s been the most surprising thing about seeing the movie now with everything going on?

Han Jae-rim: We actually had a discussion about it, because I wondered what the movie could mean, and I was a little bit frightened because, in a way, the reality was the stronger than the fiction. Even if we are finally on our way out of this situation, I wanted to tell a story of how despite human beings having a selfish instinct and a lot of bad in us, we also have this great strength. For me, the movie is like a message of hope that we can come together in the darkest times, and about people thinking about more than just themselves.

Lee Byung-hun: I thought that it was maybe a bit exaggerated when the plane wants to land and all the people on the ground start protesting because they are afraid of the virus spreading when the plane lands. I thought it was a bit too cinematic and exaggerated, but in real life there were similar stories because of COVID, where people didn’t want plans to land and carry the virus. So that was the biggest surprise for me seeing the film, that even that was realistic. 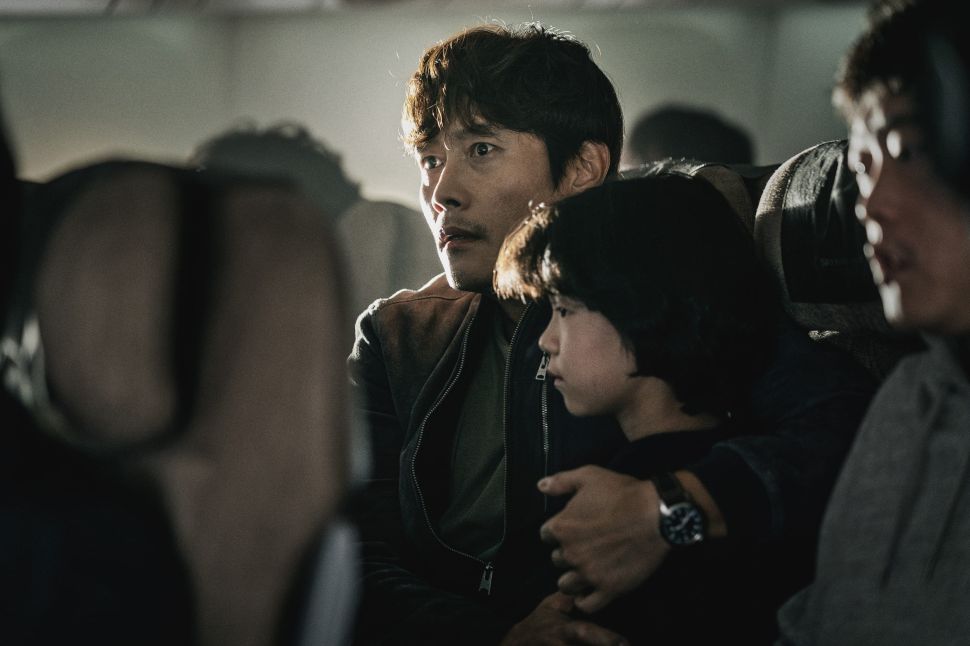