The billionaire space race is in full swing. Jeff Bezos is all in on Blue Origin. Richard Branson has Virgin Galactic, and Elon Musk has SpaceX. Both Branson and Bezos have already ventured into space. SpaceX is slated to launch its first civilian mission in September. Between the three, this space endeavor has been seen as a vanity project as the effects of climate change are becoming increasingly apparent.

This year alone we have seen wildfires in the west that brought smoke as far east as the New York metropolitan area, parts of New England and Washington D.C. There have been heat waves that drove temperatures in Canada well into the triple digits. Earlier this year, a massive freeze gripped Texas, overwhelming the power grid and causing massive damage to the nation’s food supply for seasons.

Meanwhile, the three billionaires have set their sights on leaving the planet. While the move is historic, it pales in comparison to what NASA was able to do in the 1960s.

During the 60s the space race was part of the American identity. It was a reflection of American innovation that most could get behind. That’s not the case this time around. Just after his space trip, in a tone deaf display, Bezos said, “I want to thank every Amazon employee and every Amazon customer.”

That’s on the heels of fairly consistent reporting this year that under his watch, Amazon warehouse workers faced abhorrent working conditions and dealt with unrealistic expectations. According to The New York Times, Amazon workers were so overworked that some felt compelled to urinate in bottles to avoid taking breaks. Only months ago, during prime day, workers were reportedly called on to work 12 hour days, all for notoriously low wages.

Under Bezos’ watch the company has maintained a significant carbon footprint. According to an Associated Press report, in 2018, it was equivalent to some small nations.

By the same token, Amazon has made strides to lower its carbon footprint and actually leads one of the most robust climate pledges in corporate America. The e-commerce giant has also compelled other large companies to sign on as well.

Their individual carbon footprint is significant. “The carbon expenditure for one long-haul plane flight is roughly one to three tons of CO2 per passenger. A rocket launch costs about 200 to 300 tons of CO2, shared by four passengers or so,” Dr. Mann adds. “So basically it’s 20 to 60 times as much carbon per individual.”

Emissions by Virgin Galactic’s VSS Unity vehicles contribute to the production of nitrous oxide, which is a significantly concerning greenhouse gas. It directly affects the o-zone layer of the atmosphere and has fueled the hole over Antarctica. Virgin Galactic plans to operate 400 space flights annually.

On the other hand, Virgin has taken steps to reduce the amount of greenhouse gas emissions it would otherwise produce which can be attributed to the craft’s construction. Using lightweight materials, the spaceplane needs less fuel than it otherwise would. More broadly, the company has built a reputation of taking environmental issues seriously. Virgin Atlantic was one of the first airlines to offer passengers the ability to purchase carbon offsets.

SpaceX emits liquid kerosene and oxygen. According to the Smithsonian, “the amount of kerosene in three Falcon 9 rockets is roughly 440 tonnes and RP-1 has a 34 percent carbon content.” That adds up. SpaceX is planning 395 space flights annually. Reportedly, SpaceX already sent 900 objects into space this year. One SpaceX flight generates a carbon footprint equivalent to the average carbon footprint of 278 people combined.

Blue Origin is the cleanest of the three, using hydrogen and oxygen as propellants. But its launch plan is not yet as far along and robust as SpaceX and Virgin Galactic.

While space travel right now is limited, that is expected to change rapidly. In the U.S. alone it is estimated that the space tourism market will almost double in size in less than a decade. The markets in China, Germany, Japan and Canada are also expected to see double digit growth in the next decade. The question is, will these billionaires be able to find a more sustainable way to venture to space, or are we stuck with an increasingly concerning player fueling climate change? 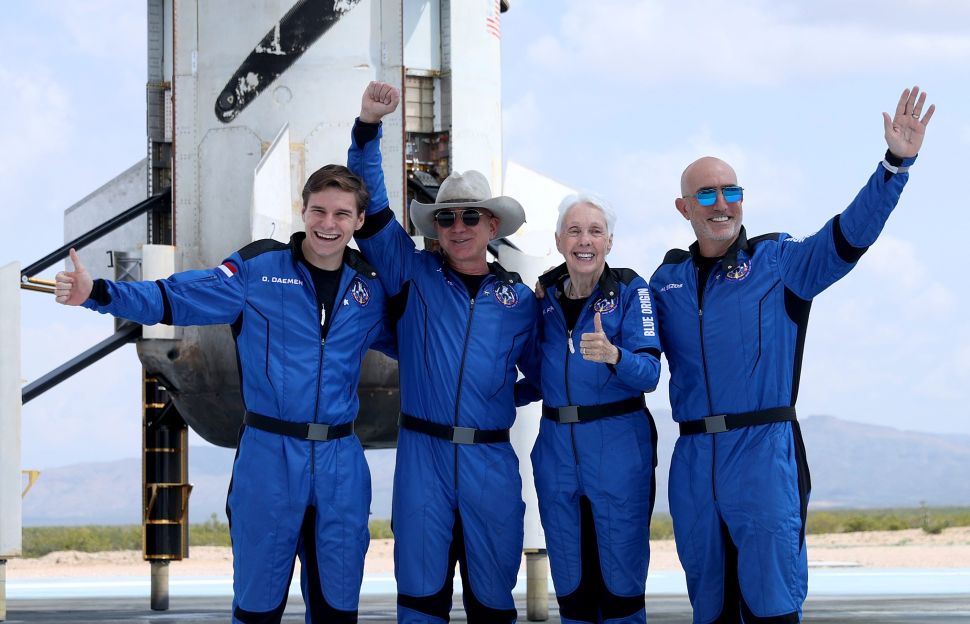