Loosely based on a Disneyland amusement-park ride, which in turn is based on a dozen other Disney rides, Jungle Cruise is a numbingly overproduced family film unlikely to appeal to any family member over eight years old. The ride itself has been entertaining people for decades. As your boat tugs through the Brazilian jungle, alligators snap, monkeys scream and alleged thrills await behind every turn. Kids of all ages love it, and grownups find it amusing, too. It is doubtful that the noisy, predictable and woefully uninspired movie version will produce the same reactions. A torturous waste of time and money, its mechanical contrivances are many and its entertainment values are few.

The plot, which grows more convoluted and pointless by the minute, begins in 1916 London at the start of World War I, when an adventuress named Lily Houghton (Emily Blunt) embarks on a dangerous expedition to the Amazon jungle to find a magic tree with amazing healing powers called Tears of the Moon. Apparently the petals of its legendary flowers are rumored to cure everything from shingles to syphilis, so Lily and her brother MacGregor (Jack Whitehall) set out to pick some and take them home to the civilized world. Reluctantly engaged to guide them is Frank Wolff (Dwayne Johnson), a big, beefy buffoon of a sea captain with a tramp steamer.

They hate each other at first sight. Lily calls Frank “Skippy” to annoy him. Frank annoys Lily and everyone else with gags like “We’re heading into headhunter territory, which is a terrible place to be-headed.” (These are the jokes, folks.) Still they chug ahead, through typhoons, rapids, explosions and countless distractions designed to make you forget that there is no plot and the movie is going nowhere. The director, Jaume Collet-Serra, seems to be making it up as he goes along.

The villains are a 400-year-old zombie conquistador with snakes crawling out of every orifice, an evil German imitator of the Kaiser (Jesse Plemons) who rules the Amazon from a submarine and a nasty thug with a talking cockatoo (a wasted Paul Giamatti). Add an army of bees and cannibals, and you get the idea of how to drag a 20-minute theme-park ride into nearly two hours of cinematic tedium. Lily wants to use the Tears of the Moon and its medicinal powers to change the world. The German wants the flowers to help Germany rule the world. Everything is played for laughs, including a ferocious computer-generated tiger named Proxima that turns out to be timid as a gingham cat, and even the cannibals, who confess they are really dress extras who hate their makeup and complain about their costumes. Instead of thrills, the whole thing is played for laughs. Unfortunately, no one in the cast displays any true sense of comedy timing — especially the ruefully miscast Dwayne Johnson, who is about as funny as a knee replacement.

Every scene in Jungle Cruise is derived from other, more original films. You’ll spot familiar steals from Raiders of the Lost Ark to Pirates of the Caribbean and The African Queen, but it took three writers to come up with the dismal jokes from old Vegas nightclub acts. To its credit, Jungle Cruise has some admittedly watchable performances, mainly by Emily Blunt as a female Indiana Jones in a pith helmet and safari jacket, and by Jack Whitehall as a rare gay character in a Walt Disney film. If you don’t fall asleep, there’s plenty to look at, including action scenes crammed with special effects, as well as lush rainforests played by Hawaii, Australia, and — wait for it — Atlanta, Georgia. 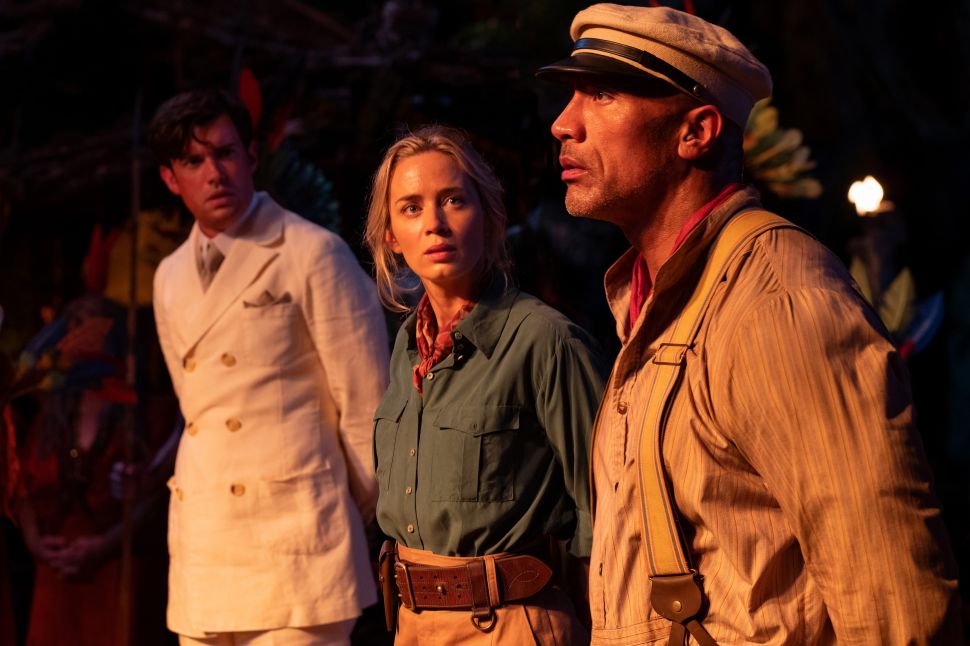