Khari Turner’s debut solo show in New York City, “Breathing to Air” opened Saturday July 10 at Ross-Sutton Gallery on Wooster Street till August 7. Only the second solo artist to show at Ross-Sutton since its opening in December, Turner is a former Austin Peay State University cheerleader and mascot, originally from Wisconsin. His work combines abstract and figurative painting techniques, and (literal) from oceans and rivers with a historical connection to Black history.

Opening night of “Breathing to Air” is a bright and energetic pep rally for the former college cheerleader and current Columbia MFA student. The crowd is not quite at pre-pandemic numbers, but it’s getting there. The Ross-Sutton Gallery primarily shows the work of Black and African diaspora artists, attracting an opening night crowd. Turner stood beside his painting Swim Lesson for much of the time I was there, describing the sourcing, use, and symbolism of his unique materials. Every so often he would greet an old friend with a bear hug and his laughter would echo the length of the gallery.

Swim Lesson, one of the show’s stand-out works, depicts a Black female figure floating in a pool, her eyeless face turned to the sun. The crystalline, sun-kissed pool effect is created with layers of paint chopped and scraped across the canvas. Her pool buoy, made of actual wood, is striking, almost disturbing when viewing the painting in-person—such a heavy object splintering the easy blues and the relaxed bobbing form. Much of Turner’s work contains this element of a trauma glimpsed by accident: preventing us from taking easy pleasure in his elegant lines and playful textures.

Several of the big, bright canvases depict eyeless Black subjects, rendered in charcoal and ink. Mouths and noses are painted with delicate realism. The forms appear newly born from the ocean. They rise out of the salts, sands, and minerals of actual ocean waters: materials that have been mixed in with the oils and applied to the canvas. Palm fronds add a leathery green layer to several works. In Dare to Find Me, a female figure, in Venus-stepping-out-of-the-bath posture, is concealed inside a womb-like cavity of enfolding plants.

Turner’s flirty fauvist palette; the majestic figures moving atop their oceans; the endlessly playful textures and materials—each paint stroke in “Breathing to Air” evokes an eagerness to be born. It bubbles, it splashes, it—one anticipates—finds easy passage downstream through the rugged terrain of the art world.

Khari Turner is a precise and artful draftsman. His figures have a sculptural roundedness, a serious solidity amidst the dazzling swimming pool ceruleans and arctic ultramarines. Many are ornamented in frenetic, streaking lines of ink, tagging the final layer of his work—atop sand and oil and wood and watercolors—in a maximalist graffiti flourish.

The Ross-Sutton Gallery describes “Breathing to Air” as “a show about birth and rebirth. As a baby born into this world, the first breath is always the hardest. We start as an idea to being, sharing all of our firsts with the world. We are the seed of our families’ tree. As with seeds that turn into trees and plants, we are watered and grow. We endure.”

Turner’s materials are heavily symbolic, each item representative of a different aspect of Black life from culture to history.  The he sources for his materials, from the coast of Senegal, Lake Michigan, the Milwaukee River, the Pacific Ocean, and the docks surrounding Manhattan; his woods—African mahogany, yellow pine, white oak—tell a story and speak an elemental language meant to connect us to the places his materials hail from. “Wood as vessel, as trail, body as paddle, and sand as landing for new beginnings for the artist’s journey” the gallery’s press release states.

With Khari Turner’s New York City debut, gallerist Destinee Ross-Sutton brings to the New York art world an exciting new talent. There was a decidedly un-stuffy party atmosphere on opening night at the gallery. Young art students danced to a DJ and shouted to each other above the music. They seemed eager to ensure that the vibe of the opening was as effervescent as Turner’s paintings. It feels right that these bold, bright works, painted in the final months of the pandemic, should find this bumping debut—and in a newly reopened city no less, flush with life after its long hibernation.

The paintings in “Breathing to Air ” ask for and indeed deserve applause from a stadium full of fans. As Turner’s career unfolds, however, I would be interested to see how his less gregarious qualities continue to reveal themselves and mature. There is, for instance, an introverted and introspective quality—a beautiful silence—to works like Phantom in the Rearview or abstract works like Between’em. Part of me wanted to see these qualities foregrounded in the more emphatic paintings. Turner has literally painted with the ocean, and I would be fascinated to see him plumb its depths. 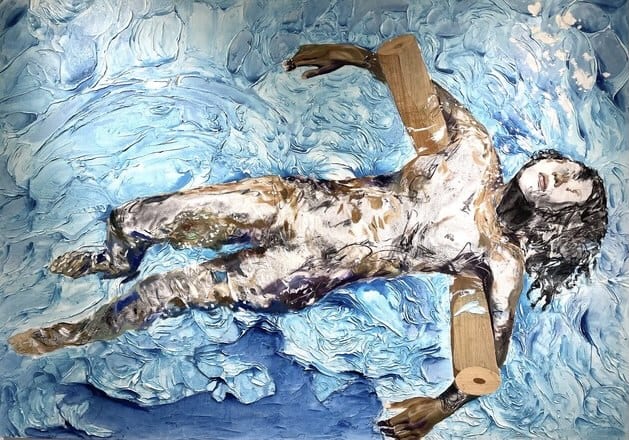