When Kiana Madeira was a child, she became enamored with a fictional character (and movie) that was admittedly before her time: Danny Zuko in Grease.

“My 5-year-old brain thought, If I could be an actor and be in a movie just like him, then I could be him and we’ll fall in love and get married,” Madeira, who was born in the ’90s, recalls in a recent phone interview with Observer. “I didn’t know that movie was shot in the ’70s, so I kind of came to terms with the fact that we were not going to get married, but still, that desire to be in movies never went away.”

After signing with a talent agency in Toronto at the age of 10, Madeira began accumulating a steady number of Canadian acting credits for over a decade. She eventually realized that in order to hone her craft and open herself up to greater opportunities, she would have to move south of the border. Yet when she did, she was confronted with an issue that continues to plague international actors who are looking to cross over into American markets.

“In a way, it almost feels like your career starts again when you get to the States, because a lot of the programs that we do in Canada are not even shown here,” Madeira explains. “So when I finally made that move, I was meeting with agents and they were saying, ‘Oh, we’ve never heard of this before.’ So although I had a lot under my belt in Canada, it was kind of like starting from step one.”

While that initial setback can be enough to discourage and embitter any young, aspiring actor, Madeira says that the opportunity to make a new name for herself has given her a renewed appreciation for “auditions and every opportunity to be on set” as she tries to bring “newness and freshness” to every role.

“Although I had a lot under my belt in Canada, [acting in the U.S.] was kind of like starting from step one.”

“But at the same time, I do feel like I’ve learned so much, especially because when I came to the States, I was able to lead projects in a different way. There were so many opportunities for people of color to lead projects that I really wasn’t experiencing at the time in Canada,” she notes. “Now I have experience under my belt to be No. 1 on the call sheet on set and kind of lead the cast in those ways, and I think it’s really added to my professionalism.”

With guest spots in The Flash, Wynonna Earp and Coroner to her credit, Madeira landed her breakout role as Moe on the Netflix teen drama Trinkets in late 2018, which has since marked the start of a flourishing international career. Based on the young-adult novel of the same name by Kirsten “Kiwi” Smith, the hit series, which premiered its second and final season last August, follows a trio of high schoolers — Elodie (Brianna Hildebrand), Tabitha (Quintessa Swindell) and Moe — who form an unlikely friendship after meeting at a Shoplifters Anonymous meeting in Portland, Oregon.

For Madeira, the opportunity to co-lead her first major show with Hildebrand and Swindell not only helped to steady her nerves, but also fostered a collaborative work environment that seemed to reverberate at every level of production. “Everyone just came into it with so many ideas regarding their characters and the storylines, and everyone just put so much heart into the project,” she reflects, later adding that the advanced warning of the show’s ending was “such a blessing” in disguise. “Everyone was so warm and inviting, and I think that just being vulnerable with people and being honest at times really allowed us to grow, and they really helped me so much in my confidence as a person and same with playing Moe.”

The opportunity to do Fear Street came while she was filming the first season of Trinkets, when Madeira discovered that the casting director Carmen Cuba was auditioning actors for a trilogy of horror films based on R.L. Stine’s horror series of the same name. And thus began a whirlwind, three-month audition process that began with a self-tape in Portland and ended with a six-hour chemistry read in New York City — with multiple callbacks in between.

Helmed by Leigh Janiak, the Fear Street trilogy follows a group of misfit teenagers who attempt to put an end to a 300-year curse that has been haunting their quaint town. Madeira, in her biggest role to date, leads all three movies as Deena, the loyal and resilient leader who helps her friends escape bloody and gruesome attacks, hunts down dangerous clues, and struggles to keep her budding romantic relationship with Sam (played by Olivia Scott Welch) at bay.

“I love the fact that Fear Street takes these stereotypes that we so often see in horror films and just subverts them completely,” says Madeira, who also plays Sarah Fier in Fear Street Part 3: 1966, the final movie of the trilogy. “The heroes of this story are a group of marginalized people in a town where they’ve always been told that they’re going to receive the short end of the stick, that they’re cursed, that they’re misfits and that they’re seen as others. So, to read three horror films that take those characters and put them at the forefront and make them heroes [instead], I just thought was so groundbreaking and so refreshing.”

At the final stage of the audition process, “there were three actors playing Sam and three actors playing Deena, and we were all in a waiting room together for six hours, and we would just be mixing-and-matching and going in the room to work with Leigh, as well as some of the producers,” Madeira recalls vividly. “But I remember when I went in with Olivia, it felt different. We both left being like, ‘Oh, I don’t want to get too excited, but I think we might book this.’ And then after that chemistry read, I think it took another two weeks, and then we both got the call that we would be traveling to Atlanta in the next three weeks and start filming.”

With Deena and Sam’s relationship being the beating heart of the trilogy, Madeira — who identifies as straight but acknowledges the responsibility of playing a queer character who might be on the chopping block of other horror/slasher films — credits their rapport to the open lines of communication that she established with Scott Welch.

“Working with Olivia was such a dream,” Madeira says. “Even from the chemistry read, we were always checking in with each other, making sure that we would ask each other, ‘Is there anything that you need? Are you comfortable with this? Is there anything you need from me?’ As much as you can have chemistry with someone, if you don’t feel safe exploring that chemistry, it often doesn’t show onscreen, so I love that we had a balance of the two. I think that really made a world of a difference.”

Given that she shot all three films consecutively in the summer of 2019, Madeira notes that her approach was not entirely dissimilar from filming an episodic series. She packed all three scripts in one large Five Star binder to keep track of her contrasting characters. But the biggest difference, she says, was that she had a clear picture of every major plot point in the trilogy, including the more physical scenes that would require more running or stunt choreography, as well as the emotional ups and downs of the entire story.

The Canadian actress also looks back fondly on the collaborative on-set atmosphere that she hopes to emulate in all of her future projects — both on the small and big screens.

“Our steadicam operator and our A cam operator’s name was Nick Müller, and he had so many ideas of ways to add fluidity to the scenes, and I think, when you watch the films, there are so many cool shots, and that’s because everyone felt safe on set to contribute ideas,” she explains. “It was a lot of collaborating, like asking each other: ‘What do you think would work and how are you feeling right now? Do you have any ideas for this?’ I think, when I watch these movies, I just see everyone’s ideas and everyone’s creative minds and hard work come together. I think that’s the thing that makes me most proud about the trilogy.”

Having grown up reading Goosebumps, Stine’s other series of horror fiction novels, Madeira also has a “surreal” memory of her first time meeting with the legendary author, who felt that she was the perfect actress to play Deena. “I didn’t know what to expect from him, but he is so gentle, kind, and kind of quiet. He’s such a peaceful presence, and he was so encouraging,” she reveals. “He just said only nice things to us and really made sure that we knew that he was proud that we were playing these characters. And he just loved everything that we were doing, so that was an incredible experience.”

As a mixed-race person, Madeira says that diverse representation has always been at the top of her mind both personally and professionally, especially as she looks to build on her turn in Netflix’s films.

“Making projects like this and showing [executives], as opposed to just telling them that these projects will succeed, will make a huge difference in the industry,” she says. “I think that will and should help the industry as a whole see that people want to see stories like this. We need diversity onscreen. We need to be moving in that direction, because that’s a reflection of the world that we’re living in today.” 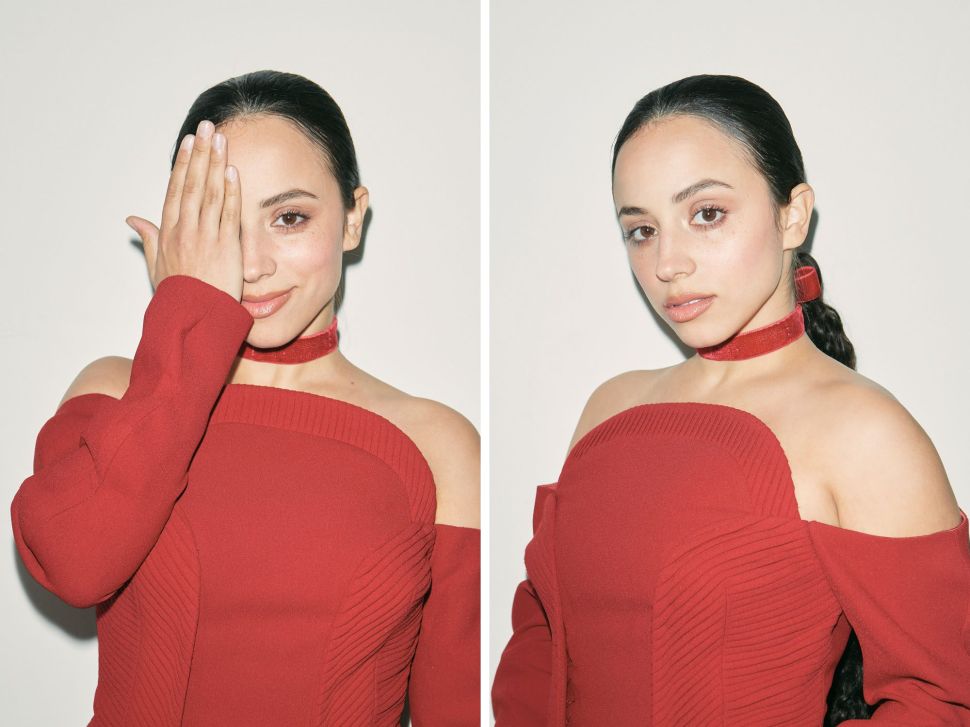