The following post contains spoilers for Loki’s Season 1 finale “For All Time. Always.”

It all felt very Disney. With a kiss and a swell of strings, Loki’s season finale sealed its title character’s redemption arc as he appealed not to chaos but stability, even if stability meant his own free will was a lie. It’s a radical departure from the Loki we’ve followed through the last decade of Marvel movies—a man who responded to a childhood of neglect and disappointment by becoming a literal trickster god, the freest deity in his pantheon.

But faced with a possible war between infinite universes and a threat against the lives of a few people he’s grown close to, Loki is burdened by the weight of responsibility. The arc of Loki bends toward justice, apparently.

Or at least that’s what the show feels like it wants us to believe six episodes in, after seeing time cops kill and blow up worlds, hearing over and over again about obvious “Time Keepers” red herrings and watching a bunch of Lokis betray each other in the penultimate entry. On some level we’re supposed to root for Loki’s latest self-actualization into a hero who sacrifices his desire for control to serve a greater good.

The problem, though, is that the impossible premise of “For All Time. Always.” conflates goodness with the status quo. The choice Loki (Tom Hiddleston) and Sylvie (Sophia Di Martino) are presented with is an impossible one: kill the man behind the curtain and stop erasing entire timelines out of existence, or spare him and risk infinitely multiversal war. Sylvie reasons that it could all be a lie, spurns Loki’s kiss, and kills “He Who Remains,” aka Marvel’s Kang the Conqueror (Jonathan Majors) anyway.

Superhero comics and films are made to deal with impossible quandaries like these, but they’re only worth a damn if their characterization feels consistent. It rings false that Loki, a god whose defining traits are failure and gamesmanship, would learn all his moves have been rigged and not kill the man responsible, or—more likely—deploy some other trickery to undermine either Kang or Sylvie or both in the episode’s final moments. Worse: it forces Loki, a show that’s at least passingly interested in meaningful questions of free will, identity and trauma, to again play the role of table-setter for the MCU’s Phase 4, which will introduce the multiverse itself in subsequent movies.

And instead of evolving our beloved trickster into a new role, either as head of the TVA or as a new “He Who Remains” at the end of time, as pre-ordained by Marvel’s narrative masters, Loki ends the season right back where he was at the start, as an analyst at the TVA. He’s a bit smarter, and he is made sad and heartbroken and lonely from learning a truth that Mobius (Owen Wilson) and Hunter B-15 (Wunmi Mosaku) have been memory-wiped away from, but it feels inert. We’ve seen sad, heartbroken, lonely Loki before; now he’s not even fun.

You could say the same for Sylvie, who began the season as an immiserated agent of vengeance and ends the season that way too. Surely she and Ravonna Renslayer (Gugu Mbatha-Raw) and the rest of this cast will also be back for Season 2, but why and to do what exactly? Fight Kang? No, he’s next appearing in the third Ant-Man movie, so that seems wrong. Battle the whole multiverse? No, that’ll likely be Phase 4’s Endgame-style team-up. Prune more timelines? Been there, done that, still sounds morally sus. The simple answer is that they’ll be back for more because the Marvel Cinematic Universe is at this point a perpetual motion machine of content, where a thing only exists to set up the next thing.

There’s a moment in Episode 5, “Journey Into Mystery,” where amid a chaotic fray between lying Loki variants, Tom Hiddleston’s main character looks exasperated at the deception and selves-sabotage he watches play out. It’s another hint that his Loki was developing more into a hero than the “conniving, craven, pathetic worm” he used to be. But his onscreen weariness feels like a sad admission that the show ran out of ideas to make its trickster clever enough to sustain being a trickster. In the end Loki was just another teaser for more Marvel properties. 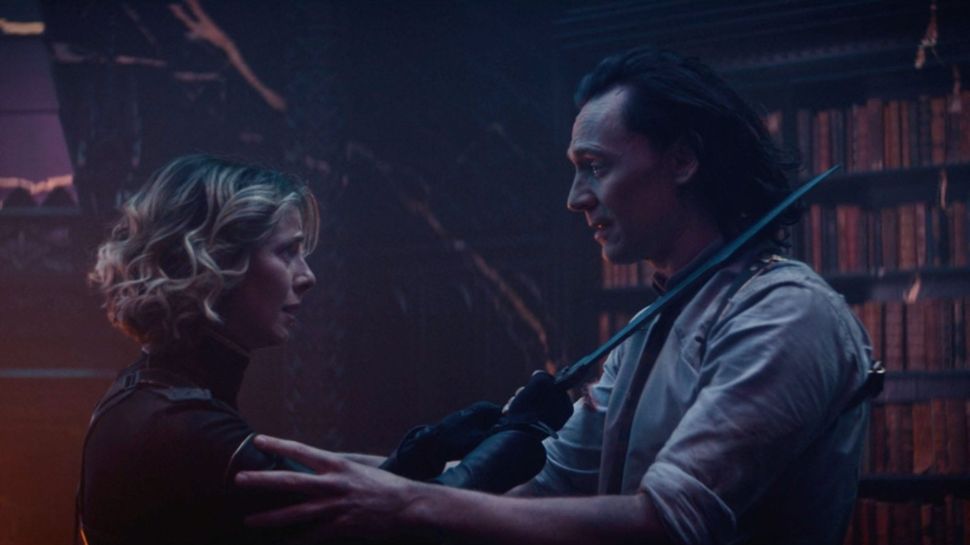