“I am a glass human disappearing in the rain. I am standing among all of you waving my invisible arms and hands. I am shouting my invisible words. I am getting so weary. I am growing so tired.”

— David Wojnarowicz, Memories That Smell Like Gasoline, written a year before the artist died of complications from AIDS.

Between October 1980 and May 1981, five previously healthy young gay men were admitted to three hospitals in Los Angeles with a rare lung infection. On June 5, 1981, the Center for Disease Control (CDC), baffled, published an article at which point two of the five men had already died. The other three succumbed soon after to an “unusual” underlying immunodeficiency. This is the first known reporting of what will later be known as AIDS.

On June 24 of this year, David Zwirner Gallery began a two-part series commemorating the 40th anniversary of the aforementioned report. Titled “More Life,” after a line from the play Angels in America, the exhibition’s first half will run at three of Zwirner’s New York locations until August 3 and features work from director Derek Jarman (1942-1994), photographer Mark Morrisroe (1959-1989), filmmaker Marlon Riggs (1957-1994) and the activist group Silence = Death. In September, the second half of the show, which is not part of this review, will commence in New York and London.

These artists aren’t—excuse the crassness—the marquee names of AIDS. It’s likely you’re more familiar with Keith Haring, Robert Mapplethorpe, Peter Hujar, Felix Gonzalez-Torres, and Wojnarowicz. As Zwirner Director Thor Shannon told Observer over a Zoom call: “We wanted, very much by design, to focus on artists who deserve more life being brought to their legacy and their careers and to be re-examined, recontextualized, understood. That was very much the goal, I would say, for this series of exhibitions.”

A month after the initial 1981 CDC report, the agency published another report on July 3, which prompted the New York Times to run a now infamous headline the same day, which reads, “Rare Cancer Seen in 41 Homosexuals.” The AIDS crisis had begun and misinformation is rampant. In October 1982, President Ronald Reagan’s Deputy Press Secretary Larry Speakes was asked for a comment on “A-I-D-S.” The disease, at this point, had killed 853 people in the U.S. “I don’t have it. Do you?” Speakes joked. The press pool laughed. Three years passed before President Reagan mentioned the word AIDS in public.

This background is vital to understand the anger and despondency felt by a generation of gay men, including those whose work composes the often illuminating materials on display.

In a harrowing clip of Larry Kramer on a 1983 Today Show spot, the activist and playwright asks host Jane Pauley, “[C]an you imagine what it must be like if you had lost 20 of your friends in the last 18 months?”

On several occasions in Jarman’s 1993 film Blue (playing at Zwirner’s Chelsea location), the artist intones in his whispered British accent the names of lovers and friends who have succumbed to AIDS. “My heart’s memory turns to you, David, Howard, Graham, Terry, Paul,” he says and then repeats those he lost like a mantra. You are enveloped by Jarman’s voice—your hearing heightened by a lack of imagery: the screen, for the duration of the film (79 minutes), is saturated by International Klein Blue and nothing else but his poetics and philosophical musings.

It’s meditative (the title rendered literal), but it’s more than a stylistic quirk. While making the film, his last, Jarman was dying. His eyesight was failing and, as a result of a damaged retina, he would occasionally see flashes of blue light in his vision. It’s unlikely you’ll park your ass on the Zwirner bench for the full hour and 19 minutes, but unlike the other film being screened—Riggs’ 1989 Tongues Untied—the viewer benefits from screening it front to back.

July 1985, actor Rock Hudson became the first U.S. celebrity to announce a positive AIDS diagnosis. Later, Reagan denied his request to seek a special treatment in France, though stories about the disease more than tripled in major print outlets over the next six months. In August, Ryan White, an Indiana teen who contracted the virus from a blood transfusion, was refused a seat in his middle school’s classroom. Perceptions were still colored by discrimination. A December 1985 poll by the Los Angeles Times found, “more than half of the adults in the nation support quarantining AIDS patients.” Compassion—like a cure— was out of reach. The year was the most deadly on record with more people being diagnosed than all previous years combined.

Morrisroe tested positive for HIV in 1986, likewise Jarman. Then Riggs, in 1988, while working on Tongues Untied. At the converted townhouse on 69th Street, next to the Dolce & Gabbana on Madison, Morrisroe’s photographs hang above two inactive hearths and on white walls. One, called Sky (1986), is a tie-dye white-and-blue image that could be a marginally more titillating image from Jarman’s work. Morrisroe, who cut his teeth in Boston working alongside Nan Goldin and David Armstrong, documented his friends and lovers in intimate portraits.

As a teenage hustler, Morrisroe was shot by one of his johns and for the rest of his life he walked with a limp. After his diagnosis, he shifted his focus back to his own body and in the hospital, he converted the lavatory into a dark room. One of “More Life”’s few misses is not including his bodily self-portraits, featuring his X-rayed lungs, in sleazy hues of blue and purple, failing due to pneumonia.

On February 4, 1987, pianist Liberace died of complications due to AIDS. His doctor, to protect him against stigma, listed the cause as a heart attack. March 12, the AIDS Coalition to Unleash Power (ACT-UP) was founded; as a result of its direct action grassroots campaigns, it shifted the tide in research and protections for people with AIDS.

Bodily decay, rage, shame, and the ramifications of silence are motifs throughout the varied offerings in the show. Jarman exudes self-loathing in his Ab-Ex painting across which he’s scrawled, Arse Injected Death Syndrome, an alternative definition for the acronym AIDS. Marlon Riggs’ brilliant avant-garde documentary, Tongues Untied, confronts the ways Black gay men are discriminated against by Blacks and whites alike, and how that affects their understanding of self. (Answer: negatively.) The film experienced fierce backlash when first aired on PBS.

Visually, it’s a spliced together montage of queer snapping semiotics, anecdotes about homophobia, spoken-word poetry, and footage of voguing featuring Willi Ninja (1961-2006, cause of death: AIDS complications) a year before Paris is Burning (1990) hit theaters. Its sensibility is reminiscent of director Errol Morris, although it can only be described as entirely unique. Its influence can be felt in The Watermelon Woman (1996) and Arthur Jaffa’s moving, “Love is the Message, the Message is Death” (2016).

Not speaking out, Riggs postulates, is a form of suicide. In a voiceover he asks, “What legacy is to be found in silence? How many lives lost?”

This question is answered by the collective Silence = Death. (A T-shirt featuring the pink triangle logo appears in Riggs’ doc.) This part of the exhibition is more printed materials housed in vitrine than art. It’s the part of “More Life” that educates the most but does the least. It appears to preemptively push back against the question, “What? You guys didn’t think to include any women?” But the result doesn’t lead to any contemplation. You’ll get as much, if not more, out of looking at the comprehensive page on Zwirner’s site as you will staring into the glass cases and reading the printed-out labels. Silence = Death co-founder Avram Finkelstein said, “The poster comes for you in ways art simply can’t.” As a public service announcement, yes. But as a grander part of the thematics, no. To whom does this section offer more life?

Another question I wondered was: Why no work from living artists with AIDS? Thor Shannon reassured me it had been considered, but that the show focuses on a certain period in history. The show only covers so much. But why set that limitation by design? While annual infection rates in the U.S. have been reduced by more than two-thirds since the height of the epidemic in the mid-1980s, East and Southern Africa, the regions most affected by HIV in the world, are home to 20.7 million people living with HIV, a majority of whom are women and girls. The AIDS epidemic is still ongoing. There’s a tendency to see 1997, the tipping point of when deaths began to decline, but there are still 1.2 million people in the U.S. living with HIV / AIDS.

The arts organization Visual AIDS—which Zwirner is partnering with to sell prints of the Silence = Death poster, which benefit the org—has a comprehensive list of artists living with HIV / AIDS. “More Life” might be able to give a better life to the living, but the show does a lot right. It’s curation of lesser known artists serves as a timely reevaluation of a crop of challenging works with renewed relevancy; its content bold and unapologetic. 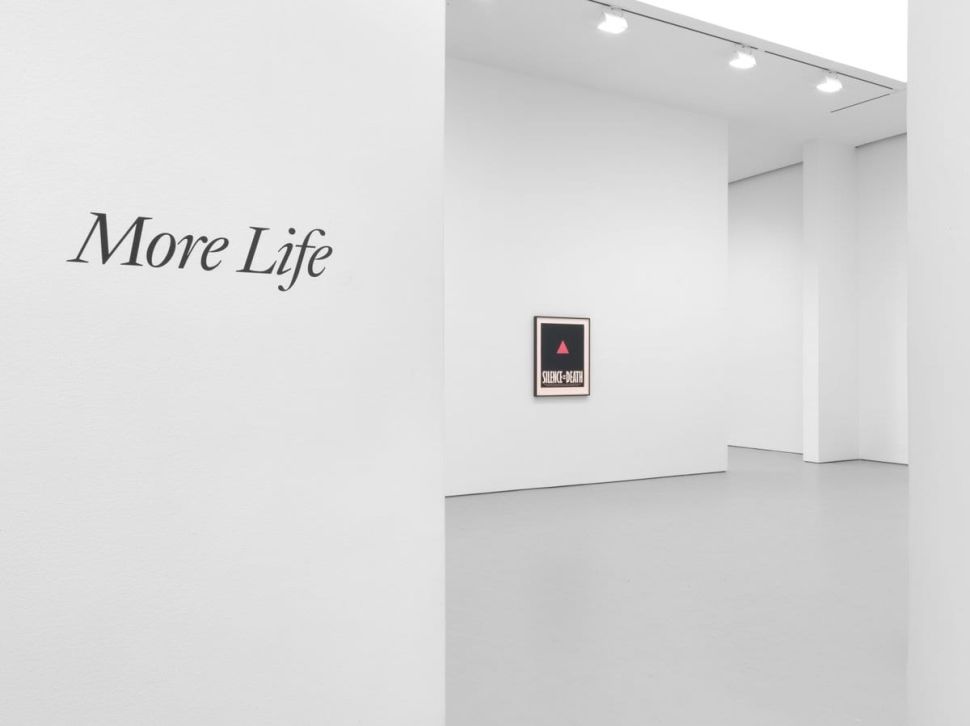