Reviewing Old, the latest dreadful hokum from M. Night Shyamalan, one critic called it “pure chaos.” That just about says it all. He’s the writer-director who makes loopy sci-fi and supernatural thrillers lazily lacking in thrills, not to mention coherence, and ranging from the merely bad (The Sixth Sense, Signs) to the downright despicable. (Does anyone remember The Lady in the ?) This time he goes one step further with a one-joke premise that lasts close to two hours, going nowhere and signifying nothing. Old is asinine.

The premise: a Philadelphia couple named Guy (Gael Garcia Bernal) and wife Prisca (Vicky Kriegs), accompanied by their two kids, all in need of a vacation, answer an ad on the internet for an island paradise that lives up to its reputation on the first day with everything from welcoming cocktails to rolling surf. Things turn dark when they join a group of fellow tourists for a trip to a secluded beach nearby. Their fellow vacationers include an insane, knife-wielding doctor (Rufus Sewell) with an obsession for Marlon Brando, a nutty psychotherapist, a male nurse and a star rapper with no visible talent called Mid-Sized Sedan. The island has an immediate impact on the group that begins with nose bleeds, migraines and blackouts, and heightens when the corpse of an ancient crone who has aged for at least a century since morning washes up on the beach. None of the terrified visitors can call for help because their cell phones are dead and there’s no way back to the resort.

Before you can say “time travel is a bore” everyone starts aging. The doctor opens up Prisca with a pocket knife and removes a tumor the size of a basketball and the incision closes and the scar disappears on its own. Body cells age in minutes. Half an hour is the equivalent of several years. An adolescent returns from a swim eight months pregnant. No explanation, just laughable dialogue written by director Shyamalan like: “Something is going on with time on this beach.” I’ll say. And time is something that threatens never to end.

One by one, they all age, wither, agonize and die. The first half of Old is devoted to furrowed brows as each and every character quizzically asks “What’s happening?” The second half concentrates on time-wasting plot mechanics instead of relevance as skin wrinkles, children grow beards and an epidemic of epileptic fits becomes the order of the day replete with foaming at the mouth and inherent bleeding. None of it makes any sense, and it’s not interesting or suspenseful enough to invest much time trying to care what happens next. But it drags on incessantly while the actors spout goofy lines like “We just got three hours older while you touched my face” and everything ages except the plot, getting sillier by the minute. It’s so preposterous you risk the loss of a few I.Q. points just struggling to figure it out. When you realize in Shyamalan’s last-minute overwritten attempt to explain that the group on the beach is part of a medical experiment to study the aging process, observed, directed and photographed by a hidden camera held by Shyamalan himself from a glass-walled observatory run by Big Pharma, you might want to throw something at the screen.

I liked the toxic beach (the film was shot in the Dominican Republic), and I admire the aging process illustrated by the makeup department, but when the best thing about a movie is the makeup, you know something is missing that can never be recaptured. 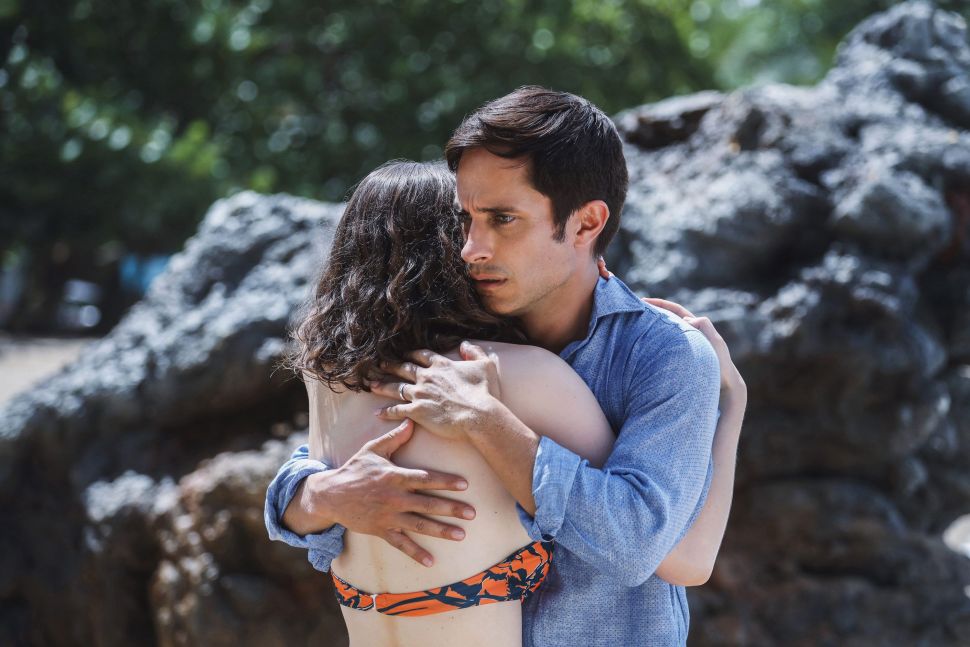