Yesterday, England lost to Italy in the Euro 2020 final, and there were almost instantaneous racist attacks online aimed at three of England’s players (Bukayo Saka, Jadon Sancho and Marcus Rashford) who missed penalties in the shoot-out. Prince William, who is president of the Football Association, spoke out and immediately condemned the horrifying, racially-charged online abuse of the three Black soccer players.

The Duke of Cambridge issued a rare personal tweet, in which he wrote, “I am sickened by the racist abuse aimed at England players after last night’s match. It is totally unacceptable that players have to endure this abhorrent behaviour. It must stop now and all those involved should be held accountable. W.”

I am sickened by the racist abuse aimed at England players after last night’s match.

It is totally unacceptable that players have to endure this abhorrent behaviour.

It must stop now and all those involved should be held accountable. W

The Football Association also released a statement. “The FA strongly condemns all forms of discrimination and is appalled by the online racism that has been aimed at some of our England players on social media. We could not be clearer that anyone behind such disgusting behaviour is not welcome in following the team. We will do all we can to support the players affected while urging the toughest punishments possible for anyone responsible.”

This isn’t the first time Prince William has spoken out about racially charged vitriol within the sport, as after hearing that there was a police investigation into racist remarks aimed at Manchester United players earlier this year, the Duke of Cambridge denounced the racist abuse in a series of tweets.

He wrote, “Racist abuse—whether on the pitch, in the stands, or on social media—is despicable and it must stop now. We all have a responsibility to create an environment where such abuse is not tolerated, and those who choose to spread hate and division are held accountable for their actions. That responsibility extends to the platforms where so much of this activity now takes place.”

He added, “I commend all those players, supporters, clubs and organisations who continue to call out and condemn this abuse in the strongest terms. —W.” Prince William also participated in a U.K.-wide boycott of social media at the time, in order to raise awareness and encourage social media companies to take action against racist abuse online.

Prince William and Kate Middleton were both in attendance at the 2020 UEFA European Football Championship yesterday, and they brought along seven-year-old Prince George, who is already an avid soccer—sorry, football!—fan. The Cambridges were were spotted enthusiastically cheering after England scored an early goal, and Prince George excitedly hugged both his parents. The family looked less thrilled after England’s eventual defeat, and Prince George’s facial expressions at the game just might rival Duchess Kate’s own famously candid faces at Wimbledon. 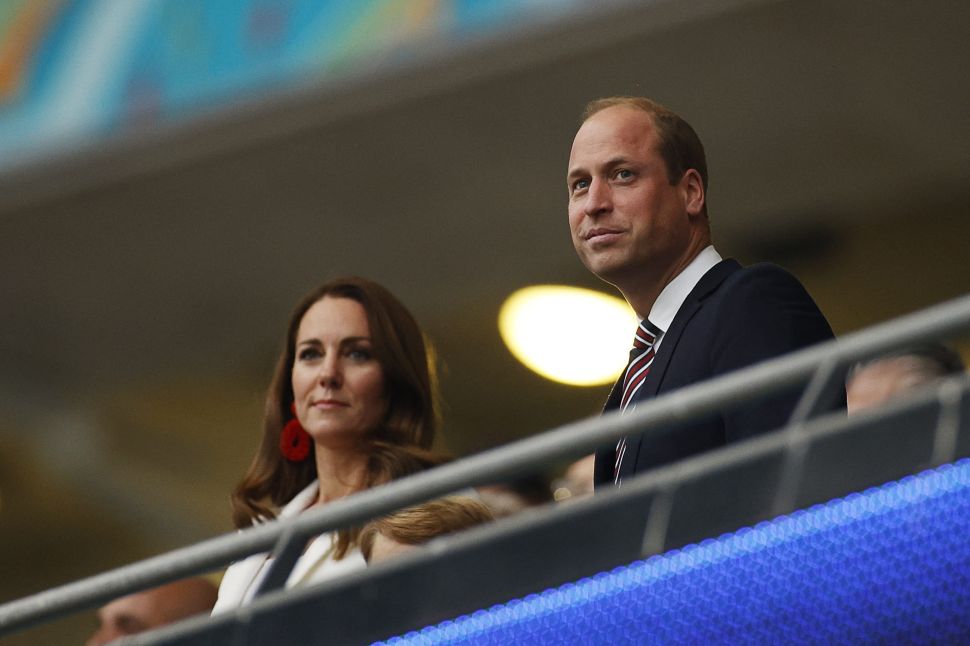