An old school sensibility permeates Stillwater, the new Matt Damon-led film from Spotlight director Tom McCarthy. Certain trailers and TV spots have sold the movie as an Amanda Knox thriller parallel sprinkled with Taken elements as Damon’s Bill Baker attempts to prove his incarnated daughter’s innocence. But really, the movie is a redemption story and a family drama. It’s more soft spoken and, well, still than some might expect.

The star vehicle for Damon is deliberately understated. Whereas Spotlight was a painstakingly detailed procedural following a procession of case developments, Stillwater is something of its inverse. The sentiment of our protagonist’s life takes priority over the investigative details. In a conversation with Observer, McCarthy opened up about using Damon’s public hero persona to challenge the audience in their creation of Bill Baker and how the film, which arrives in theaters July 30, came to be.

Observer: Can you tell me where Stillwater originated and how it initially came to your attention?

Tom McCarthy: I would say it was like I used inspiration beyond intention. Many, many years ago — 10, 12 years ago now — following that Amanda Knox case, I thought it was a fascinatingly tragic case. But what really struck me was this idea of a relationship, or the situation of the young woman being in prison, and I started thinking, Wow, what’s the story around that? There was enough written and said about that story. I didn’t want to address that in any real way, but I was really loving the idea, or just fascinated by the idea is a better way of saying this, of a young American woman being in prison abroad for a crime she may or may not have committed. And then I quickly started focusing on the relationship between her and her father, which was fictionalized. This strange relationship between father-daughter in this extraordinary setting. What a great jumping-off point for a story.

How did you go about casting a movie like this? The public doesn’t necessarily associate Matt Damon as this rural Oklahoman. I’m curious what qualities you were looking for that specifically breathes life into the vision you have for the film?

The essential thing was when audiences look at Matt Damon, they think: What? He’s kind of like a quintessential American hero, right? He always has that integrity and that kind of sense of know-how and get-it-done that we associate with heroes, specifically cinematically, right? Jason Bourne may not know who he is, but he always knows exactly what he’s doing and where he’s going and how to get it done. We wanted to play on that.

We wanted to start there, knowing audiences were going to take it in. So, when you see Bill Baker in the projects jumped by six kids, you’re like, “Oh, he’s going to unload,” and what happens? What normally happens when any guy is taken on by six other guys? He gets the shit beaten out of him, right? So, that’s inevitable; he gets a few good punches in because he’s a roughneck and those guys know how to fight and they’re tough as shit and strong as shit. But it’s reality.

We’re dealing with reality here, not a movie.

We’re dealing with reality here, not a movie. So, we were trying to be authentic to that and subvert that. So really, it started there. We need that element in our lead actor, the list is very small suddenly of guys that audiences will show up and be like, “Oh man, this guy’s going to win — he’s the man, let’s see where he goes,” and then let’s challenge that. And let’s force an audience to consider the consequences of that man’s actions. Both personally and in terms of the people around him and even sort of globally, that’s what we were interested in discussing.

Sticking with casting, 8-year-old Lilou Siauvaud is an absolute standout as Maya as Bill’s surrogate daughter of sorts. Was that role hard to cast and what separated her from the pack?

Her talent separated her from the pack, quite frankly. Yes, it was very hard to cast. When you say “I need an 8-year-old French girl for a role,” the bench isn’t that deep. And that said, I was surprised at how many wonderful French actresses of that age came in; it was an adorable process. We saw some really good girls for the role, and then I got a call from my casting director down in Marseille and she was like, “You’ve got to get down here. I just saw this girl.” And I was in Paris working with the writers, and she said, “She’s incredible.” And I said, “Why?” She goes, “I don’t know why. She’s never acted a day in her life, she lives about an hour from Marseilles, and her dance teacher sent her in,” but, you know, I went in and there was Lilou, and yeah, she just…with kids and casting, man, there’s a little bit of magic there, you know. It’s sort of like you’re always looking for the needle in the haystack.

Stand-up comics are fond of saying there’s truth in every joke. I was surprised by the amount of humor in Stillwater, which is otherwise an emotional family drama. I was wondering what your mental math is when designing a movie like this that still possess moments of levity?

When I first approached [co-writers] Thomas Bidegain and Noé Debré with this original script, it was a very awkward and dry meeting where they were very critical of the script, which I agreed with. There was a very sort of sobering diagnosis, or diagnostic, of what was wrong with it and what they thought they’d redo, and I thought, Oh, boy, these guys are going to be really dry, really critical Frenchmen. So I literally got on the plane, flew to Paris and spent a week with them at Thomas’s apartment, and they were the most charming, funny guys. We laughed so hard, and that’s really important to me. The process needs to have humor, needs to be joyful — the work is hard; you need to find that in the work, right? I believe that in all work.

It is a really intense, suspenseful and slow-burn, gripping drama. It’s got that thing where you’re just waiting for the other shoe to drop a lot of the time. I think finding those moments of humor just give audiences a moment to not only breathe but connect in a deeper way with the characters.

You’ve previously said that you learned from every movie you make. What has been your major takeaway from Stillwater?

Well, it’s a story that still needs to be written. We’re just sharing it with audiences now, so I’ll know more once audiences are seeing it. But I could tell you, what was really exciting about that screening in Cannes was regardless of the reception at the end and the ovation and all that stuff that’s been written about it, was just sitting in a French audience as an American director who directed a movie primarily in French in France and watching them really embrace the movie and laugh and be surprised and react and really, really feeling that.

What we were trying to do with this movie is allow the story to go where the story wanted to go and not feel constrained by preconceived notions of what a story or a genre should be. If we had a central character in a story that was compelling enough, would an audience go on that journey with us? I feel like just from that one screening alone, I was like, to me, the answer is “Yes.” Will it work for everyone? Probably not, they never do. But that’s really exciting to me, because I think we need to sort of be challenging form right now in movies, right? Otherwise, it’s going to get stale, and we need to be, like, challenging audiences and hopefully, audiences will support movies like this.

This interview has been slightly edited and condensed for clarity. 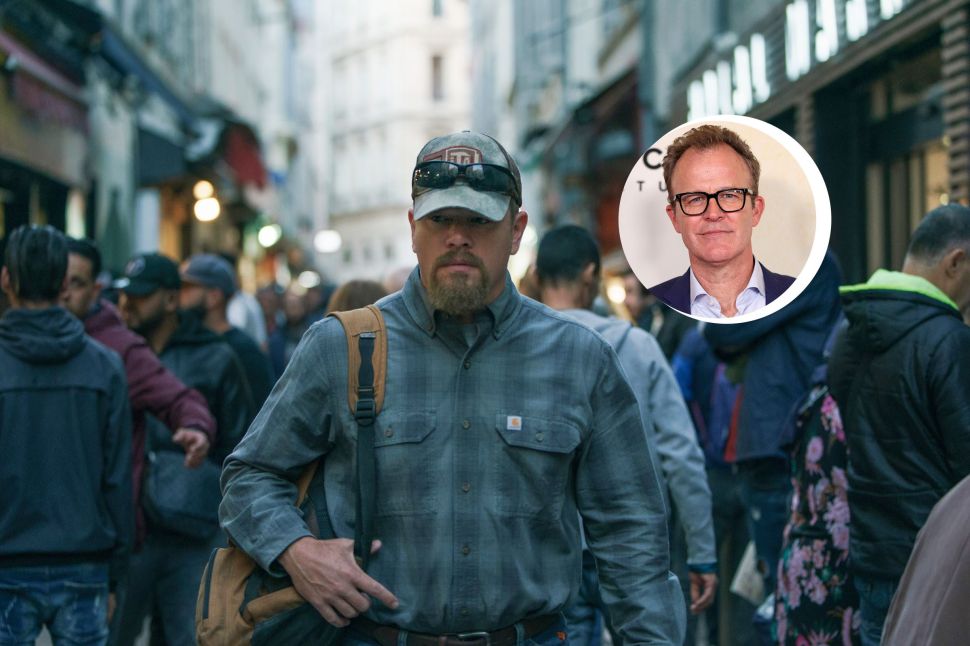