In Martin Roth’s posthumous solo installation in the abandoned building of Newburgh’s former City Club, one is invited to hear the symphony of plants. Brought to life by local non-profit arts organization Strongroom since the untimely passing of the Austrian-born artist in 2019, the art show reimagines a crumbling space where nature takes over.

The building, the result of a collaboration between Andrew Jackson Downing and Calvert Vaux in 1852 was originally named the Culbert House for the intended owner, William Culbert, a doctor of medicine. Downing, a Newburgh-native and proponent of the Gothic Revival movement, is best known for his significant influence over landscape architecture and his contribution to shaping New York City’s Central Park.

The house was later sold to be used for the City Club and hosted a district law library. A fire, perhaps intentional, engulfed the building in 1981 as supporters of renovation and demolition camps had opposed for decades on the fate of the historical site. Upon entering today’s ruin, one can imagine the original floor map—a corridor, chambers, the library, a drawing room—and overlay this with the lush luminescence of Martin Roth’s garden.

Roth wanted to reclaim a space which residents saw as a local eye-sore to “emphasize the beauty in nature” in the form of a public park which could also lend to a plant concert venue. In an ironic nod to its designer he said, “It will be as Downing stated, ‘a home with a garden,’” albeit not exactly the polished version Downing had in mind. The delineation between wild and tame is often tenuous and always subjective, and Roth champions de-domestication: nature doesn’t need to satisfy urban exigencies. It is enough, in and of itself.

Roth, whose artwork has been shown in Austria, Germany, the United States, Mexico and China, previously experimented with plant-based performances, for instance corn in 2015 which offered an interactive play between visual art, sound and touch, and in 2013 creating a multi-species soundscape (which included aquatic, avian, amphibian and plant recordings) for a bonsai.

His interaction with the botanical and animal worlds, culture and politics is best crystallized in his 2017 artwork displayed at the yours, mines & ours gallery in the Lower East Side, In November 2017 I collected a plant from the garden of a mass shooter. Roth travelled to the Nevada home of Stephen Paddock, the Las Vegas shooter who killed 58 people in October 2017, and found in his decrepit garden a desert holly plant peeking through gravel. The plant, which possesses traditional healing and drought-resistance properties, becomes for the artist a hyperbolic and absurd antidote to anti-gun violence. Roth reconstructed the carpet from the room Paddock used to kill his victims from and where he eventually committed suicide in, and featured the collected desert plant. In 2017, Roth also planted 200 scent-filled lavender plants in a New York City Midtown basement. Tweets from Donald J. Trump and his most prominent MAGA backers were used to control lighting, hence photosynthesis, over the relaxing field which created a paradoxical atmosphere of a desirable escape and uncanniness.

According to Strongroom, which remembers the artist and introduces the artwork, Roth’s vision for Newburgh’s City Club was to create “two parallel realities: as the site of the former City Club, but also as the home of this illusionary public garden.” He had added then, “if you change reality just a little bit, everything changes.”

I visited the installation not too long after tropical storm Elsa battered New York with heavy rains. Kelly Schroer, founder of Strongroom, who carried out Roth’s plans and welcomed visitors on opening day, told Observer that “Some plants fared better than others.” I entered what is left of the City Club’s structure, across from the Greek Revival-styled Dutch Reformed Church, to discover a humid ecosystem, a roofless greenhouse guarded by 19th-century opulence. I strolled along the inner winding path. Komorebi—a Japanese word which describes the mesmerizing phenomenon of sun streaks permeating through trees and leaves—mixed with the chords of a botanical realm composed of trees, shrubs and colorful flowers. Roth used a process of bio-sonification which channels the frequencies plants emit into music, made technologically-possible with biofeedback (which you can now use on your smartphone).

This is not a new idea. Pythagoras, the 6th-century BCE mathematician famous for the namesake theorem you may recall from school, thought that our universe produced music. He considered the movement of the Sun and planets, including ours, to produce specific melodious, celestial sounds (tones, semi tones) inaudible to human ears, which, together, generate a “harmony of the spheres”—a musical cosmos. One could have fantasized about the eventuality of a new exo-language. NASA discovered evidence of this recently, recording radio emissions from space later transformed into sound-waves.

Overgrown, the former City Club is a Romantic dream. It feels like stepping in the 18th and 19th-century ruin paintings of Canaletto, William Turner or Hubert Robert. Leaning towards familiar melancholy, I could imagine French writer Chateaubriand’s sensation standing in the Colosseum apprehending the decrepitude of the world. At that time, the Roman monument was a derelict site of abundant greenery unlike its groomed appearance today. This came to my mind because ruins, wherever they may be located, mundane or with a world heritage pedigree, shake us off-balance and exude an emotional spell.

Necessary memento mori (“remember that you will die”) more than bad omens, ruins are a testament of existence, an object of reflection and a reminder of human frailty. They offer a physical expression of what has disappeared, of the invisible—when the past becomes present and the dead pushes to live on— and capture an allure for the mystical. Besides the building, which evokes the memory of Downing, Vaux, and Culbert, the plants are the germinated seeds from Roth’s exceptional creative vision and one can’t help but wish he could have seen its accomplishment.

While in Newburgh, one can come across over 700 abandoned buildings open for imagination—from an imposing Masonic Temple on Grand Street to be turned into a hotel to individual houses scattered across town. Only sixty miles north of New York City in Orange County, the historical town has a rugged and laid-back charm, a breeze from the Beacon weekend crowds swarming the other side of the Hudson River. An outdoors exhibition against the wall of the Ritz Theater on Broadway and Liberty Street curates beautiful photo portraits of Dmitri Kasterine who documented faces of Newburgh between 1995 and 2011, now published in Newburgh: Portrait of a City.

Following a successful Kickstarter campaign, Strongroom will organize a series of talks through summer with historians and botanists to embrace the art installation as part of a community-led conversation on the place of nature, history and arts (the garden will stay open until October). Strongroom is also considering a hybrid, symbiotic evening concert of humans and plants—a chloro-fix or chloro-feel promise of rare bliss not to be missed. 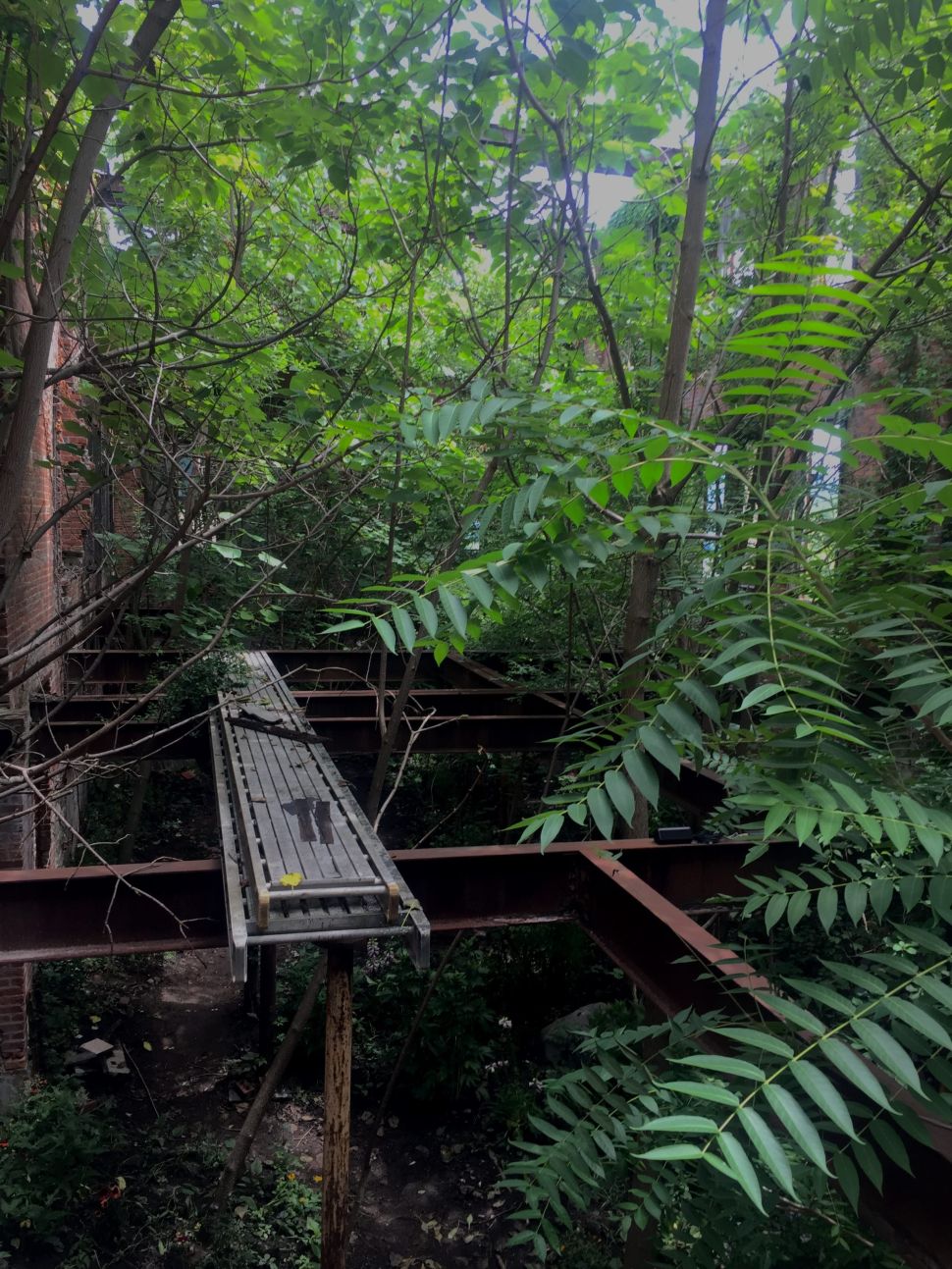