On July 21, Actors’ Equity announced its Open Access membership policy which grants membership to any theatre worker with any experience in acting or stage managing in the United States. Previously, an Equity Card was exclusively granted to those working for an Equity employer, by acquiring points through the Equity Candidate Program, or by joining a sibling union.

According to the union’s press statement, this decision was made as the result of an internal democratic process to make Equity a more diverse and equitable organization. The prior system, according to union leadership, was too exclusionary, with employers deciding who got in and who was left out. Bear Bellinger, Central Principal Counselor and Open Access Action Team Leader states in a piece on the union’s website, “We are removing the ability for employers to pick and choose who deserves fair protections under a union contract. Most importantly, we are doing so in a way that will allow us to move forward together with a more informed and activated membership.”

This decision comes in the context of over half a decade of internal organizational changes inside the union. Groundswell movements to make Equity a more just and diverse union have been ongoing since at least 2013. These include efforts to create wage justice in off-Broadway theatres through the #fairwageonstage movement in 2016, the hiring of a Director of Diversity in 2017, and the completion of two diversity and inclusion studies—the first released in 2017 and the second in 2020. In both these studies, data showed that a majority of high paying leading roles went to white men and that professional theatre overall skewed disproportionately white and male. Producers and directors, the studies show, make racist and sexist hiring decisions and these decisions determine who gets to be a member of the union. Open Access is part of an effort to #changethestage and make Equity into an anti-racist union. It does so by lowering the barrier to entry for non-union actors who were previously unable to access Equity jobs due to systemic racism and sexism.

Under the old membership system, the acquisition of Equity points was seen as a rite of passage for young actors. Getting your card meant, in a sense, that you had made it in the industry. You were now a professional and could get bigger roles and make better money. AEA had previously structured itself as a union of highly skilled craftspeople whom producers and directors were allowed to access by paying the higher union wages. Throughout the performing arts, however, ‘skill’ can be highly subjective. Additionally, given the vast numbers of non-equity performers accessible to non-equity shows, producers can easily cast a show non-equity without losing in revenue. Regional and traveling shows are very frequently non-equity and there is rarely any shortage of performers available to work off the card.

Actors have access to better jobs at higher wages with an Equity card; however, membership is not a guarantee of work. Sometimes, it means just the opposite. Performance artist Siobhan O’Loughlin, who spent eleven years as an actor in New York City and is not a member of AEA, decided not to continue taking steps to join the union when she noticed how rare the opportunities were for Equity actors in an already tough industry.

She told Observer, “What I saw was not people happily working in competent conditions where they’re happy successful actors. I saw people leaving New York City because they could not get the Broadway role and the Broadway role is really what’s left to you. There are very few opportunities for actors and Equity unfortunately limits those opportunities even more.”

The pandemic has made those rare opportunities rarer still. The change in the membership rules can also be seen in the broader context of the pandemic and the devastation it has wrought on the performing arts since live theatre was shut down in March of 2020. (Even pre-pandemic, of AEA’s over 51,000 members, only around 40 percent were able to find any work at all contracted through the union in a given year, and much of that work was short term.) Although a deal has been reached to reopen theatres in the fall, the union has suffered dire financial setbacks and members have received cuts to their health insurance benefits. AEA appears unlikely to recover financially from the shutdown anytime soon.

With the future of live theatre still uncertain, the decision to join Equity and cut yourself off from non-union shows is a difficult one. Brady Dalton Richards, an actor and Equity member, was cast as Scorpius Malfoy in Harry Potter and the Cursed Child on Broadway just prior to the pandemic. He told Observer, “I joined and at that point in rehearsal we did not even have enough weeks logged for myself to qualify for the healthcare. At that point I had locked myself into paying dues and I had locked myself out of non-equity productions which at this point had been my entire bread and butter as a career actor.”

Open Access could potentially grow the number of Equity members, bringing more dues into the union and giving the union greater leverage in negotiating contracts and bringing more shows under its umbrella. This is an attempt by Equity to move from the craft union model of exclusive skilled labor to the industrial union model, in which workers of all skill levels organize together for greater leverage. In a hospital that is unionized under the industrial system nurses organize with janitors to strengthen the union and create better wages and working conditions for all. Through Open Access, Equity members of all experience levels are now able to join the union, potentially allowing AEA to organize both shows made up of very green actors right out of college, alongside Broadway shows cast with more seasoned actors.

A vocal number of performing artists on social media aren’t thrilled about the change. They fear that it will increase the number of people auditioning for Equity shows without increasing the number of Equity shows. Many see it as a dues-grab by a union that has been losing money for nearly two years. They worry that it will merely result in a union made up of a more diverse pool of unemployed actors. The change, after all, does not take casting decisions out of the hands of racist producers and directors—although it does have the potential to diversify the pool of talent those producers and directors see by lowering barriers to access. This change will, hopefully, in combination with other diversity initiatives by the union, result in a broader, more multi-racial and anti-racist union. However, the justness of the new policy will be proven out by the organizing the union is able to do as a result of the hoped-for new membership base. To satisfy an anxious and more-than-usually unemployed membership, the increase in dues-paying members will also need to lead to an increase in work. 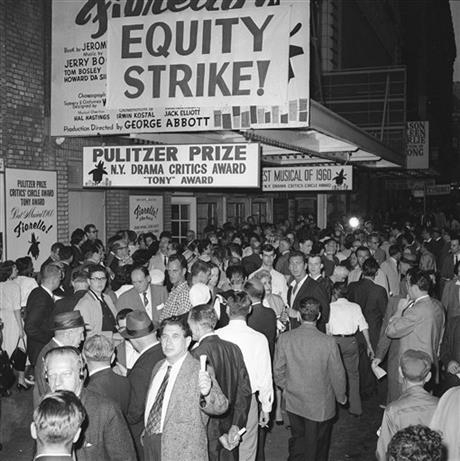