“Where did all the happy endings go? Where can all the good times be?”

For those stuck in “The Age of Not Believing,” Bedknobs and Broomsticks on Disney+ is a great place to find some magic. Turning 50 this year, the cult classic falls into a niche category of family films that aren’t exactly AAA movies, but are fiercely beloved nonetheless thanks to their ubiquity at after-school programs and grandparents’ houses. (The Pagemaster and Ferngully, we see you.) For half a century, viewers have been captivated by Miss Eglantine Price (Angela Lansbury), her mangy black cat Cosmic Creepers, and her rickety four-poster that can travel anywhere in the world with the tap and twist of a bedknob. In a 2018 interview with Australia’s Studio 10, then-92-year-old Lansbury spoke to the film’s lasting appeal: “There are children who watch that movie over, and over, and over again.” At 50, the zany feature is just as enchanting as it was in 1971 and more radical than some may remember.

In the early 1960s when negotiations to turn Mary Poppins (1964) into a movie stalled, Disney began development on Bedknobs and Broomsticks, also an adaptation of a book series by a female author (in this case Mary Norton, best known for writing The Borrowers), which centers on young children and their witchy caretaker, with music by The Sherman Brothers. Due to the similarities between the stories, Bedknobs and Broomsticks was repeatedly shelved after the film rights to Mary Poppins were secured and the movie was released.

The musical finally saw the light of day over 25 years after Walt Disney first purchased the movie rights to Norton’s book, but not without cast shakeups. Julie Andrews was offered the role of Miss Price, but turned it down for fear of being typecast after Mary Poppins. When she eventually changed her mind, Lansbury had already accepted the role.

Although Bedknobs and Broomsticks has never escaped the shadow of the Julie Andrews-helmed blockbuster, the off-kilter comedy adventure has a distinct charm and wonderfully chaotic plot. Set in a small village in South West England during the Blitz in 1940, the film begins when reclusive spinster Miss Price takes in three orphans from London: Charlie, Carrie, and Paul Rawlins (Ian Weighill, Cindy O’Callaghan, and Roy Snart). Unbeknownst to them, their reluctant guardian is a witch. To be more specific, she’s an apprentice witch learning magic through a correspondence school in the hopes of using her power to fight for the UK in WWII. The children plan to escape back to London, but when they catch Miss Price riding a broomstick, they decide to stay (after blackmailing her for money and sweets). Together, the four set off to locate Professor Emelius Browne (David Tomlinson, in a much wackier role than George Banks in Mary Poppins), who closed down the Correspondence College of Witchcraft due to the war. When they find him, they discover he’s a street magician and con man who never expected the incantations he found in an old book to actually work.

From there, the fivesome embark on an adventure to find the last spell Miss Price needs to complete her magical education. Along the way, the group dance through Portobello Road, visit the bottom of the ocean (featuring the song “The Beautiful Briny,” which was originally written for Mary Poppins), play soccer with animated animals, and… punch Nazis.

Bedknobs and Broomsticks is just as unhinged as it sounds. The 1960s through the 1980s was a period of decline for Disney, and the internal drama at the studio plus the Mary Poppins-related delays are evident in Bedknobs and Broomsticks, a film that’s all over the place (ironic, as Lansbury called her performance “acting by the numbers;” each scene was storyboarded ahead of time). At first, it strikes the same chord as Chitty Chitty Chitty Bang Bang (1968), but then it veers into West Side Story (1961) territory with extended dance numbers (including dancers in brownface). The scenes where the group travels using Miss Price’s magical bed are bizarrely psychedelic à la the tunnel scene in Willie Wonka and the Chocolate Factory, which premiered the same year. And the arcs featuring a mix of live action and animation, particularly the soccer scene on the cartoon island of Naboombu, feel like precursors to future hits like Space Jam (1996).

Despite being a bit of a hodgepodge — cartoon fish in top hats existing in the same movie as literal Nazis will give your head a whirl — the film earned an Oscar for Best Special Visual Effects. And it’s undeniably kickass. It doesn’t get much cooler than a film about an anti-fascist witch who pummels Nazis astride her broomstick alongside an army of enchanted suits of armor. However the extreme tonal shifts in Bedknobs and Broomsticks didn’t work for viewers or most critics at the time, who preferred the visually impressive cartoon segments to the war plot. Roger Ebert gave the film two and a half stars, writing that children like “evil old queens and tyrannical kings and pirates and alligators. They KNOW these types are up to no good… 5-year-olds don’t automatically know Nazis are bad guys (and a Disney movie is the wrong place for them to learn, anyway).”

Ebert isn’t completely off-base. When I rewatched Bedknobs and Broomsticks for the first time as an adult I was surprised to discover that the soldiers Miss Price and her three wards conspire against are Nazis, a plot point I completely missed as a child. In a 1971 review of the movie, The New York Times called it “aggressively friendly” — so younger viewers may miss the anti-fascist backdrop of the musical. But the studio’s refusal to completely shy away from the sociopolitical realities of the film’s setting is a strength. The movie’s age-appropriate acknowledgement of the horrors that impact people, including kids, is what makes Bedknobs and Broomsticks more than just the “alt” Mary Poppins. Many children have a greater grasp of what real-world evils look like than Ebert and other critics give them credit for. Like Charlie, Carrie and Paul, Lansbury herself was evacuated from London as a young teen during the Blitz.

The mayhem of Bedknobs and Broomsticks — a soccer game between real people and cartoon animals alongside a Nazi invasion — reflects the topsy-turvy reality of life. As we have all learned during the pandemic, in times of conflict, there is also joy. Absurdity, laughter, and music can and do coexist with pain and suffering. Intentionally or not, Bedknobs and Broomsticks captures this contradiction well.

When the stage adaptation of the film hits theaters later this year, audiences will have a new opportunity to travel the world with our favorite Nazi-punching witch. But until then, give the original film a watch (or rewatch). It’s time to start believing.

Bedknobs and Broomsticks is streaming on Disney+. 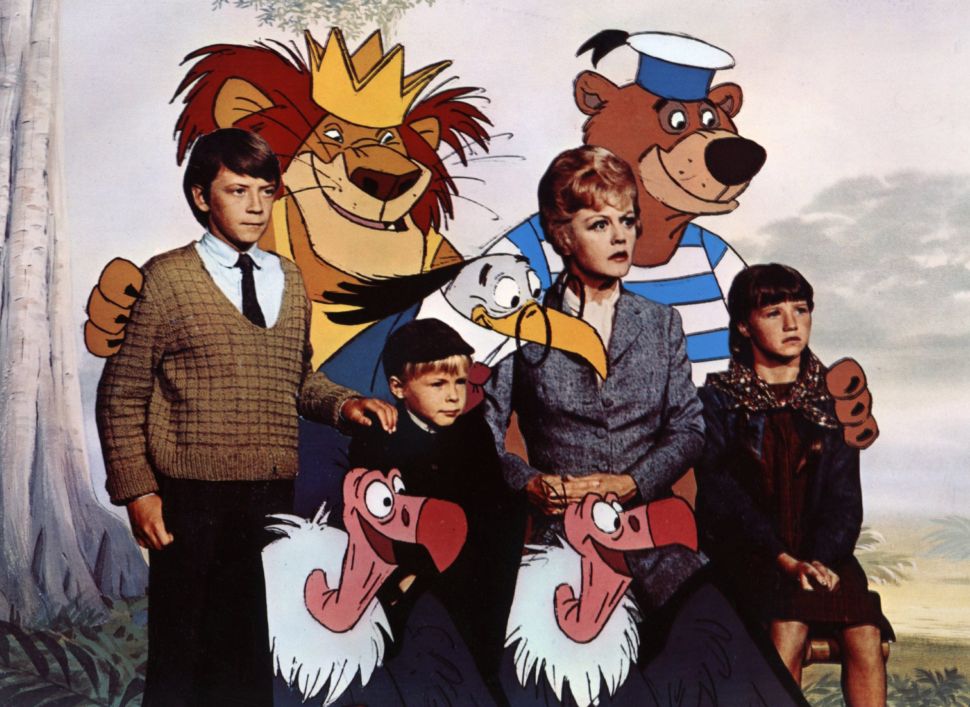