A scant few pages into Charlie English’s The Gallery of Miracles and Madness, I was reminded of a recent, strange phenomenon: several accounts cropping up on my Twitter feed zealously devoted to “Traditionalist architecture.” Their pages were full of photos comparing Gothic and Neoclassical buildings with what they termed “communist Soviet-era” apartment blocks. Saturated pictures of idyllic German farming towns were held up next to shots of dreary urban intersections. The sentiment never varied. Take us back to before our cities were polluted. They were sometimes accompanied by captions extolling the virtues of “beauty” and “elegance” – values that they asserted were now irrevocably warped by modern architectural sensibilities.

I doubt these posters knew how dangerous and terrible the roots of their rhetoric were, disguised under a longing for tradition. Charlie English’s The Gallery of Miracles and Madness would do a fine job of enlightening them as to how inextricably aesthetic, artistic and political sentiments are linked. Elegant and exhaustively-researched, English outlines the rise of “psychiatric art” in Weimar-era Germany, tracking its influence and eventual clash with Hitler’s obsession with remolding the artistic character of Germany. The fact that we all know the inevitable tragic conclusion – the mass murder and sterilization of individuals housed in psychiatric facilities, as a “trial run” for later concentration camps – doesn’t lessen the horror and impact of English’s careful account. It’s upsetting, and challenging. It’s also necessary reading in our current time, where musicians are thrown into jail over “treasonous” lyrics, and artists are imprisoned for creating their work. To those who still ask the perennial question – “Is art still valuable in our disastrous contemporary moment?” – The Gallery of Madness and Miracles provides a definite, indisputable “yes.”

The first section of Miracles and Madness is structured around the collection of works from the inmates of various psychiatric institutions by Hans Prinzhorn, a doctor and art historian. Prinzhorn, despite his later tentative support of the Nazi regime, was at that time a progressive, opposed to the popular sentiment that “madness” was a sign of a “diseased” or “degenerate mind.” English clearly and vividly outlines the failure of the era to understand mental illness, most particularly schizophrenia, which was believed to carry a sentence of “inevitable decline,” and the additional failings of the psychiatric care available. Hospitals were a convenient storage space for “deviants,” so the general public would be spared from dealing with them. This dehumanizing attitude later led to forced sterilization under the Nazis, and the term lebensunwertes Leben – “life unworthy of life,” providing the excuse for the eventual mass murder that would claim thousands of neurodivergent lives.

Prinzhorn, however, found the art produced by patients fascinating – and most importantly, of genuine artistic worth. After collecting and exhibiting a vast amount of art from dozens of patients, Prinzhorn photographed the work and published Bildnerei der Geisteskranken (Artistry of the Mentally Ill). The book, and the work itself, went on to heavily influence the work of many notable artists of the time. Paul Klee, an avid fan of the Bildnerai, “appears to have taken direct inspiration from a Prinzhorn-owned work, Circle of Ideas of a Man.” Surrealist Max Ernst was so moved by the exhibited work that he began to attempt to create collages that resembled hallucinations. Dalí makes direct reference to a piece by Prinzhorn-owned artist Joseph Schneller in his essay “The Tragic Myth of Millet’s The Angelus,” and Richard Lindner called Prinzhorn’s collection “the most important artistic experience of my life.” There are even claims that Picasso’s Téte de femme is a reference to work by artist Heinrich Anton Müller, who featured in the Prinzhorn collection. Drawings exhibited by Prinzhorn, from artist August Natterer, even influenced Koga Harue to create one of the first works of Japanese Surrealism, Endless Flight (1930)

English’s deeply thorough account of the influence the Bildnerai wielded reveals the fetishization and objectification of “the insane” by artists – a sentiment that is unfortunately alive and well. Affluent and successful artists took direct inspiration from incarcerated patients, sometimes even copying their images and composition, and made little effort to credit them. The Surrealists, who English admits “romanticized mental illness,” were obsessed with the supposed “purity” of insanity, with some artists, like Dalí, trying their best to induce insanity, in the belief it would make their work more “raw” and “true.” André Breton even remarked that “they [the insane] derive a great deal of comfort…they enjoy their madness.” This parasitic relationship is at times glossed over by English, who gives a detailed biography of several artists – most notably a talented metalworker diagnosed with schizophrenia, Franz Bühler – but gives only brief sketches of others. The result is that The Gallery of Miracles and Madness often feels as if it is populated and driven by ghosts. Their lives, “a succession of steps in an endless routine: sleeping, sitting in bed, waiting for food, smoking, queuing for the barber’s chair,” go mostly non-memorialized.

The second and third sections, however, are a masterclass in biography. English’s account of Hitler’s early life, his lack of artistic skill, and “artist-Führer” persona, is brilliantly engaging. Hitler’s hatred of modernist art, which he characterized as “degenerate,” is linked clearly to his deep racism and xenophobia, with the entirety of degeneracy theory itself stemming from Gobineau’s hateful racial hierarchy developed in France in the 1850s. In Hitler’s mind, the mentally ill constituted an entirely different race; they were less than human. His hatred provided “a bridge to the public,” who misunderstood the avant-garde and regarded it as confusing and unskilled. Modern art’s “insane direction,” Hitler argued, “was not mere coincidence, but a deliberate plot by the Jewish-Bolshevik nexus to destroy Germany.” That sentiment hit a nerve with the exhausted and angry German populace, and elevated the political importance of supporting art that reflected ethnic Germans, the Volksgemeinschaft. To that end, the Reichskulturkammer organised twin exhibitions – one of acceptable, Aryan, faux-Classical art (Große deutsche Kunstausstellung) and another, of “degenerate art” (Entartete Kunst), to be shown in direct contrast to each other. English outlines these exhibitions, highlighting their darkly comedic absurdity – thousands of people eagerly flooding Entartete Kunst in favor of Große deutsche Kunstausstellung, Hitler throwing tantrums over a painting of a tennis player that was too “smeared” – without ever losing sight of the human cost of the rhetoric. “Art [was] Germany’s social glue,” Hitler declared. Controlling it, manipulating human expression and choking out any depiction that dissented with Nazi ideology, was of immense importance to maintaining the power of the regime.

The final fourth section, “Euthanasie,” is an exhausting, devastating read. English chooses to include graphic depictions of the mass gassings of patients, which is a decision that feels necessary in driving home the horror and reality of what constituted the beginning of a genocide. “[I] cannot believe [the patients] died without pain,” one observer states. Franz Bühler, as well as eighteen other Prinzhorn-owned artists, lost their lives that way – scared, confused, deprived of human dignity and respect. Their art was either destroyed or committed to storage. It’s here that the injustice of the situation becomes almost unbearable. Affluent or successful artists could escape Germany, but the patients that they had plagiarized could not; first enduring terrible conditions in overcrowded facilities, and then mass murder. Despite the Surrealists’ profession of how valuable insanity was – “the great art,” as Dubuffet said – actual individuals suffering from mental illnesses were only ever fodder for those lucky enough to live outside of institutions. This is a dynamic that seems to have endured to the present day: Mental illness is still deeply misunderstood and fetishized, even in artistic communities. Many still regard neurodivergent people as dangerous, less valuable; simply a problem for society to solve. In other words, “degenerate.”

Despite occasional gaps in focus – which, admittedly, is most likely informed by the scarcity of surviving records of psychiatric patients at that time – English does a marvelous job of creating a readable, emotional text, elevating fact to narrative – spinning gold out of hundreds of fractured sources. With his capable hand, history comes alive. The Gallery of Miracles and Madness is proof that the past is closer than we think. It was barely eighty years ago that Bühler, master metalworker and artist, one-time representative of Germany at the Chicago World Fair, was being led to his death. We are not as far removed from such violence as we like to believe. In that regard, Charlie English has written something remarkable: a work of historical nonfiction that feels urgent and overwhelmingly relevant to the world we live in. 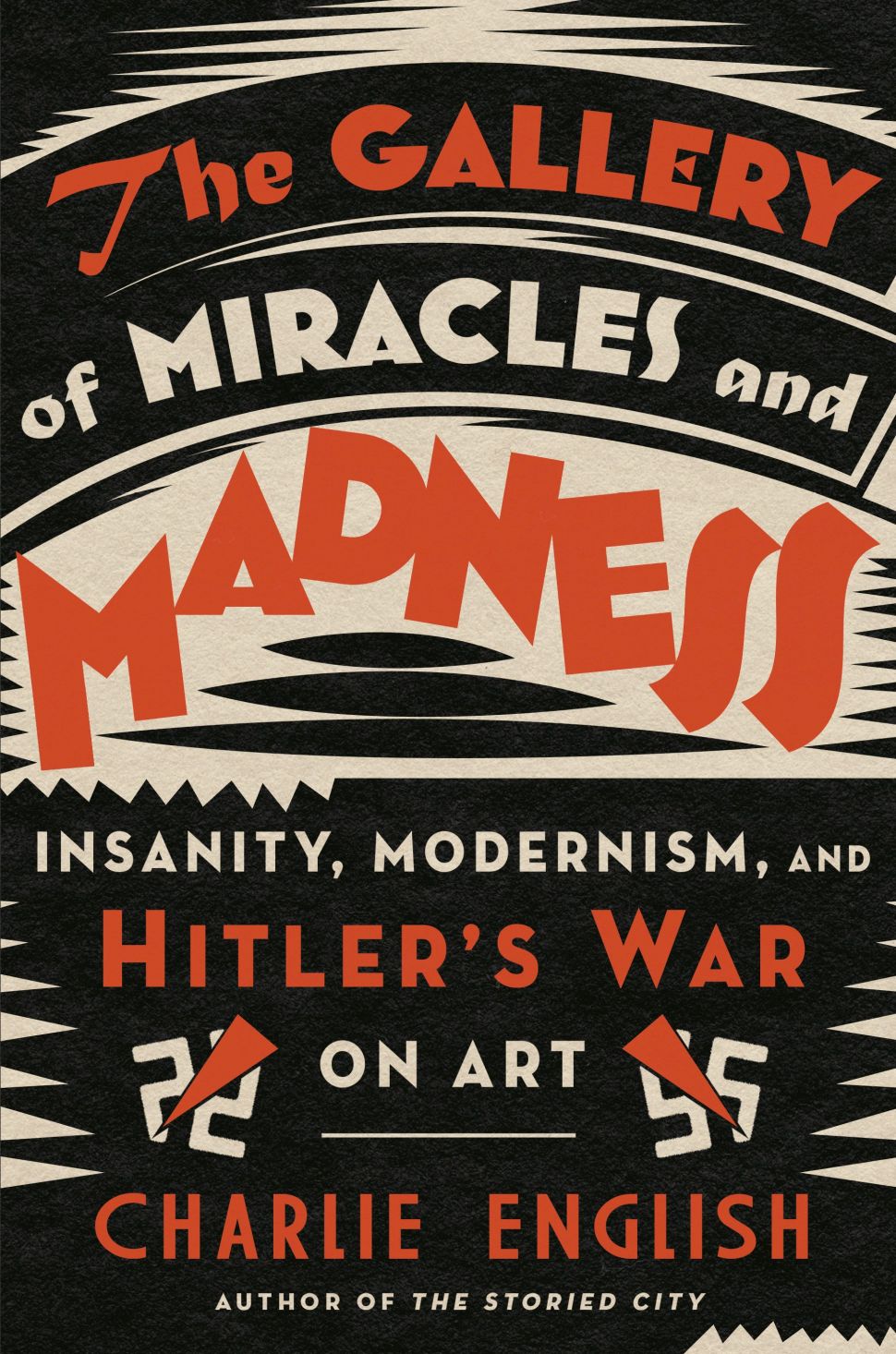