A sleeper hit from 2016, Fede Álvarez’s Don’t Breathe was about a trio of nimrods who break into a blind guy’s house in search of filthy lucre and experience terrors they could never have imagined. Its sequel, Don’t Breathe 2 is about a bunch of lemmings who head into a horrifying and dark place in search of a good time knowing full well the dreadful things that might befall them.

Of course, that’s not the movie’s actual plot. No, that just describes what it’s like to see the thing, which is playing exclusively in theaters, as both a paying customer and a film critic, while we all contend with the twin surges of the Delta variant and vaccine misinformation.

The film itself plays like an extended riff on the famous scene where the Frankenstein monster befriends a little girl. In it Stephen Lang’s blind stand-your-grounder from the first film (the credits name him Norman Nordstrom) is in paternal mode, raising and homeschooling a precocious 11-year-old played by newcomer Madelyn Grace. (Electives include Survival, in which the girl, whom he calls Phoenix, attempts to outmaneuver his vicious guard dog Shadow.)

Things get hairy when the two become targets of a marauding bunch of meth producers who may also be part of an illegal organ procurement ring that is menacing a Detroit that seems almost entirely devoid of life. It’s a borderline ridiculous setup for a film that feels like Rambo in a haunted house, but it often works, even if in sum it is less terrifying than the prospect of the guy three seats down taking his mask off halfway through.

Alvarez hands over the directing reins to Rodo Sayagues, his co-writer on both this and the original film, and his fellow Uruguayan filmmaker follows the former’s blueprint with exactitude. Once again the camera elegantly sweeps around the kind of crumbling urban architecture we have all made a habit of swooning over on Zillow, discovering both interlopers and stray objects that later can be jammed through their flesh. (In addition to the blind man’s rambling house, the film concludes with a grisly series of set pieces in a once-stately abandoned hotel.)

There’s a healthy variety of scares, though the film gets most of its mileage out of Lang’s shadow-cloaked scarred visage, a menacing physical presence that contrasts nicely with his choked whisper of a voice. Once again there is a squirm-inducing twist, one perhaps even more disturbing than in the original. Yes, it stretches credibility, but it also turns the story into something resembling a gothic, gore-filled fable.

Yet — as is the case for many of us over the past year or so — the new version is less muscular than the previous edition, and quite a bit flabbier. Don’t Breathe milked a lot of tension out of just three overmatched antagonists facing off against the bloodthirsty blind man, while the sequel piles on a seemingly endless supply of dudes-to-be-dismembered void of personalities. And where the original was pleasingly free of deep thoughts, the new one makes the mistake of occasionally wading into the metaphysics. No, I don’t need to hear the chokehold-loving military vet’s thoughts on God.

So, is it worth confronting actual terrors for the timeworn pleasure of sharing well-crafted fake ones with total strangers? Perhaps, under the right circumstances. (At my screening, they checked our proof of vaccination on the way into the theater, which aided in my peace of mind.)

But I couldn’t help but feel, even while I thrilled to the bloody flourishes of Don’t Breathe 2’s Grand Guignol of an ending (when I wasn’t blocking myself from witnessing them), that with this much skin in the game, I wanted something newer and fuller of surprise than what I got. Maybe it is too much to expect a sequel to be as fresh and vigorous as the one that preceded it, but in this moment, it must be at least terrifying enough to allow one to forget the terror they are forced to encounter to watch it. 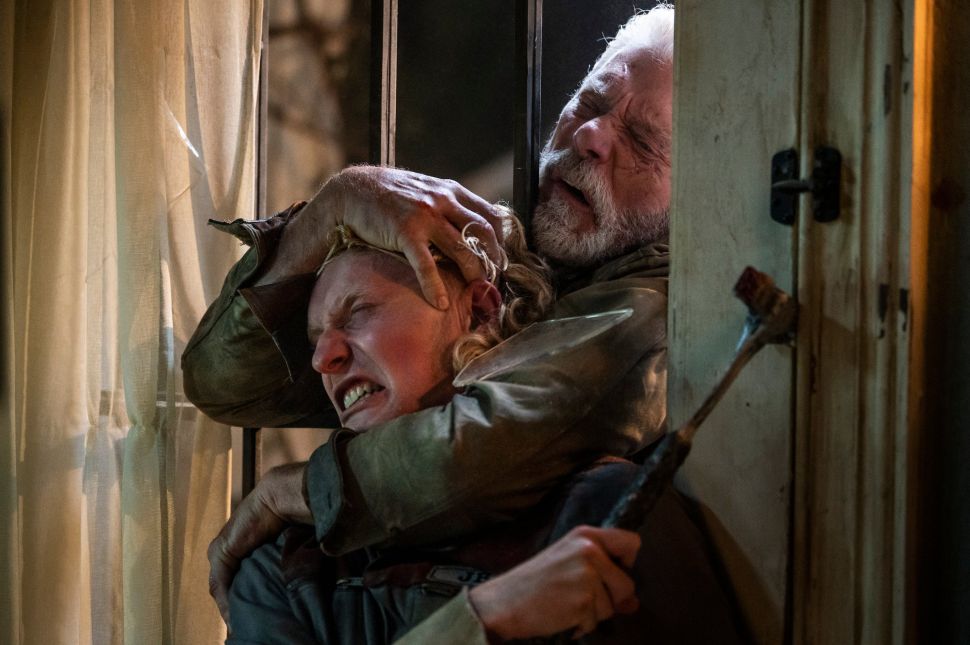