In order to get an idea of what kind of mood to anticipate from their boss Elon Musk at work, Tesla and SpaceX employees found it helpful to keep up with his… romantic partner’s hair color. When the Tesla CEO was married to British actress Talulah Riley (from 2010 to 2012 and again from 2013 to 2016), for example, he seemed more agreeable when Riley’s hair was a certain shade. He was “happiest when her locks approached platinum,” Tesla employees told author and Wall Street Journal reporter Tim Higgins.

That’s one of the curious details included in Higgins’ new book, Power Play: Tesla, Elon Musk, and the Bet of the Century, out Tuesday, first reported by Business Insider. The detail was also included in a 2018 WSJ report on Musk’s possibly problematic mood and temperament.

Although Musk vehemently denied some parts of the book (calling it “both false and boring”), including an allegedly contentious interaction between himself and Apple CEO Tim Cook, which both of them said didn’t happen, the revelation about Musk’s strange obsession with his life partner’s hair color seems solid and we were able to find corroboration elsewhere.

Higgins managed to make his book both false *and* boring 🤣🤣

In an essay for Marie Claire in 2010, Musk’s first wife and the mother of his six children, Justine Wilson, looked back on her own frustration with her ex-husband’s specific taste in women’s hair color.

“When I first met Elon, I wasn’t blonde…No matter how many highlights I got, Elon pushed me to be blonder,” she wrote. “‘Go platinum,’ he kept saying, and I kept refusing.”

Wilson also recalled her first impression of Riley when Musk texted her six weeks after their divorce that he’d been engaged to the the actress. “At least she wasn’t blonde. I found that refreshing,” Wilson wrote.

Wilson described Riley as “lovely, bright…and better fitted to my ex-husband’s lifestyle and personality than I ever was.” Yet, by the end of the 2,800-word essay, she observed, “Although she had dark hair when she and Elon first met, she is now blonder than I’ve ever been.”

Musk is currently dating Canadian musician Grimes, who is naturally brunette but has been dying her hair a kaleidoscope of colors since she was 10, according to Vogue. 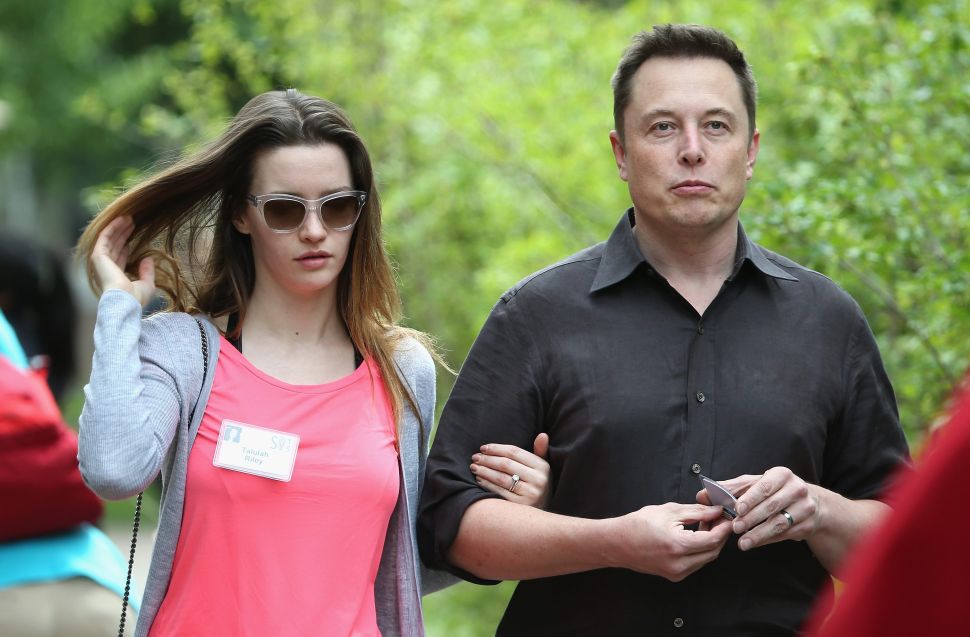