SpaceX’s newest prototype of the giant Mars-colonizing spacecraft, Starship, is getting ready for its first orbital test flight as soon as this week.

On Saturday, Elon Musk showed up at SpaceX’s “Starbase” test site in Boca Chica, Texas, with his 14-month-old son, X Æ A-12, in one arm, to oversee the final preparation of the Super Heavy booster, which will push an upper stage called SN20 to Earth’s orbit.

“Installing Starship booster engines for first orbital flight,” Musk tweeted along with a photo of himself and baby X standing at the feet of a towering Super Heavy.

The Super Heavy-SN20 combo will be the largest rocket ever built to go to space. The booster alone is 230 feet (70 meters) tall. The upper stage is 150 feet tall. Both craft are designed to be fully reusable like SpaceX’s Falcon 9 rockets.

SpaceX has test flown five Starship upper stage prototypes to high altitude (10 kilometers). Only one of them landed in one piece. Lifting off an upper stage atop a booster requires a whole different level of thrusting power. The Super Heavy standing on the launch pad now has 29 Raptor engines. Musk has said the final version will have 32 or 33 engines—the upper stage prototypes in previous high-altitude tests only had three—to provide up to 230 tons of thrusting power.

Last Thursday, Musk tweeted a photo of the fuel feed system of Super Heavy, in which a maze of metal tubes and wires spread out from the rocket’s center like a bicycle wheel.

“That’s just the primary fuel lines!” he tweeted. “The maze of secondary plumbing & wiring is our greatest concern.”

SpaceX’s Raptor engines run on cryogenic liquid methane and liquid oxygen. They have more than twice the thrust of SpaceX’s Merlin engine that powers the current Falcon 9 and Falcon Heavy boosters.

“Raptor V2.0 is a major improvement in [simplification], while also increasing thrust from ~185 tons to ~230 tons. Long-term goal is engine cost below $1000/ton of thrust,” Musk tweeted on Thursday.

On July 19, SpaceX ignited three Raptor engines on Super Heavy for a brief “static fire” test on a launch pad. The company may do a nine-engine static fire test before the orbital test. 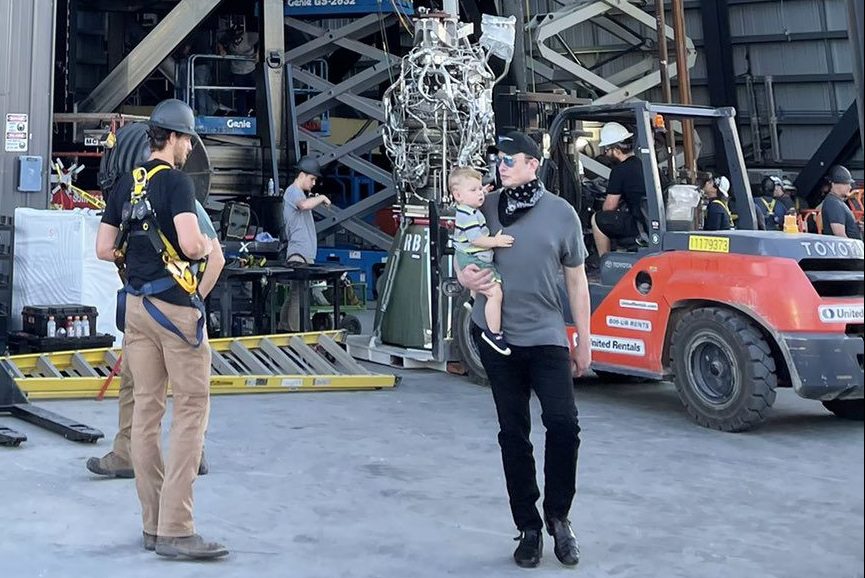