When it comes to broad studio comedies, certain critics approach the lowest common denominator humor with upturned noses and scowls of disapproval. But I say that straddling the line between stupidity and superlatives is an art form. The cliffside edge between low brow and high brow is quick to toss promising comedies to a diminishing descent. But 20th Century’s new R-rated raunchy riot Vacation Friends, directed by Clay Tarver (Silicon Valley) and hitting Hulu today, manages to perch itself atop the teeter without too much fumbling and stumbling.

In this undeniably absurd but mostly raucous romp, strait-laced Marcus and Emily (Lil Rel Howery, Yvonne Orji) are befriended by wild, thrill-seeking partiers Ron and Kyla (John Cena, Meredith Hagner) at a resort in Mexico. Living in the moment, the usually level-headed couple lets loose to enjoy a week of uninhibited fun and debauchery with their new “vacation friends.” It’s a familiar set-up — the uptight folks need to loosen up a bit — that isn’t going to challenge the form and function of the genre. Months after their walk on the wild side, Marcus and Emily are horrified when Ron and Kyla show up uninvited at their wedding, creating chaos and proving that what happens on vacation, doesn’t necessarily stay on vacation. You get the idea. But look past the initial set-up for a moment.

These two interlopers love to party, considering it rude not to spike the margaritas of their new friends with cocaine within minutes of meeting them. Yet despite the wild and over-exaggerated exteriors, Ron and Kyla are relentlessly kind, supportive, understanding, and optimistic people. They’re like if Ted Lasso went to the University of Arizona.

John Cena continues to prove his effective comedic chops when allowed to cut loose à la Trainwreck and Blockers. Often when athletes cross over into film, they’re noticeably stiff and rigid, consumed with the execution of the line delivery and not the intent and feeling behind it. Cena, when allowed to shed all sense of inhibition as opposed to playing the bland action straight man like in F9, let’s everything flow. Puffed up oversized muscles masking a vulnerable and soft underbelly that belies expectations and splits the difference between well intentioned saint and certified madman. His Ron has lived such a full and eclectic life that he’s well versed in obscure spiritual theology and can predict with deadly accuracy when a bird is about to defecate.

At some point in time, the Gods of Hollywood decreed that every comedy needs a good montage. Think about the endlessly creative penis sketches in Superbad, the bar scene cut to Fergie music in The Other Guys, or any number of riotous nonsensical sequences in The Wolf of Wall Street. Vacation Friends’ contribution to the tradition may not be quite as memorable, but it’s whole hearty laughable and that’s good enough for us. It helps that the entire movie boasts an absolutely banging soundtrack that amplifies the comedy.

What makes all the psychotic behavior, looney hijinks and generic conflict construction (disapproving father-in-law and all) work in Vacation Friends is its undercurrent of sweetness. Strip away the cocaine-loving, boundary shattering, straight jacket-worthy behavior of Ron and Kyla and you get two wounded people doing everything they can to make friends and spread kindness. It’s a necessary counterweight to the foul-mouthed lunacy that Vacation Friends leans on throughout. Sure, it’s a silly R-rated raunchy comedy in which we get both testicle and poop jokes (classic). But it’s proudly open hearted and a funny, if absurd, champion of friendship. I can’t wait to take my next vacation. 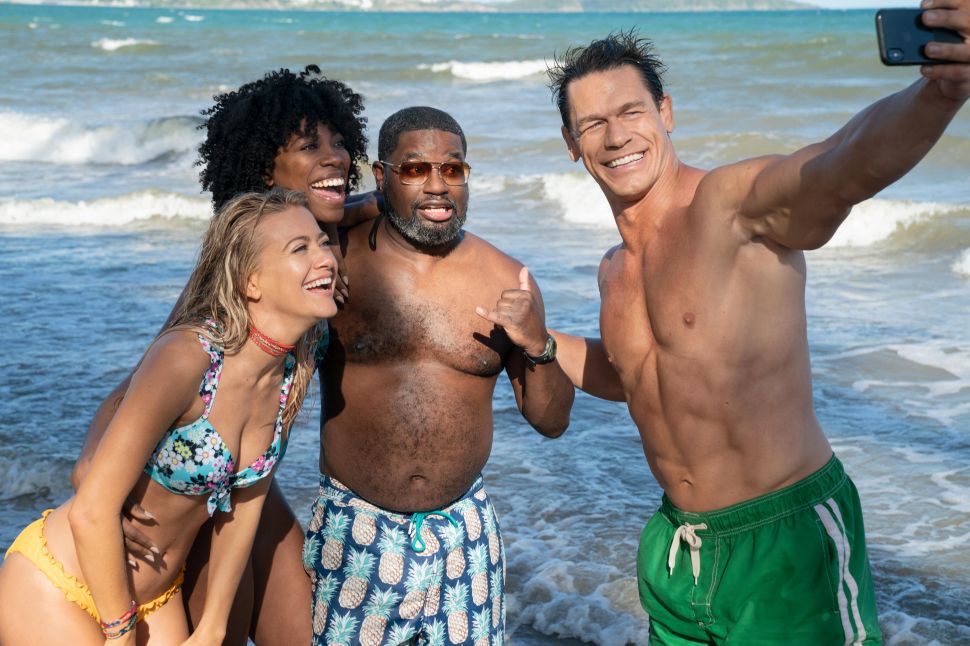