The world is burning down. Or is it burning up? We’re lighting the matches either way. In the solo exhibition The Black Sheep and Other Fables, which was on view at James Fuentes’ online gallery until August 1, artist Jorge de León presented snapshots of chaos from 2019 to present. On raw, textured, 4×6-inch canvases, he paints a protestor in an Elmo costume, Notre Dame’s spire ablaze, hazmat-suited figures wheeling a gurney past an agua fresca stand, and the sky colored CMYK red from Oregon wildfires. You’ve seen these before. Scroll back further; they are replicas of the pictures you already shared.

Like the rest of us, de León is used to watching faraway destruction through the filter of mass media — a term that gets closer to its dictionary definition for every civilian TikTok aired on NBC. Over twenty years, de León has saved images he saw in local and international newspapers, print and online, redelivering his favorites with brushstrokes. But he isn’t mining for historical milestones the way a parent might tuck a New York Times from the day their baby is born into a keepsake box. His artist’s eye treasures the composition, color, and humor in a scene of headline-making horror.

The paintings in the exhibition were all untitled, further distancing de León’s pieces from their original source material. Sometimes they’re identifiable; barely-there strokes on a black canvas still click as the White House with the lights turned the off, an image that circulated during the June 2020 protests after George Floyd’s murder and in the first ten days of the Biden administration. de León must have been tickled that it was in fact a doctored image ripped from a stock photo site, spread by QAnon adherents and primetime networks alike. He’s not painting the news so much as he’s painting the embroidery on the curtain that conceals it.

In her review of Ali Smith’s Autumn, Olivia Laing proposes, “Maybe an accelerated news cycle requires accelerated art.” de León’s series has a frantic quality, like he whipped out an easel and painted the riot en plein air. Unlike the clean lines and careful words of Barbara Kruger’s appropriation of mass media, de León’s small canvases reflect the decontextualized immediacy of a Twitter timeline refreshing to infinity. His practice has always been kinetic, having worked as a tattoo artist in his late teens and early twenties before entering art school and shifting to live body performance. In one work, he sewed his mouth shut to demonstrate that “Guatemala is a country where no one speaks the truth.”

The exhibition’s title The Black Sheep and Other Fables was taken from the 1969 book by Augusto Monterroso, a Guatemalan writer who specialized in the microstory. (His most famous is The Dinosaur: “Cuando despertó, el dinosaurio todavía estaba allí. [When he woke up, the dinosaur was still there].”) Like de León, his work is critical of his country’s government — which was a dictatorship engaged in a 36-year civil war during Monterroso’s life and is a corrupt republic during de León’s — and expresses discontent through dark satire. The Black Sheep story is about western art and culture’s murder of Otherness in order to make it a muse, providing another tool to interpret de León’s paintings: these art-ifacts are a record of our fetish for bad news, the perverse delight we take in informing dinner party guests that a football field of forest is burning every five seconds.

Humanity’s non-response to the climate crisis could be partly attributed to an evolutionary inability to comprehend our own extinction; our brains focus on what is immediately essential to our survival and reproduction. de León’s pulp imagery is so simple, so contemporary, it’s hard to argue with a perspective of extreme nihilism. 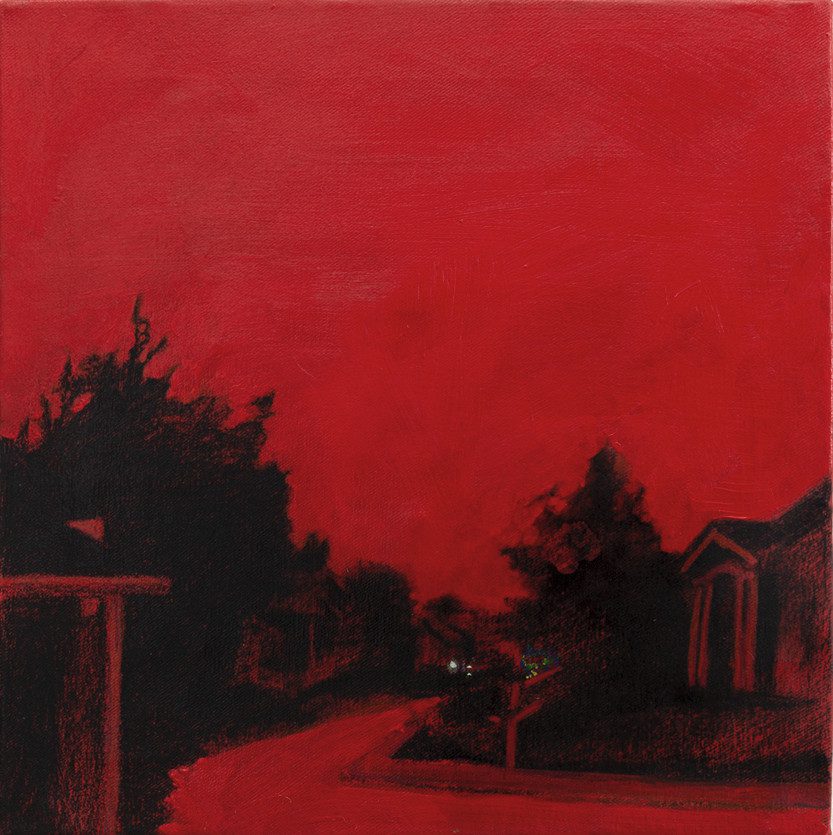