A new exhibition at the de Young Museum in San Francisco, California marks major feminist artist Judy Chicago’s first retrospective. “Judy Chicago: A Retrospective” is the first exhibition to offer a comprehensive survey of her work from the early sixties to today. And while there have been many exhibitions that have shown Chicago’s work, they’ve often been focused on individual bodies of work or a selection of works from several decades.

While there has never been an exhibition that looks across the entirety of her career and the last six decades of art making, this exhibition includes a representative selection of all her major bodies of work, as well as archival materials in particular sketchbooks and travel journals that have never been seen before, shedding light on her process.

“What connects it throughout the decades is Judy’s insistence on aesthetic strategies that marked a break with modernism and harks back to popular and folk art traditions,” Claudia Schmuckli, the exhibition’s curator and the Curator-in-Charge of Contemporary Art and Programming at the Fine Arts Museums of San Francisco, said to Observer. “That is a connective tissue throughout the entire exhibition and that will be very apparent for people who have never seen all her work in its entirety.” To be able to look at the entirety of her output in relation and not in bits and pieces, Schmuckli says, is going to create a whole different understanding of her process and her thinking as she approaches each body of work.

The retrospective starts with her most recent work and moves back in time, ending with her early work. “The format of the retrospective was motivated in part by the reception of her work to date and focused primarily on the sixties and seventies, while her work from the eighties onward is lesser known,” Schmuckli says. “We liked the element of surprise that a reverse presentation would offer.”

It was also important to show Chicago as an artist who is very much alive and has never ceased to make work that is deeply engaged with current issues and concerns. “So grounding the opening of the exhibition in the present seems like an appropriate gesture to emphasize the fact that she is still producing and working at the same pace and with the same intensity as she has when she started out as an artist,” Schmuckli explains. Judy’s most recent body of work focuses on mortality and death, the fear of dying, as well as the extinction of other species on the planet and extinction that is caused by human action.

Prior to mortality, death, and extinction, she did a significant body of work that explored the Holocaust in particular, but also genocide in general, alongside work that showing the light on the dynamics of parts are key thinking about power and powerlessness. Prior to that, she did an extensive body of work in collaboration with 150 volunteers that centered around birth as an act of creation. This focus grew out of her research for her popular work, The Dinner Party, which was dedicated to surfacing historic female figures that have shaped Western history from antiquity to the 20th century, which established her thinking around gender as a social condition and construct. Prior to that in her early work or minimalist work, she was deeply concerned with finding a language for female desire and sexuality that also carried into her early feminist work, which then led up to The Dinner Party, Schmuckli says.

Chicago was born into a family with an acute sense of social justice. According to Schmuckli, her father was a member of the American communist party and actively fought for workers’ rights while both of her parents embraced liberal views towards women, which strongly influenced her artistic aspirations. This has always been closely aligned with her desire to surface the systemic nature of social inequity, beginning with her recognition of her place as a woman in patriarchal society. She then extended beyond it.

Having the exhibition in California is significant, too, as the state was critical to Chicago’s early formation and career. Though she grew up in Chicago, she went to graduate school at UCLA and emerged as a young artist in Los Angeles. California is also where she instituted the feminist art program first at Fresno State and then at Keller Miriam Shapiro in the early 1970s. San Francisco is not only the originary show place for The Dinner Party, which was presented at SF MoMA in 1979. “This exhibition is very much a homecoming for her,” says Schmuckli.

A consistent through line of her story is a rejection from within the art world says Schmuckli. Both from her peers, primarily male artists, as well as from critics who were also primarily male. According to Schmuckli, this goes back to her early career in Los Angeles where certain curators refused to do studio visits with her or her colleagues rejected certain bodies of work because of their content. But of course it’s most crystallized in the reception around The Dinner Party, which was shrouded in controversy from its initial showing in 1979 through the nineties. “For decades it basically haunted her and limited her ability to show her work in the institutional context,” says Schmuckli.

There’s tension between people’s response to the work and the institutional art world’s response to the work, which is part of the legacy of the piece. “Since 2007, its permanent home has been at the Brooklyn Museum and it is now firmly established as a premier feminist artwork and it has entered art history books as one of the most iconic works of its time,” Schmuckli says.

So, what will viewers gain from this exhibit? “A new appreciation for Judy Chicago as a visionary artist of incredible maker whose range and achievement includes, but goes far beyond the work that most people associate her with,” says Schmuckli. “I hope that visitors will walk away realizing that Judy Chicago is not just this historical figure whose work speaks to social turmoil of the past, but one whose work old and new is deeply resonant with the present moment.”

But also, she hopes viewers understand the magnitude of her legacy. “In terms of her legacy, I think it is her insistence on creating a space in and with art, for the debate of inherited values and attitudes,” Schmuckli says. Her aim has always been for the voices of people and communities on the margins of patriarchal society, and giving them the power to be heard and seen. And for the longest time, the art world was not receptive to the discursive aim of her art making, but as the social consciousness of society at large is changing. 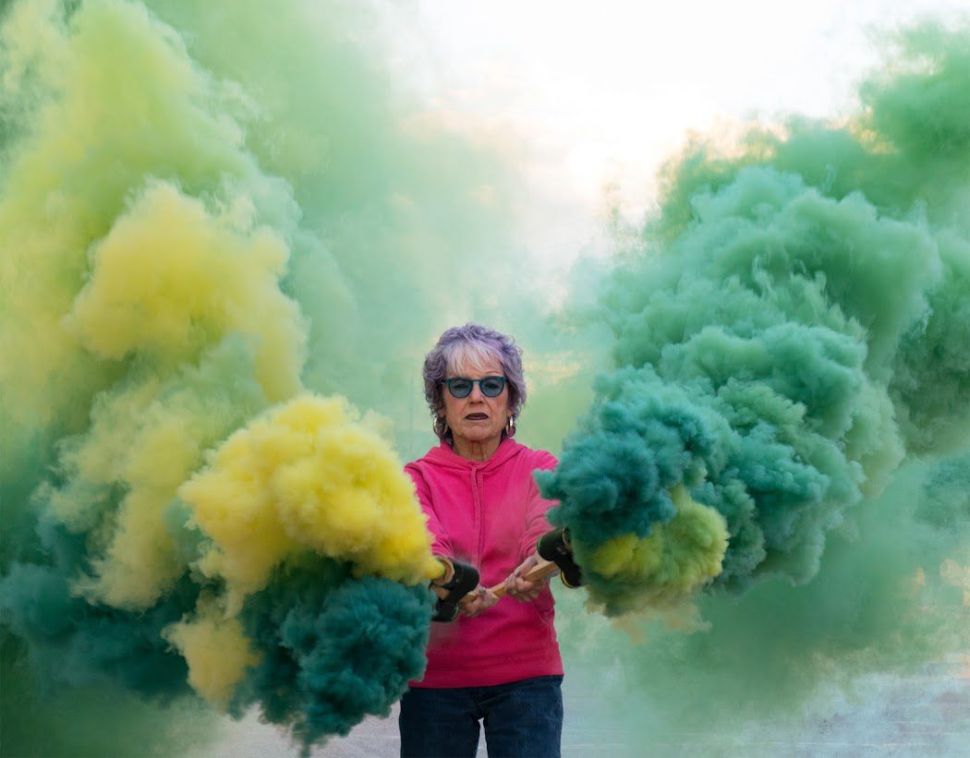