In a climactic sequence in Jungle Cruise, Emily Blunt’s Lily Houghton and Dwayne Johnson’s Frank Wolff are tasked with diving down from their boat to solve an underwater puzzle, which proves more difficult than anticipated. Lily becomes trapped in the puzzle, fighting for air, and it takes some clever thinking to force it open and drain the so the pair can access a secret cave. Filming a scene like that requires an expert, which came in the form of underwater director of photography Ian Seabrook. Seabrook, known for his work on films like Mission: Impossible – Ghost Protocol and Batman v Superman: Dawn of Justice, stepped in to help director Jaume Collet-Serra ensure that the underwater scenes were shot as seamlessly as possible.

Watching the underwater scene in Jungle Cruise is stressful, but Seabrook tells Observer that shooting it wasn’t. It’s all about that believable illusion created for the screen.

“Oftentimes when you watch scenes that are underwater the tendency is to try to hold your breath for as long as the characters do,” Seabrook laughs. “Even though, if you’re an avid filmgoer, you know ‘Oh yeah, they’re cutting around that.’ That’s not actually how long they held their breath for.”

It’s not like you’re rolling right away. She has to get set in position, so there’s even more time to hold her breath.

Filming the sequence took a week and a half in the midst of production, in September of 2018, with the underwater unit working simultaneously to the film’s main unit, as well as its second unit. Because scheduling was tight and Johnson and Blunt couldn’t always be present for the underwater unit’s shots, Seabrook and his team filmed several days with their stunt team. Anything filmed from behind or from far away could use a stunt double instead of the main actor, although Johnson and Blunt did a lot of the sequence themselves.

“They were great in the ,” Seabrook says of the actors. “Emily Blunt is a woman of all trades — she can do an action stunt, she can do the acting. She’s very good at everything, because not everyone can pull that off. And then Dwayne’s got a long history of being physical onscreen. The pair of them were quite good. She had to hang onto his shoulders as he was doing the breaststroke, and he’s got a pretty powerful breaststroke on him.”

To complete the sequence, the filmmakers used two tanks at Blackhall Studios in Atlanta. One was an exterior tank built in a parking lot for the boat to sit in and the other was an interior tank, which held 177,000 gallons of , to shoot everything under the surface.

“The interior tank was better for visibility and for keeping the temperature of the regulated,” Seabrook explains. “Usually when you’re shooting in the open ocean or a lake or in nature, the visibility will be dictated by whatever the weather conditions are or the conditions — any of that kind of stuff. You’re fighting the elements. You’re fighting current. And the talent in the may or may not be comfortable. So the tank environment is a controlled environment. You can control the lighting. You can go slower with the talent if they’re not comfortable in the .”

You may only get one take out of people. So everything has to be ready. The first take almost has to be perfect. I have to forget my diving skills entirely and concentrate on the four corners of the frame and what’s inside it.

While the sequence makes it look like Blunt is holding her breath for several minutes as she’s trapped underwater, attempting to solve the puzzle, in reality the filmmakers usually only keep the actors under for short spurts of time. The takes averaged between 10 and 15 seconds, occasionally up to 30 seconds. Seabrook says it’s rare for an actor to have to do a take for an entire minute (although he remembers Ryan Reynolds doing a 90-second underwater take on Deadpool 2).

“A lot of times if it’s them swimming down they’ll have to get their breath on the surface and then they’ll basically just swim past camera,” Seabrook explains. “That’s maybe five to seven seconds. But for something more intricate, like where Emily’s character is trying to solve that puzzle piece, a large portion of that was done by her stunt double, Lauren, who was very good.”

He adds, “And it’s not like you’re rolling right away. She has to get set in position, so there’s even more time to hold her breath. There’s another seven to 10 seconds of fiddling before we actually roll. That gives you an idea for her stamina for that kind of work. And that set for Jungle Cruise had an overhead environment, so you had to slip into the set. We had escape routes for her, but it wasn’t like she could go straight out. She had to navigate her way out of that.”

As an underwater cinematographer, Seabrook is, of course, with the actors in the , in diving gear. He’s typically the first person to go down into the tank in order to set up the shot — similarly to how a cinematographer would set up a shot on land. Once he’s ready, a safety diver brings the actor or stunt person into the tank.

“On something like this you may only get one take out of people,” Seabrook notes. “So everything has to be ready. The first take almost has to be perfect. On my end, I have to make sure the lighting is correct and the set is ready. I have to forget my diving skills entirely and concentrate on the four corners of the frame and what’s inside it. So when the talent comes in the focus is completely on them.”

To communicate with the director, who remains outside the tank, there’s a loudspeaker positioned underwater. The director can call “Action!” via the speaker or ask Seabrook a question. The cinematographer replies by “nodding” or “shaking no” the camera, which the director can see on the monitors. “It’s a director’s fantasy of a one-way communication,” Seabrook notes. “They talk and no one answers back.”

The biggest challenge came at the end of the sequence in Jungle Cruise, as Blunt’s character solves the puzzle and the drains away. To create the illusion of the level going down, the filmmakers raised the set out of the tank with a crane. Getting the shot right meant that Seabrook had to be lifted out of the at the same time while balancing the underwater camera.

“Basically the set is lifted out of the tank by the crane and then I’m on the set holding the camera, which, at that point when it comes out of the , is about 80 pounds,” Seabrook recalls. “And you’ve got a camera housing that’s negatively buoyant in the , so it doesn’t drop when it’s submerged. It’s no different from a Steadicam, or any kind of camera that’s on a platform that needs to be stabilized or balanced. So when the set’s being lifted up, all that pressure is pushing down, so you’re holding the camera and it’s pulling you down and you still have to maintain the shot. You can’t bail on the shot because it’s too heavy — you have to really brace yourself.”

Shooting this sort of sequence is a typical day’s work for Seabrook, who is one of only a few working cinematographers who specialize in underwater filming. Recently, he’s worked on everything from It: Chapter Two to Army of the Dead to M. Night Shyamalan’s latest effort, Old. He typically shoots underwater units, but is also a second unit director — Seabrook took on both roles for the upcoming Francis Lawrence film Slumberland. The underwater sequences in Old, Seabrook’s second collaboration with Shyamalan after Glass, were shot in the Dominican Republic at Pinewood Studios, which has an infinity tank. There were also 60 feet of tunnels meshed together, which the cast had to free dive through for a scene at the end of the film.

“The actors did it in stages, but still,” Seabrook says. “That was done in the tank. They had done some shooting in coves around the Dominican, around the beach where the story takes place, and they got walloped by a lot of surf. I think they were trying to do it themselves and didn’t have a specialist there and it was a bit of a nautical disaster for some of the equipment. It’s why you hire a cinematographer who’s a specialist.”

He adds, “I would say there’s maybe five people who specialize in it with sizable credits. It’s something people go ‘Oh, I could do that. I could put a camera in the and get in there.’ And it’s more than just that. It’s a specialty.”

Jungle Cruise is in theaters and on Disney+ Premier Access now. 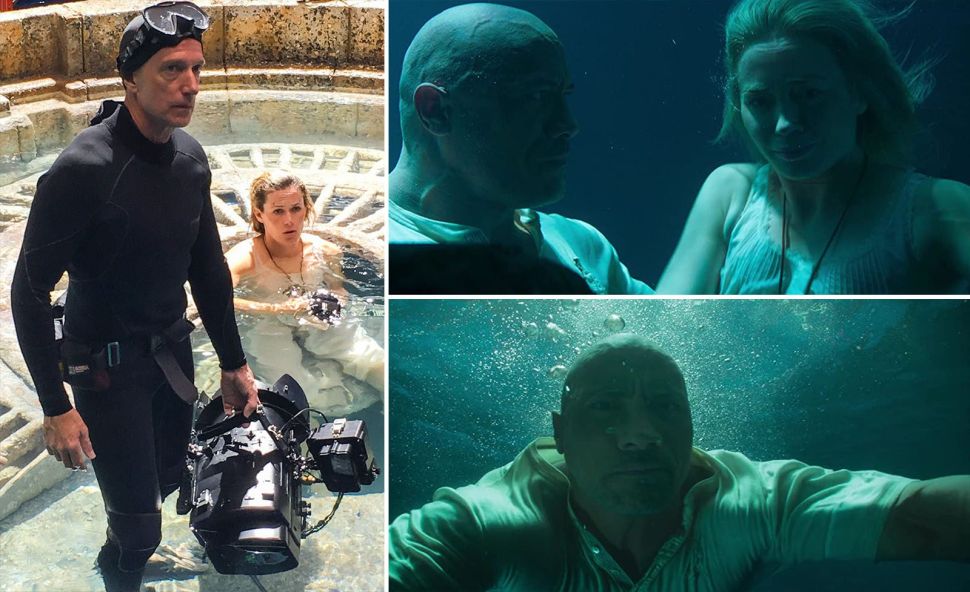