Kate Zambreno’s writing has always had the effect of drowning. Turning each page of her work, you soon find yourself immersed, surrounded by her process of thought. She is the author of eight books, and this year was awarded a Guggenheim Fellowship. Her newest work, To Write as if Already Dead, out from Columbia Press, is a study of Hervé Guibert, a French writer whose work explored the experience of AIDS, who was, as well, a close friend to Michel Foucault. Zambreno’s study is a meditation on class, death, and the urgent push to create. The first section details the disappearance of an online friend of Zambreno’s, as it explores, also, Guibert’s relationship to Foucault (Guibert’s novel, To The Friend Who Did Not Save My Life, explored the last year of his life living with HIV, and features a character, ‘Muzil,’ representing Foucault, who also suffered and died from AIDS). In the study, Zambreno wonders if it is a betrayal to write about a friend like this, and about the project of her online friend’s anonymity, in which she’d created a new persona in the literary criticism world entirely disconnected from her public author persona.

In the second part of the book, Zambreno details her struggles as an author and mother as she researches Guibert—the difficulty of finding uninterrupted time to think, the struggle for solitude, the insane balance working mothers must take on to succeed, and the length at which the labor of care work is made invisible. From someone who is admirably successful and prolific in terms of work, it was refreshing to read about—that there is still struggle, that success takes different forms, that survival often overtakes the ability to create, that the machine of capitalism makes mince of us all.

Observer: I took photos of entire passages of your book while reading and sending them to my other mom-friend writers who have small kids. I was like, Zambreno struggles like we all struggle. I admire that you write about childcare and class so openly. You do a good job of demonstrating what that looks like and it makes that experience feel a little less lonely, though not any less precarious.
Kate Zambreno: Since becoming a mother I’ve been more interested in labor, especially care work. Being a mother is so romanticized, and so its labor, the maintenance labor, is made invisible. People also want to romanticize writing and make it not labor so they don’t have to view writers as workers. Writers are, of course, workers. They’re often working, in some way, for major media companies. Of course we love writing. Of course it’s a privilege to be able to do it. But, like most people, when I started off, I was published on really tiny presses and teaching six classes in three different cities, not getting royalties for the books that sold. Most people do it at great sacrifice. Most people even publish books and fund their own publicity at a lot of sacrifice to be part of a community. There’s a passage in the Guibert study that was just how much money I spent when my first couple books came out traveling and doing readings. And how much that was the expectation. To pay to go to AWP. To pay to come to New York to do a reading. I mean, I’m glad I did that but also, it’s a strange system. Who can afford it, to do this thing?

You think about the cost of it and you’re like okay, I’m doing this because I’m trying to lay this groundwork so people know who I am.
There’s a couple writers who get the six-figure book deals, but most of the time, even if people think exposure and recognition leads to security, it doesn’t. I just taught Anna Tsing’s The Mushroom at the End of the World. She says that vulnerability and precarity are the conditions of the modern world. I think that’s really true. I just want fully funded health insurance. Which so many of us want. When you think about that, that is such a small thing to seriously desire. It’s such a small thing. It is a human right.

When I read about the struggles of health insurance in your book, I was just reminded of it and thought, I need to do this for my family. I haven’t had regular health insurance since 2016.
I was paying out of pocket for shitty insurance for the family and then I had heart problems postpartum with my first. It took me a year to see a cardiologist. I could not find any cardiologist through a hospital system through my marketplace insurance. I just won a fellowship and it’s huge for us. But I got emails saying, “I hope this means you can write for a couple of years!” and this really just allows us to pay rent this summer, and pay for astronomically expensive health insurance the next two years. That’s it.

It’s a little heartbreaking. I’m kind of like, am I doing life wrong? There’s nothing of this that’s going towards me writing. Which is okay. I’m still really grateful. But we didn’t know how we were going to subsist anymore. We’re very privileged but we’re living paycheck to paycheck as most people are. So it was more like, we needed this, as opposed to, I now can write for two years or something like that.

Would you ever give it up? Would you ever change what you are doing? Sometimes I have these panic moments where I think, I am hustling my ass off. I am scraping by. I have this child. I mean, I’ll always continue to write but sometimes I’m like, maybe I should just be doing something different.
I’ll be honest with you, Elle. I go through many periods. I won the Guggenheim a month ago and I’ve been researching master’s degrees in education for the past month because I have been really interested in Maria Montessori and Reggio Emilia and a lot of these turn of the century educational communities that were linked with social reform, partially for research and partially because of what I’ve gleaned homeschooling this year. There’s some part of me like, could I do something that’s more noble than what I’m doing now? I mean, especially with the pandemic. Could I be more active in the world? The life of a writer isn’t something that capitalism funds. Capitalism, as an incredibly inhumane system, is hostile to art making. I feel like I would be okay if the books stopped getting published, I would still be a writer or at least hopefully a reader and thinker.

I think being a writer is recognizing in the publication cycle there’s going to be a lot of unpaid labor and how to protect yourself so that you can actually still write, and have a life and have something left for you, which I think has become increasingly hard for all of us. To have anything left.

How do you get yourself to that space that you need to go to do this higher level thinking that you need to write?
Roland Barthes speaks about desk writing versus bed writing. Desk writing is formal thinking and bed writing is dreamy. I have not been able to sit up at a desk to write since I had the baby. So it’s been nine months. Because the only thinking time I have is during the nap. My four and a half year old doesn’t nap anymore. That stopped in January. And that was everything.

To me sleep is more important than time. Even when I get time the thinking isn’t really there. I also have become gentler on myself. Like: I’m just going to survive today. Maybe I’ll read a couple pages or maybe I’ll write in a journal. I allow things to ferment in a mass of notes for a while and then I allow the thinking to hopefully become more sophisticated.

It’s tough to show up all of the time, I think.
When I was pregnant I had medical-grade nausea. I didn’t want to eat anything. I checked out. I felt like I wasn’t a great parent during that time. I was just trying to exist from day to day and trying to be present. I can tell how present I am as a mom based on how much sleep I’ve gotten. It became part of the Guibert study. Guibert writes so much about time and exhaustion of the body. I felt that was the companion for me, thinking through his medical works, through what Lauren Berlant calls the “commons of suffering.”

I think to get any writing done the truth is I do check out more from my preschooler. You know? Even an hour. She hates when I do any work actually, now. This is the new stage.

How do you contend with the feelings of that? There is a passage in your book about a sense of guilt. Do you just accept those feelings in yourself and just keep moving forward?
I really thought I would get a nanny. I don’t know how to afford one but I’m going to get a nanny or I’m going to put her in daycare full time. Instead I became this attachment parent, and I’m often like, why can’t I give myself more space?

I don’t know what the answer is for that. I try to be present with Leo but also try to take some time for myself. The truth is the Guibert study I wrote when she went to bed. I wrote when she napped. Kids, they’re going to be okay. As long as a caring adult is taking care of them. But there is definitely this psychic drama that happens at this age, at like three or four where it’s like you’re damned if you do, damned if you don’t. I feel like no mother wins at all. 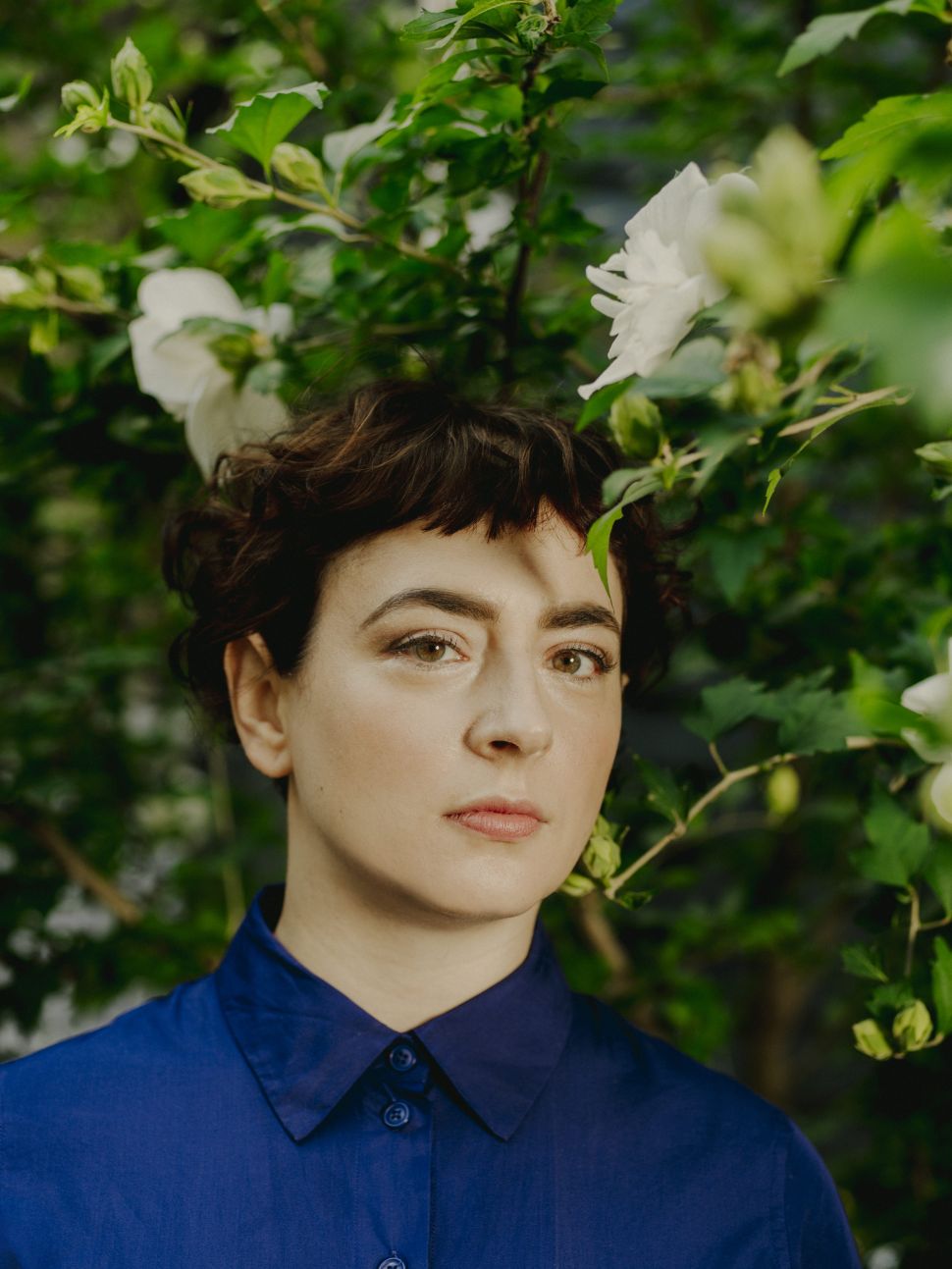