It’s been quite the jet set summer for Kourtney Kardashian and Travis Barker, and now the couple has made their way to Europe. The reality television personality and the Blink-182 drummer are living their best vacation lives in Italy, on a trip that has thus far included a yacht, fashion show and many PDA moments that made it to the ‘gram.

Kardashian and Barker’s jaunt to Italy is a big deal for the couple, as it’s just the second time the musician has traveled by plane since he survived a horrifying crash in 2008. Barker’s first airplane trip since the accident was earlier in August, when he and Kardashian flew to Cabo together on Kylie Jenner’s private plane.

The couple started out their getaway in a very glamorous way, aboard a yacht that included a stop in Portofino, where Barker Instagrammed a snap of the duo kissing. Kardashian also posted a photo of the two making out on the palatial boat, while sailing along the Mediterranean.

Kardashian and Barker headed ashore to stroll around the picturesque Italian seaside town, where they went shopping and dined on plenty of pasta, which the Poosh founder kindly shared with her Instagram followers via her stories.

Next, Kardashian and Barker spent time in Genoa, where they took in the sights and got in a beach day in San Fruttuoso, before making their way to Venice, where they were spotted arriving at a taxi dock on August 29. The couple met up with Kris Jenner and Corey Gamble, and the foursome attended the Dolce & Gabbana fashion show, along with other guests including Jennifer Lopez, Kitty Spencer, Megan Thee Stallion and Zoe Saldana.

Aside from the Dolce & Gabbana fashion show and event, Kardashian and Barker embraced their inner tourists and took a gondola ride around Venice. For one excursion, they even coordinated in matching black hoodies, for a very 2000s emo moment while they took in the sights and enjoyed some gelato.

Kardashian and Barker, who are longtime neighbors in Calabasas, made their relationship official at the beginning of 2021, and they’re already very serious. The two often spend time together with their children (Kardashian has three kids with Scott Disick, while Barker shares two children with ex Shanna Moakler), including recent visits to Disneyland. And, of course, let’s not forget about Barker’s rather permanent declaration of love, as he had “Kourtney” tattooed on his chest earlier this year. 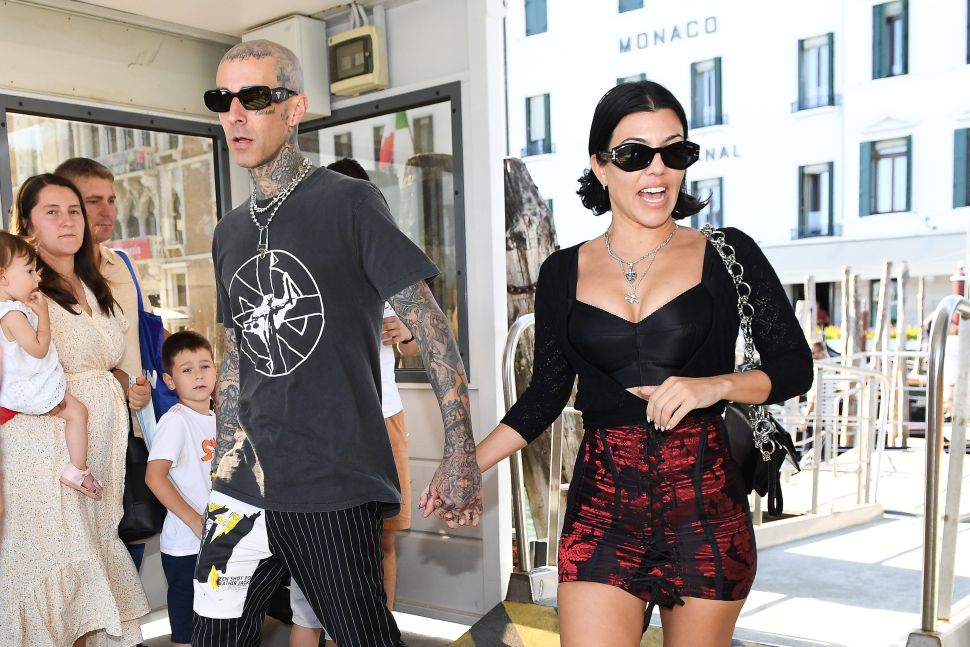