The Duchess of Sussex is celebrating a big birthday today, but she’s keeping the festivities low-key. Meghan Markle is turning 40 years old, and despite reports that she and Prince Harry hired their pal Oprah Winfrey’s party planner to organize a lavish fête with plenty of high-profile guests, the Duchess of Sussex is actually having a quiet day at home with her husband and children.

Duchess Meghan is spending the big 4-0 “privately” at the Sussexes’ Montecito estate, with Prince Harry, Archie and baby Lilibet, reports Harper’s Bazaar. Meghan has been keeping a low-profile and staying under the radar for the past few months, as she and Prince Harry are both on parental leave following the birth of their daughter, Lili, on June 4. For her 40th birthday, however, the Duchess did make her first public appearance since Lili was born, and it was for a very good cause.

Meghan appeared in a new video, now on the Archewell website, with Melissa McCarthy, to unveil the new 40×40 campaign. In the video, which first aired on Today, Meghan explains that she is asking 40 of her friends to donate 40 minutes of their time to help mentor a woman who is getting ready to rejoin the workforce. The project encourages people all around the world to participate, and there are already big names taking part in the initiative, including Adele, Amanda Gorman, Gloria Steinem and Stella McCartney.

In the clip, Duchess Meghan and Melissa McCarthy joke about plans for Meghan’s birthday; the Duchess nixes any yacht trips, and after the actress-comedian playfully references the Sussexes’ pregnancy reveal photoshoot, Meghan laughs, “peaceful under a tree is me everyday.” The two truly spill the tea, or at least sip on the herbal drink while chatting about the initiative.

The video also gave a peek into the Sussexes’ stunning Santa Barbara mansion, or at least into Meghan’s office in the home. It’s all very chic and understated, with a large bleached wood desk, stone fireplace and soft neutral carpet. Meghan’s laptop is perched upon a stack of books on the desk, which is adorned with white flowers and a large crystal. An Hermes blanket is artfully draped upon the chair next to Meghan’s.

Meghan’s pup is adorably napping on a striped dog bed in the background, and at one point, Prince Harry makes a cameo from outside the window, as he shows off his rather subpar juggling skills.

Even though Prince Harry and Meghan aren’t celebrating the Duchess’ birthday with a lavish gala, they’re surely still making the day extra-special, with plenty of cake presents and family time with their two children. While the Sussexes are still on parental leave, they’re reportedly considering a big trip next month, as they might be heading back to the U.K. for a celebration honoring Princess Diana. 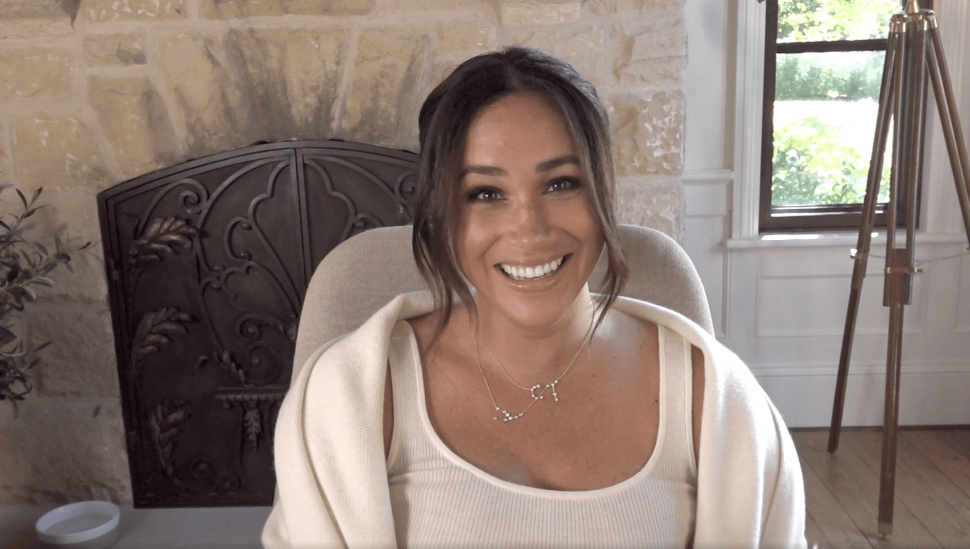