Artist Nan Goldin, together with her direct action protest group P.A.I.N (Prescription Addiction Intervention Now) staged a demonstration on Monday outside the Westchester County courthouse where the Purdue Pharma bankruptcy trial is being conducted. Demonstrators protested a proposed settlement which would leave members of the Sackler family immune to civil suits connected with the nearly 500,000 deaths in the opioid epidemic. Purdue has pleaded guilty to misleading doctors on the addictive qualities of the drug OxyContin, although no member of its owning family has ever been criminally charged.

According to The Art Newspaper, P.A.I.N demonstrators built a symbolic graveyard out of cardboard outside the courthouse Monday, with the grave markers bearing the names and faces of people who have died in the opioid epidemic. They also scattered fake prescription bottles on the plaza, along with imitation dollar bills that read “Oxy” and “the bankrupt states of America.”

In the proposed bankruptcy settlement, released by the State Attorney General’s office in July, Purdue would hand over 4.5 billion dollars to communities devastated by the opioid epidemic, and release over thirty million documents connected with the sale of OxyContin and the Sackler family’s role in distributing it. The Sacklers would further give up their family foundations to a National Opioid Abatement Trust that would commit itself to restabilizing communities impacted by the crisis. State Attorney General Letitia James has said, “While this deal is not perfect, we are delivering $4.5 billion into communities ravaged by opioids on an accelerated timetable and it gets one of the nation’s most harmful drug dealers out of the opioid business, once and for all.”

Nan Goldin is herself in recovery from opioid addiction. She described the harrowing story of her addiction and recovery in Art Forum in 2017. She describes herself as one of the lucky ones who was able to get into a treatment program and get clean. For years she has been on a mission with her group, P.A.I.N, to hold the Sackler family accountable for the devastation they wrought on communities nationwide. P.A.I.N’s target was until recently the Sackler family’s charitable organizations, particularly the arts institutions the family donated vast sums to.

Since 2017 P.A.I.N has conducted demonstrations at museums that have accepted donations from the Sackler family, including the Smithsonian, the Guggenheim, and the Metropolitan Museum of Art. Several museums around the globe, including the Louvre, have since removed or deemphasized the Sackler name in their galleries. The Met has stated that they will take no further donations from members of the family. The New York museum, however, appears to have no plans to rename their Sackler Wing anytime soon. The wing, which includes the famous Temple of Dendur, was the staging location for one of P.A.I.N’s “die-in” demonstrations in 2019.

A portion of the proposed bankruptcy settlement restricts the Sackler family’s charitable giving, preventing members from holding “naming rights” in any charitable organization for a period of nine years. However, P.A.I.N’s demonstration on Monday has made clear that the activist group is committed to holding the Sackers accountable in the court system, even after they have ousted them from their museums and charities. 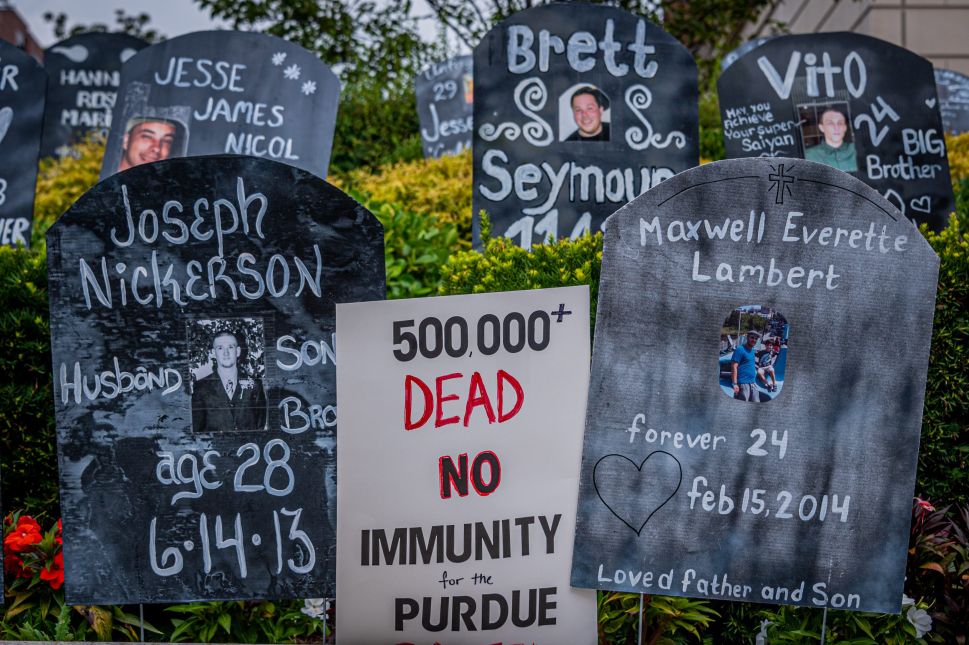