You may not know his name, but you definitely know of Phil Tippett’s work. The Oscar and Emmy Award-winning visual effects supervisor, producer and director has revolutionized creature design, stop-motion and computerized character animation, and is often paired with Ray Harryhausen as the two masters of stop-motion. Tippett has worked on everything from Star Wars and RoboCop, to Piranha and Starship Troopers.

Tippett is perhaps best known for his work on Steven Spielberg’s Jurassic Park, which combined Tippet’s stop-motion techniques with CGI in order to dinosaurs to life (and gave birth to the “Dinosaur Supervisor” meme).

But in his spare time Tippett has spent the last 30 years crafting his first feature film, Mad God, a cacophony of savagery, nightmarish imagery, and enough gruesome deaths to rival a slasher movie.

“I started working on the film after Robocop 2, I had a crew and we shot on 35 millimeters film, about three minutes of it,” he tells Observer. “But the scope of the job was just too big and I realized that it was impossible.”

A few decades, technological revolutions, and Kickstarter pushes later, the impossible has arrived. A stop-motion descent into hell, the movie evokes everything from Dante to John Milton and Hieronymus Bosch. Observer caught up with Tippett ahead of the film’s North American premiere as part of 2021’s Fantasia Festival to discuss the making of Mad God, its influences, mixing live-action with stop-motion, and more.

Observer: The movie shares some visual resemblance to German expressionism and the works of Dante and Milton, what inspired you when making Mad God?

Phil Tippett: My wife worked on Amadeus, and I once asked Miloš Forman for advice to a young filmmaker and he gave me the best advice I ever got, which was: “If you want to take a good shit, you have to eat well.” And that really validated the next six years, I fed myself on Dante, art history, archeology, theology, everything but the kitchen sink. I just absorbed it all.

Did you always plan to make the movie without dialogue? How did that impact the way you told the story?

So I’m a big admirer of silent movies and I feel that cinema just kind of went to hell once dialogue came. It just set the course for a different kind of three-act structure. When sound came, the whole industry changed into more commercial movies where the studios would get books like Gone With the Wind and develop those features. And it really, from my point of view, was kind of a prison, it didn’t allow for more creativity than what was culturally accepted. So I am very influenced by silent movies and expressionists movies and the way they express the stories.

I would spend the evenings or days off working on Mad God, out of a 15-page outline, and I just spent the next 20 years plugging away at it.

What surprised you about working as a director?

I actually pretty much knew where I was going. I’m not that much driven by intention, I work more from the unconscious. I’m a very prolific dreamer and while I was looking for the very rock narrative structure, I wrote down a bunch of my dreams. I went back and looked at them to see if there was any pattern. And there was, there was a beginning, there was kind of a statement, and the hints of a resolution to the first statement. So it was very helpful as a conceptual guide for making the concept go.

I was impressed by the sets and the huge production of the movie and the practicality of the sets.

Yes, it was totally practical. You know, I was the producer and director, so I could do whatever I want. So I didn’t adhere to schedules or anything, it was very convenient, I just took my time instead of forcing myself, and I think that worked really well.

I started working on the film after Robocop 2, I had a crew and we shot on 35 millimeters film, about three minutes of it. But the scope of the job was just too big and I realized that it was impossible. Then when the computer graphics boom hit I just had to rethink everything in relation to visual effects. So I would spend the evenings or days off working on Mad God, out of a 15-page outline, and I just spent the next 20 years plugging away at it.

Around the year 2000, I was in my studio and a couple of the guys that were inspired by Robocop and Star Wars and all that came in wanting to work with lights and cameras and models sets, but that train had left the station. So they offered to do a few shots and back out, but then it just exploded. I got a bunch of volunteers on the weekends and that’s what allowed me to get there.

I found it interesting that you mix stop-motion with some live-action scenes and even a bit of CGI, I think. Can you talk about the mixing of formats?

That was just what I needed. I’m actually not that big of a fan of animation, you know. To me it’s more a means to an end. I look at the work of Fleischer and the Warner Brothers cartoons and the Tex Avery stuff from the ’30s and ’40s, so I’m pretty aware of the whole history. But I just used whatever technique was appropriate. Like most of it had to be stop motion and puppetry, but some had to be live-action.

I was also influenced quite a bit by the surrealist artist Joseph Cornell. He’d go to junk stores and antique shops and buy all these objects that were interesting and put them in boxes with different labels. So I just collected stuff like Cornell and kept it until I could figure out how I could use them. And then it hits you all of a sudden it hits you and you know how it all fits. I just absorbed the stuff.

How did Alex Cox become involved in the movie?

Alex and I go way back. We once tried to develop this film called Mars Attacks based on the series of bubblegum trading cards in the ’80s, before the project went to Tim Burton. When we couldn’t get the project going, we still stayed in touch and over the years, our studios collaborated on some projects, with him now appearing in Mad God. 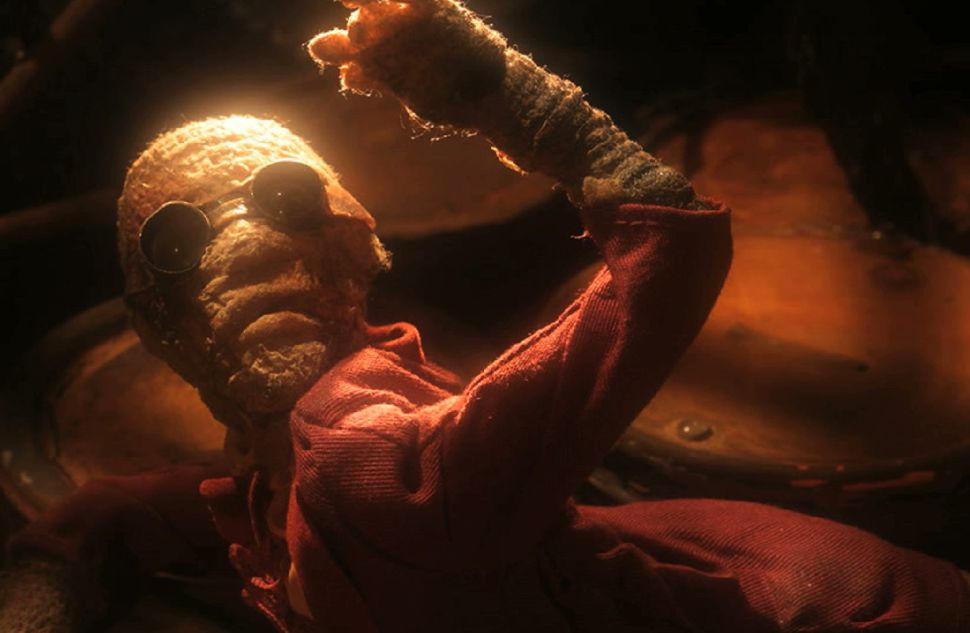