Any royal enthusiasts that happen to be in the U.K. (or more specifically, London) right now are in for a real treat. The statue of Princess Diana, which was installed in the Sunken Garden at Kensington Palace on July 1, will be specially opened to the public on Tuesday, August 31, in honor of the 24th anniversary of her death.

Over the past year, Kensington Palace and its surrounding grounds and gardens has been only been open to visitors from Wednesday through Sunday due to the coronavirus pandemic. For the upcoming anniversary, Historic Royal Palaces, which oversees six royal properties in the U.K., said that special arrangements have been made so that visitors will be able to see the statue from Cradle Walk (the walkway around the Sunken Garden at Kensington Palace) on August 31 from 3 pm to 5 pm.

A spokesperson for Historic Royal Palaces told Hello that there will be “interest in viewing the statue” on the anniversary. “We will be opening that up, freely available, for passersby or anybody who wants to stop and take a moment on that Tuesday, specially for the anniversary.” Entry will be entirely free, and doesn’t need to be booked in advance.

The Princess of Wales died in a car crash in Paris on August 31, 1997, when Prince William was 15 and Prince Harry was 12. Her sons commissioned this statue in her honor back in 2017; the final product, designed by sculptor Ian Rank-Broadley, was unveiled in a private ceremony last month. The Duke of Sussex flew from California to England for the installation; it was only the second time he had returned to the U.K. since he and Meghan Markle moved to Santa Barbara last year.

While the ceremony was initially planned as a larger celebration, the guest list was slimmed down due to the coronavirus pandemic, and aside from Prince William and Prince Harry, was limited to just Princess Diana’s immediate family, as well as the sculptor and the garden designer.

The bronze statue depicts Princess Diana surrounded by three children, with a plinth underneath that is engraved with Diana’s name and the date of the unveiling. A paving stone in front is engraved with an excerpt from the poem The Measure of a Man.

The Sunken Garden at Kensington Palace was one of Princess Diana’s favorite places, and it was redesigned prior to the statue installation. Workers spent over 1,000 hours tending to the garden, and put a special emphasis on Diana’s favored forget-me-nots.

Aside from the statue, there’s another very special piece of royal history that visitors can go see at KP right now. Princess Diana’s iconic wedding dress, which she wore to 1981 royal nuptials, is currently on display at Kensington Palace as part of the “Royal Style in the Making” exhibit. 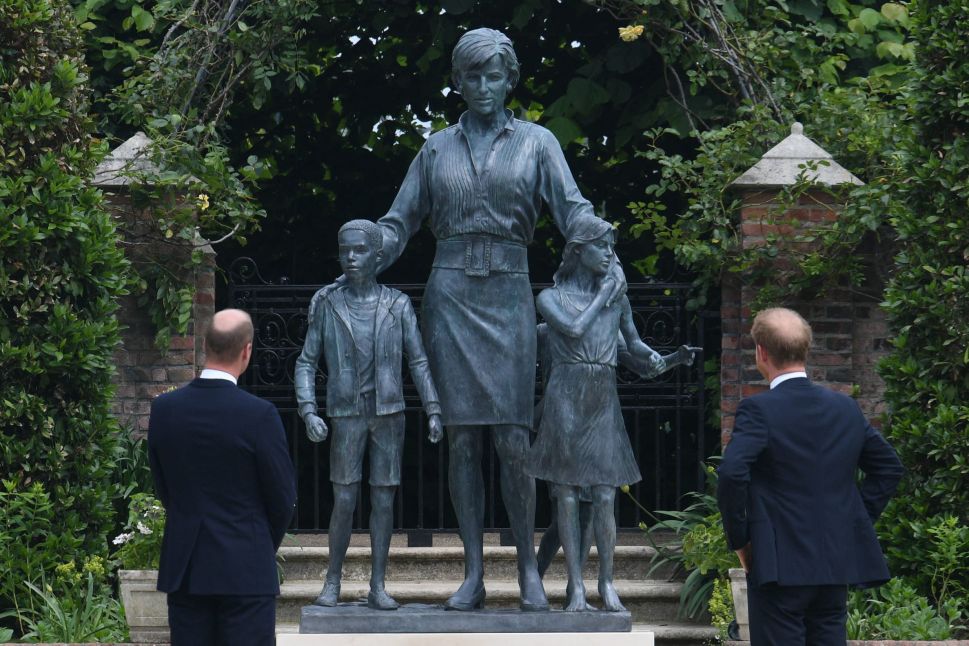