“I was a huge fan — I don’t even know how to describe how much,” Tracey Scott Wilson, screenwriter of Respect, tells Observer of Aretha Franklin. “She was part of my DNA and my life. I grew up listening to her all the time. I thought I knew about her, but I didn’t know anything.”

Respect, in theaters August 13, is Hollywood’s latest musical biopic, telling Franklin’s story from her childhood to her 1972 album Amazing Grace. Franklin herself was involved in the project before her death in 2018 and approved the casting of Jennifer Hudson, who gives a transformative performance as the singer. Director Liesl Tommy, Wilson’s long-time friend and collaborator, brought Wilson on board to write the film and Wilson quickly immersed herself in a crash course on Franklin’s life and career.

“I was brought on in May [2019] and we were shooting by October,” Wilson remembers. “I had to learn everything really. I was so interested in her. Because of my previous work I did know a lot about the time period, but it was a joy to watch videos of [Aretha] and read about her. It was a joy to learn about her every day.”

She’s just so important. There’s not many musical biopics about Black women in general. It was really important to us to represent her as she was, with a lot of love and care.

She adds, “There was a lot of pressure. It’s one of those things where you want to get it right. She’s just so important. There’s not many musical biopics about Black women in general. It was really important to us to represent her as she was, with a lot of love and care.”

Wilson met with Franklin’s relatives, including her niece Sabrina Owens and her cousin Brenda Corbett, who sang with Franklin. Members of Franklin’s family also came to the film’s set several times and Wilson says they were “very involved in the process.” The family has since seen the finished movie — the studio recently screened it privately in Detroit for the late singer’s friends and family — and Wilson is gratified that this take on Franklin’s story has their approval. (National Geographic’s recent Genius: Aretha did not.)

“I watched a lot of musical biopics in preparation and I have the sense that does not happen usually,” Wilson notes. “We were really, really anxious about what the family thought. And they were happy with it.”

While many viewers will likely be familiar with Franklin’s more recent work, Respect reveals the decades of hardship and effort that helped create the Queen of Soul. Franklin’s childhood, which saw her pregnant at age 12, and her teen years, when she sang in her father’s church, are the foundation of the story, and Respect reveals just how Franklin became one of the most famous singers in recent history. Tommy originally pitched Respect as centering on a specific period of Franklin’s life, from age 10 to age 30, which helped Wilson know how to structure the screenplay.

“Within that framework Liesl wanted to answer the question ‘How does the woman with the greatest voice of all time find her own voice?’” says Wilson, who specifically looked at films like Coal Miner’s Daughter, Ray and La Vie En Rose as inspiration. “Those perimeters were very helpful because obviously she had a very long and very rich and very complicated life. That really helped me to craft the story and to answer the question. Aretha is just there — if you turn on the radio right now you’ll hear one of her songs — and people have their own Aretha in their heads, as I did. So I think it’s really great to be able to show people new things about her.”

Some aspects of Franklin’s story are jarring, like the fact that she gave birth to her first son at age 12 and her second two years later. Her first husband, Ted White, who also managed her career, was abusive and controlling. Respect handles both of these scenarios with delicacy, especially Franklin’s teen pregnancies. The film insinuates what happened to Franklin as a young girl, suggesting she was coerced by a family friend during a party, but the filmmakers didn’t want to make it overt.

“That was something Liesl and I discussed extensively,” Wilson explains. “We wanted to make sure we did it in a way that was tasteful and not exploitive and in a way that also showed the pain of that. It’s something we discussed at length. I think [teen pregnancy] is something that has happened throughout time, but back then it was just not discussed. The extraordinary part of her story is that she had the support of her family and through the support of her family she was able to craft and create the career that did. Many other girls did not have that support.”

The film’s title comes from Franklin’s 1967 international hit “Respect,” which rearranged Otis Redding’s original, but it also has a greater meaning. Franklin’s early years were defined by the men around her, who dictated her life and career, and Respect is ultimately about what it means for a woman, especially a Black woman, to break out of that cycle.

“‘Respect’ is an anthem for the Black power movement, for the women’s rights movement, for the gay rights movement — it’s become a national anthem for political movements all over the world,” Wilson says. “In the movie she sings it before she even claims it for herself. It was important to show the picture of the culture she grew up in, within her own family and in the culture at large. And to show what it is she ended up standing up for. Her father, obviously, was a hugely famous minister and Ted, as well, was a very strong man. It was important to show these two men and how she needed to find her own voice by letting them both go, in different ways.”

Respect is Wilson’s first film, but the writer, who has previously written for FX’s The Americans and Fosse/Verdon, is anticipating more features. Writing Franklin’s story has shown her the possibility of film.

“I’ve caught this movie bug now,” Wilson says. “I love it and I want to make another one. I love the ability to tell a larger story, the level of artistry and collaboration that goes on it in. There’s a limitlessness to the kinds of things you can imagine and the stories you could tell. There’s nothing more thrilling than to see your movie on a big screen.” 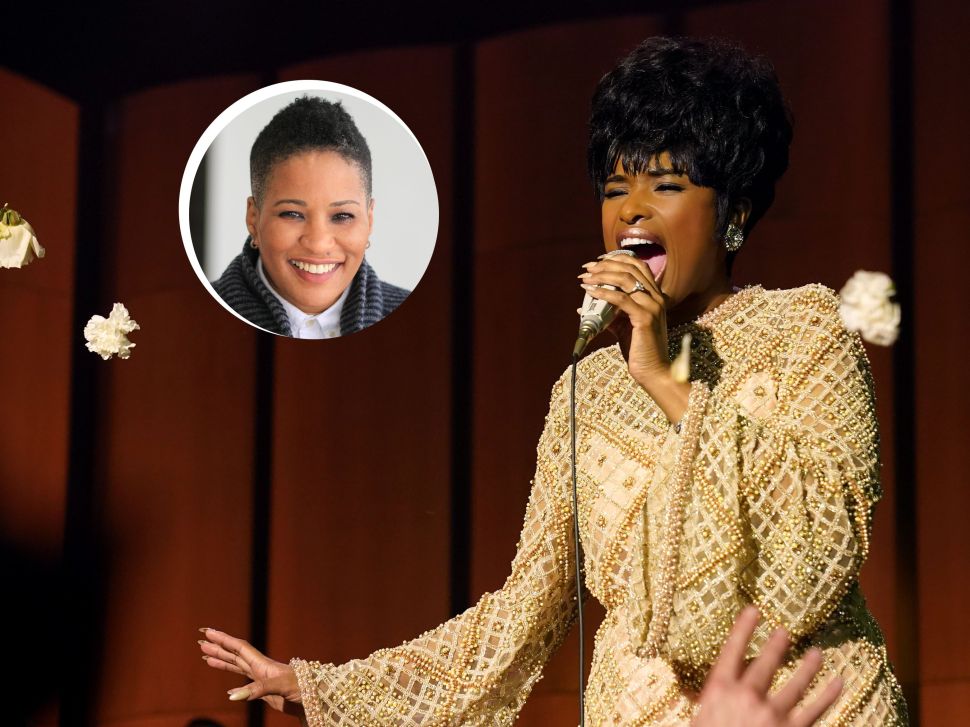