In the small seaside parish of Oulton Broad, near Loweston, Suffolk in the UK, a piece of street art attributed to the superstar graffiti artist, Banksy, has been partially removed. The mural appeared last week along the mossy, brick Landspring Drain Bridge in Nicholas Everitt Park. In classic Banksy style, it depicts three children standing in a boat. The children are two-dimensional, however, the “boat” is a piece of corrugated iron that juts out of the wall. Painted above the children, in white, is the statement We’re All In The Same Boat. Rain and potential floods have been forecast, and Oulton Broad Parish Council told the BBC that the “boat” section of the painting was removed because it blocked the drain.

The mural, done using Banksy’s characteristic stencil technique, and using the natural contours of the wall for background, depicts three small boys wearing sailor hats made of newspaper and 1930s-era Little Rascals-style clothing. The boat is sinking and the smallest child at the stern bails it out with a bucket. The child at the bow, wearing a sailor costume, gazes ahead through a rolled up newspaper “telescope,” while the middle child grabs hold of the “captain” and anxiously looks behind him to watch the boy bailing out the boat. The boat appears to be sinking fast, but the ship’s small captain seems unconcerned.

We’re All In The Same Boat isn’t the only unclaimed piece of Banksy art in the area. Nearby, on a wall outside the shuttered Lowestoft Electrical shop on London Road North, another work done in Banksy’s unmistakable style has been spotted. Here, a small child wearing a sunhat builds a sandcastle using a crowbar. The sand is literal sand that has been dug up and piled in front of the child.

These works are among several murals, widely attributed to Banksy, but still unclaimed, that have sprung up in the East of England in the last week. They include one on Admiralty Road in Great Yarmouth of a couple dancing over a bus stop. An accordionist appears to sit on the bus stop serenading them. Another, painted on a sea wall in Gorleston, depicts a crane, of the kind found in games in seaside penny arcades, hovering over a bench. The Merrivale Model Village in Great Yarmouth, a model of an English countryside village, now sports two suspected Banksys on two of its half-timbered toy houses. One depicts a rat balancing on a three-dimensional wagon wheel, with “Go Big Or Go Home” scrawled across the house. Another, a miniature thatched barn, has “Banksy” painted across it in red.

Professor Paul Gough, Banksy expert and principal and vice chancellor of Arts University Bournemouth, told the BBC that he is fairly certain the works are either by Banksy or convincing imitations. “Banksy has clearly been enjoying an East Anglian staycation,” he told the BBC, “these are very sophisticated stencils showing an artist at the top of his game.” The key, he said, to determining whether these are legitimate Banksys is their contexts. These works are all in beautiful spaces and contain Banksy’s wit and whimsy in the manner in which they use their contexts.

A spokesperson for Oulton Broad Parish Council told the BBC that the metal boat in “We’re All in the Same Boat” would be removed only temporarily and replaced when the weather clears up. 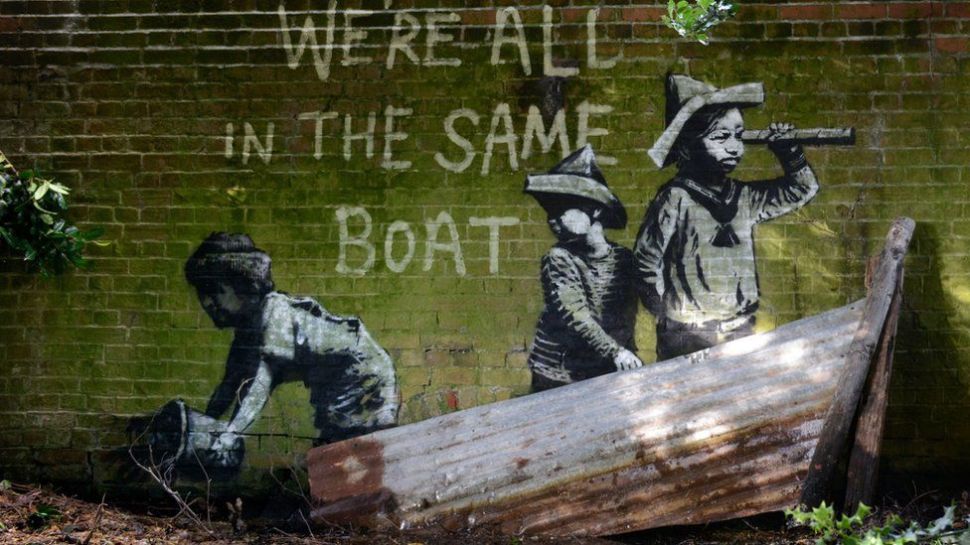