Claude Monet has 73k followers on Twitter, Vincent Van Gogh has racked up 66k and Gustav Klimt is on 34k. The famed painters are extremely active, posting images of their artworks multiple times a day. These back-from-the-dead artists have been resurrected on Twitter thanks to coder Andrei Taraschuk and his social media bots. These are software applications that post automatically on Twitter, and they’ve cornered a market. Hungry for culture, especially amid pandemic museum closures, followers are finding comfort and relief in the daily dose of art. And other cultural bots are experiencing growing fame too.

The Banks of the Seine at Argenteuil, 1872 #monet #impressionism pic.twitter.com/EOSYKY9s6A

As Taraschuk explains to Observer, a bot is essentially a social media account that performs particular tasks on autopilot, without the need for human control. Platforms like Twitter are full of accounts users may never suspect are automatically run, including bots that share weather updates, stock prices, and even vaccine information. In these cases, they are advantageous for their ability to post updates much more punctually than a human could.

Taraschuk, along with co-founder data strategist Cody Braun, specializes in bots that post art. “Art is a highly visual medium and it fits perfectly within the context of a social media feed,” Taraschuk says. “It is beautiful, it does not get old no matter how much you look at it, and it does not require additional context.” Taraschuk and Braun now have over 1,000 bots in total across various social media platforms which pump out content such as original artworks, relevant art news and recommendations of stylistically similar art. Were the artists not dead, one could easily be fooled into thinking a real person was behind each account.

Taraschuk’s initial foray into bot-making was prompted merely by the desire to enliven his own Twitter timeline with attractive art. However, over time he realized he wasn’t the only one who was tired of what he calls “all the negativity and politics on social media.” As such, he began to make accounts for everyone from Edvard Munch to Mary Cassatt. The artworks the bots post come from various public sources such as Wikimedia and Wikiart and open museum collections like The Met, MoMA and the Rijksmuseum. Taraschuk also works closely with the Europeana collection of digitized images and texts and the OpenGLAM (open galleries, libraries, archives, museums) community. It is not always easy to find open access content, something Taraschuk hopes might change. “The idea is to encourage world’s museums to open their digital collections and make their content available to projects like the art bots,” says Taraschuk.

His bots have gained unexpected popularity, now reaching millions of social media users. And with people around the world cut off from culture during the coronavirus pandemic, numbers have soared even higher. “The combination of gallery closures and the fact that people were spending more time online contributed to the growing interest in the art bots,” Taraschuk says. In July this year, the bots shared a staggering 237,125 artworks and received 3.1 million likes.

After seeing such a positive response, Taraschuk and Braun’s current mission is to “share all of the world’s art and turn social media into the world’s biggest and most open museum.” With no restrictions in terms of hanging space or visitor numbers, it is not as overambitious as it sounds. The pair also want to add contemporary artists, photographers, and creators to the community. “The idea is to offer creatives an easy way to launch their own bots on social media,” Taraschuk says, “Imagine how great it would be if every piece of art that was ever created was shared on social media!”

"Against the Background of Space"
Victor Zaretsky, 1960 pic.twitter.com/AEpT7FzOxz

When these snippets of poetry or intriguing artworks pop up on a Twitter feed, it feels like respite from the habitual doom scrolling and an opportunity to learn about some novel cultural nugget. Another bot creator, John Emerson, tells Observer that it was this that inspired him to make his museum and gallery accounts. “I had followed a couple of bots on Twitter, including Darius Kazemi’s original @MuseumBot, which posted random objects from the collection of the Metropolitan Museum of Art,” Emerson says. “This struck me as an excellent way to wander through the archives, to stumble serendipitously through the thousands of objects that will never be on display within the limited space of the physical museum, or within the limited time of a typical visit.”

Emerson now has 16 museum bots, which include the Cooper-Hewitt Design Museum in New York City, the Rijksmuseum in Amsterdam and the Victoria and Albert Museum in London. They post a random image from the website or collection four times a day. Emerson also runs an account that posts Japanese woodblock prints and another that posts randomly selected pages from an online comic book archive.

Like Taraschuk’s bots, they are booming in popularity. But skeptics may question the way all these bots encourage people to interact with art. Without the art historical and socio-political context that a gallery collection provides, are the artworks in danger of becoming pretty but meaningless distractions? Emerson argues that the bite-sized pieces of culture the bots post actually allow users to delve much deeper into a museum’s collection than would be possible in a physical visit. In fact, his bots have exposed all sorts of eccentricities within institutions’ collections. “I’ve found the Cooper-Hewitt has a very large collection of match safes (which inspired another bot project). The Tate has digitized every page of Turner’s sketchbooks, even the blank ones and the Louvre seems to sit atop a great pile of fragments of antiquities.”

Similarly, another bot for the artist Hieronymus Bosch created by IT consultant Nig Thomas gives users the chance to get much closer to the Dutch master’s art than in an in-person viewing. The Bosch bot posts segments of the monumental, action-packed Garden of Earthly Delights triptych allowing viewers to study specific elements of the painting in detail. A particular favorite of followers was a close-up of a man astride a giant fish with his backside proffered to the viewer.

Although the art bots can never substitute the experience of a gallery visit, they at least offer a novel and complementary perspective on art appreciation. There is so much variety of content available that it can cater to nearly every individual preference. As Emerson says, people follow these bots because “Sometimes [they] want a moment of delight or humor, sometimes a creative spark or provocation, sometimes they need reassurance, recognition, or nostalgia.” But to become the “open museum” of Taraschuk’s dreams, it is possible they’ll need a little more (human) hands on curation to guide virtual visitors through the stream of images. 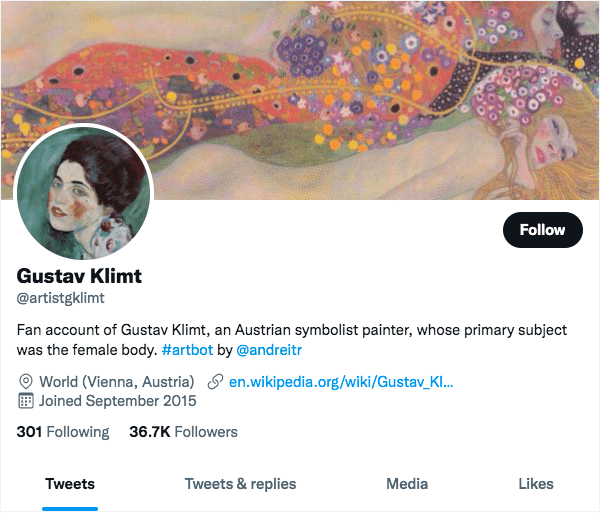