Japanese fashion tycoon Yusaku Maezawa, who signed up to be SpaceX’s first customer to fly to the moon aboard a Starship spacecraft in 2023, has been looking for a few like-minded space enthusiasts to join him on the voyage—all expenses paid. The search is now in the final stage of screening as the billionaire has narrowed the selection down to just 20 finalists.

Maezawa is the founder of Japanese fast fashion giant Zozotown. An avid art collector, Maezawa limited the search to artists. But the definition is loose. “Every single person who is doing something creative with their lives, aren’t they all artists?…If you see yourself as an artist, then you are an artist,” the entrepreneur said in March when announcing the search, dubbed Project dearMoon.

Four months and more than a million applications later, Maezawa has set his eye on 20 people. “Coming close to the end of the selection process for dearMoon!” he wrote in an Instagram post on July 15.

A YouTube video posted by Maezawa the same day featured a selection of applicants explaining what they hoped to accomplish on the trip. The finalists span a wide range of artistic professions, including painters, dancers, DJs, photographers and even Olympics gold medalists.

“I would consider this to be the most ambitious and probably one of the greatest artistic collaborations ever,” one of the 20 finalists, Vancouver artist Boris Moshenkov, said in an Instagram video last month. “That’s what gives me goosebumps every time I think about the project.”

Tracy Fanara, a scientist at the National Oceanic and Atmospheric Administration (NOAA) who creates space-themed art in her free time, was in the final round.

These 20 finalists will compete for eight seats on the SpaceX flight. Also flying along will be a few SpaceX employees, making the total crew 10 to 12 people.

The civilian crew will not actually land on the moon, but flying around it. It will take them three day to reach the moon, less than one day to loop around it, and three days to return to Earth.

Maezawa signed up to be SpaceX’s first moon passenger in September 2018 and reportedly put down a hefty deposit. He is expected to fly in a Starship spacecraft, which is being tested to reach Earth’s orbit. 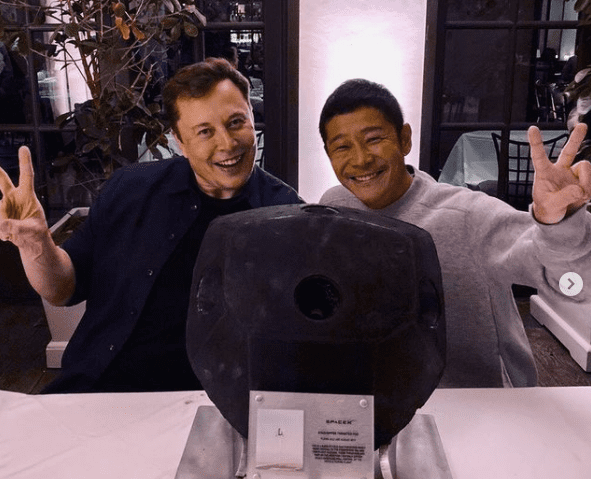