After eight seasons of playing the titular character on Arrow, the show that launched the Arrowverse and kick-started his career in the United States, Stephen Amell was hesitant to lead another major show.

But after reading the first 15 pages of a new pilot called Heels in the summer of 2019, the Canadian actor, who was still in the middle of filming the final season of the long-running superhero series, began setting his sights on a show that combined his love for acting with his lifelong affinity for professional wrestling. “After I put down the first script, I called my manager and I said, ‘Okay, it’s time to do this deal. Let’s go!’” Amell tells Observer.

Everyone that you see on WWE or AEW or whatever, they’ve all wrestled in a Duffy Dome.

Created by Loki head writer Michael Waldron, the small-town pro wrestling drama follows a family-owned wrestling promotion in Georgia where two brothers and bitter rivals, Jack (Amell) and Ace Spade (Vikings’ Alexander Ludwig), spar over their late father’s legacy both inside and outside of the ring. In the ring, younger brother Ace plays the face (or the hero) who is supposed to win every match, while older brother Jack, who scripts each fight and has assumed the all-encompassing responsibility of running the family’s Duffy Wrestling League, plays the heel (or the villain). But in the real world, those characters can be hard to live up to — or hard to leave behind.

In a brief phone interview, Amell speaks with Observer about the appeal of highlighting the indie circuits of professional wrestling in a scripted show, the overarching question of the eight-episode freshman season, and the defining characteristic of a really good heel.

Observer: As a lifelong fan of professional wrestling, what was it about these indie circuits that really appealed to you?

Stephen Amell: Well, I’m a big pro wrestling fan, and I think that the indie circuits are the lifeblood of pro wrestling. And yet, not a lot of people know about them. Everyone that you see on WWE or AEW or whatever, they’ve all wrestled in a Duffy Dome. I was just chatting with Chris Jericho, who’s one of the greatest wrestlers of all time, and when I brought up the Duffy Dome, he was like, “Oh, yeah. My first match was at a spot called Moose-something, in between Edmonton and Calgary.” If people do it, there’s the occasional guy or gal that makes it big. But more often than not, it’s just people who do it because they love it. That’s something that I don’t think has been showcased with professional wrestling, so I’m glad that we’re getting a chance to do it.

There are so many layers to Jack’s character because, at least on a superficial level, he appears to be this tough guy inside and outside of the ring. But he is still shouldering the burden of the family business and trying to be the best husband and father that he can be. How did you go about translating what was on the page to the screen?

Michael Waldron and Mike O’Malley, the creator of our show and the showrunner, respectively, did 90% of the heavy-lifting. And the other 9% was the performances of Alexander, Alison [Luff], Chris [Bauer], Mary [McCormack], Allen [Maldonado] and James [Harrison] — you name it, but I can just go down the list. And the following 1% was me trying not to pronounce the second T in Atlanta when I’m talking with the accent! But I’m not joking around when I say everything was on the page. It was such a fully fleshed out world that the moment I put on Jack’s uniform, boots, jeans, t-shirt, it just felt like it was all there. I tried to not fuck it up — pardon my language!

From the outset, it is clear that Jack is stretching himself a little too thin both personally and professionally. How much is he really willing to sacrifice personally as a husband and father in favour of keeping the DWL alive?

Well, that right there is another thing that we can put on the poster, because that’s the crux of the first season. How far is Jack willing to go? At what point does his role in the DWL supersede his role as a husband, brother, father, son, friend? That’s what he’s really struggling with. That’s what everyone [in the show] is struggling with too, because the whole first season is about people that are aspirational. They’re a small town, and they love the value of where they live and where they’re from, but they want more. And it’s like, What lengths are you willing to go to get there? That’s what we examine with Jack in the first season.

If I was a wrestling villain and there was a kid in the crowd, I would want that kid to cry and have nightmares, because he’s afraid of Jack Spade.

You and Alexander seem to share a really close off-screen bond that seems to translate into a really tense onscreen one. How have you worked together to build that trust and that dynamic that is intrinsic to the foundation of this show?

Look, I’m just lucky that I got a fellow Canadian as a co-star. (Laughs.) He cares, he’s passionate and thoughtful. I could tell immediately upon meeting him that his goal had nothing to do with him — it had to do with the show. And my goal has nothing to do with me — it has to do with this show. That immediately makes us bond. Both of us came off of very demanding, all-encompassing roles on television series, and we understand what it takes to get something like this done. I’m not saying that we’re doing it perfectly, but it was just clear immediately that we’re both pulling in the same direction. Both of us have a lot of passion, and I’m very happy that it seems to be translating to the screen.

How does that relationship between Jack and Ace evolve after the pivotal scene at the end of the premiere?

Poorly. Jack screws him over, and it simmers throughout the rest of the first season. And ultimately, it all comes crashing down in a way that will hopefully make you want to watch Season 2… If we’re lucky enough to be able to make one…

The stunt work on this show is phenomenal, but you can’t really fake a lot of the choreography. How difficult was it for you to do those intricate sequences in the middle of a pandemic?

Well, it was hard. I give a lot of credit to the people that played extras on the show, because they had to be a part of not just the show but also all our protocols. I’ve gotta tell you: In a pandemic, when you’re not really allowed to really interact with people, it was kind of nice to get sweaty with someone else and lock up and trade punches, to be perfectly honest with you. It was nice!

Why do you think modern viewers are so attracted to heels or the villains of different stories? What makes a good heel or villain?

Well, storytelling, and I think the thing that makes a really good heel in the wrestling business is commitment. Are you actually prepared for people to hate you? Are you really prepared to go all the way? Because a lot of people are fake villains. They’re the too-cool-for-school people who want to seem like the bad guys but secretly want to be liked. The really good villains are the ones that don’t care, and that’s what I tried to do with Jack. When I would go out to the ring, I would think to myself, If this were real life, if I was a wrestling villain and there was a kid in the crowd, I would want that kid to cry and have nightmares, because he’s afraid of Jack Spade. That’s what I would think about, so I think the real definition of a villain is if you are willing to go all the way and commit.

Before I let you go, I’m going to ask you a two-part question: How would you say Arrow changed your life and your own perception of fame? And have you noticed a fundamental difference transitioning from broadcast television (The CW) to cable (Starz)?

For Arrow, it changed my definition of fame as far as if I go out and walk around now, I’m gonna sometimes get recognized. But more than that, it was the first thing in my life that really taught me the value of an honest day’s work — straight up. It gave me a work ethic, and I think that I can put that same work ethic towards a new show.

But transitioning from 23 episodes to eight, it’s just… I’m in the same industry, yeah. I’m on TV, yeah. And I’m not saying that being on cable is better, but it is just so fundamentally different that it’s like comparing apples to oranges. I’ve been very, very fortunate to be involved with The CW and Starz, respectively, with two really great networks—that are run by two really great gentlemen in Mark Pedowitz and Jeff Hirsch — that really stand behind the products that they make, and that just gives me a lot of freedom and comfort as an artist. I can’t speak highly enough about those guys.

The first two episodes of Heels are now available to stream, and one of the remaining six episodes will be released every Sunday. 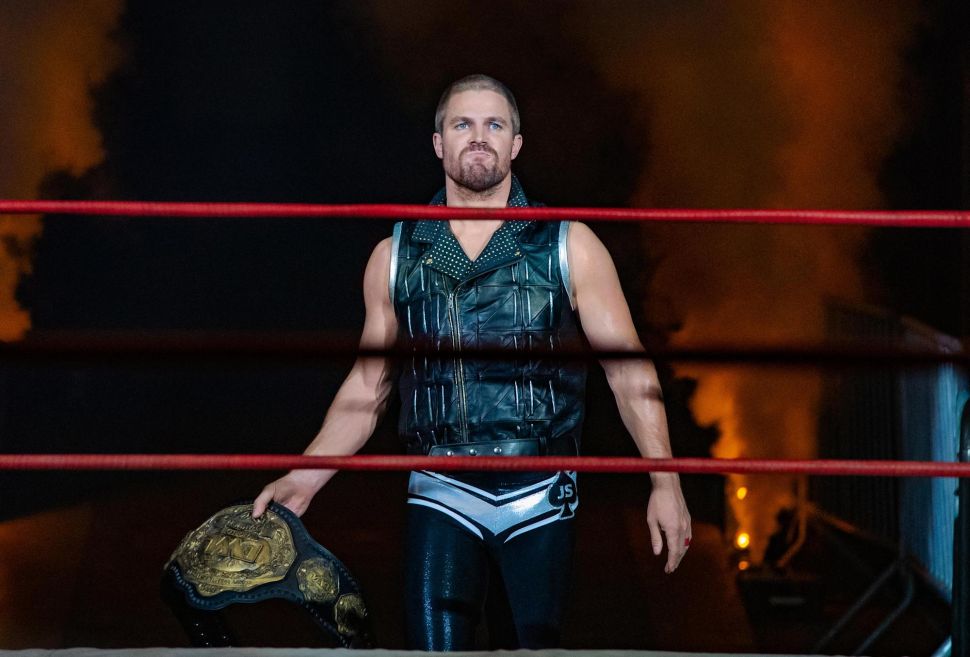